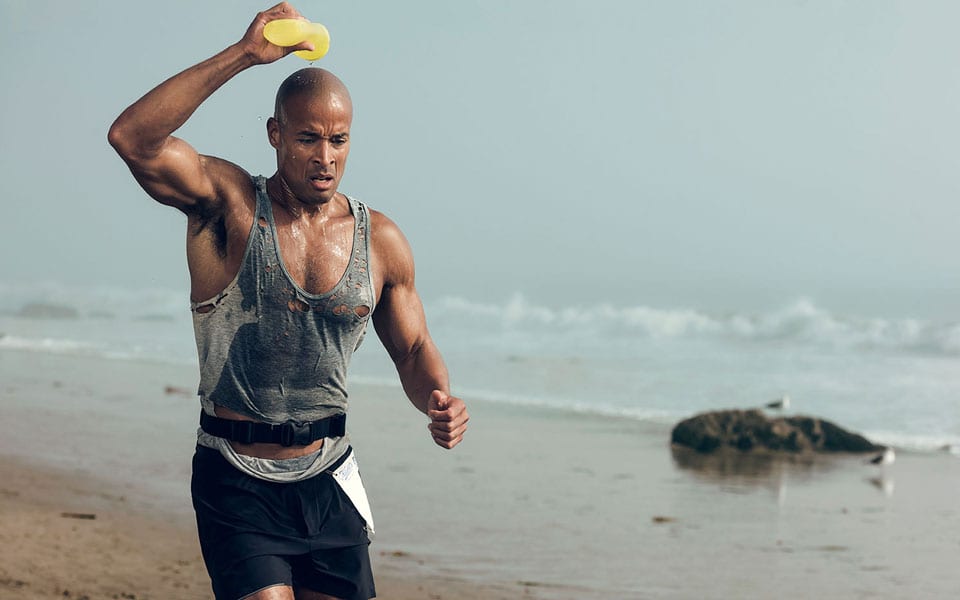 Not everyone can claim to have gripped the minds of (almost) every man between the ages of 20 and 40, in this Instagram obsessed era, for two full hours. But David Goggins has done this not just once, but twice, in his appearances on The Joe Rogan Experience – arguably the most popular podcast for men around.

So, why the appeal? Well, as you are about to see in the following workout videos, he is not another self-help guru skilled in nothing but talk.

First: context. David Goggins is the only man in history to complete elite training as a Navy SEAL, Army Ranger, and Air Force Tactical Air Controller, has set records in numerous endurance events (including doing 4,030 pull-ups in 17 hours and winning the Infinitus 88k) and has been named by Outside magazine as The Fittest (Real) Man in America.

So far so superhuman. But if you actually listen to his story, Goggins feels pain just as much as anyone – he has just learnt to overcome it.

And although you might expect Goggins to say he has got to this point in spite of a childhood of poverty, prejudice and physical abuse, as he has discussed at length with Joe Rogan, he credits this background with giving him the keys to success in the endurance space.

On that note: in a world where most men can be seen snapchatting between sets, Goggins’ latest workout reveals a training technique we should all adopt: setting the phone aside and focussing on your pain, rather than trying to take your mind off it.

“We’ve been working out hard in the gym for a month, but we haven’t seen any results… So we get all down. You study for a test and didn’t do as well as you thought. What the fuck did you expect? You’re not doing the work,” he captioned the Instagram post.

“It’s never enough until you feel this overwhelming feeling of shit: I’m outworking the crowd.”

“A lot of us are full of shit. We think we are doing more than what we truly are. We are under a false illusion that just because we are working, we deserve and are supposed to be exactly where we want to be in life,” Goggins added.

“But what the fuck are you basing that off of? I talked to a young college student the other day and he said he was working his ass off in school but not making the grades. I asked him against which he was measuring his hard work? He explained in high school he didn’t have to work that hard. So, he is measuring his level of work against a baseline of essentially nothing.”

According to Goggins, the same applies to the gym: “If you want to measure yourself against someone, make sure it is a person who is waking up early and going to bed late… We fill our heads full of bullshit on what hard work looks like… [but] the truth of the matter is that hard work does not look pretty, the effort behind it is sometimes mind-numbing.”

“The amount of focus involved is sometimes more than people can bear.”

Of course, Goggins acknowledges this forgotten technique of embracing the pain may not be for everyone (“like I say all the time – my message is not for everybody”), but he maintains that “until you can get to the raw truth about how hard you are really working, you will always be asking yourself, ‘Why haven’t I accomplished this yet or succeeded at that yet?'”

“Sometimes you need to just look at yourself when you are trying your hardest but still not succeeding and simply suck it the fuck up and say I still haven’t done enough. So when is it enough? Only you have the answer to that. What is ‘it’ worth to you?”

This in mind, it’s no wonder Goggins questions our reliance on music to get ourselves through a training session, something he made abundantly clear on Joe Rogan’s podcast.

“A lot of men like to put the headphones and listen to music… but what if that shit comes off? You get popped in your… mouth. Your headphones are on the sidewalk brother. What are you going to say to yourself then? I train my mind. I [imagine] I’m going to get popped round the back of an alley one day man…. and there’s going to be no music… you better figure it out.”

“What’s that flame inside of you that keeps you going? Let that keep you going. Not this.”

It may sound extreme, but if Goggins’ transformation from a depressed, overweight young man to a U.S Armed Forces icon and one of the world’s foremost endurance athletes is anything to go by, maybe dropping the headphones could (at least) take you from no six-pack to six-pack.

And even if it doesn’t, according to Goggans, it’s not about that anyway. It’s all about suffering – and building your mind.

Either you are getting better or you are getting worse. You sure as fuck are not staying the same! This is me coming out of the water looking like fucking Swamp Thing back in 1997. I sure as hell was getting worse. Through my life I found out a lot of things about myself. I found out you can never tell what you are made of during the good times, that’s something you must find out in the bad times. There were several times in life where I wanted to quit. And there were several times in life where I did quit. Having a mentality of giving yourself a way out helped get me to look how I did in that picture. There is a harsh reality in life. A reality that took me years to figure out. Everybody comes to a point in their life where they want to quit but it is what you do in that moment that determines who you are. I was hoping that the good Lord or the powers that be were going to gift wrap me a nice happy life. One that when I woke up there would be instant gratification, instant success, instant money, and a shit ton of happiness to go along with that. Well, Merry Fucking Christmas! As Jack Nicholson said, “While my existence grotesque and incomprehensible to you might end up saving you from the horrible existence I once lived.” You don’t have to allow your previous life make you feel, look, and act like a piece of shit! Own that motherfucker! Choke that motherfucker out! Attack it with a verocity of a lion going after its prey. As human beings, we all have the ability to fuck shit up. And when I say fuck that shit up, I mean that in a positive way. We have the ability to dominate, to overcome, to stand alone and to conquer! Don’t allow this weakened society to make you believe that it’s ok to just be a mediocre human being. Life isn’t about a trophy- but it sure is the fuck about achieving more than what you ever thought was possible! Stay hard always!