You wouldn’t normally think that your skating outfit can fit in at a high-class London affair, would you? But that’s the perks of being one of the most famous celebrity children in the world, you can pull off anything.

Brooklyn Beckham showed us all how to do just that when he appeared at his mother’s store for the Sotheby’s 275th Anniversary afterparty in London last night. While his famous parents, Victoria & David both opted for all-black slim outfits, Brooklyn chose to dress down for the evening in a casual Dickies jacket, brown chinos, and black hi-top converse. 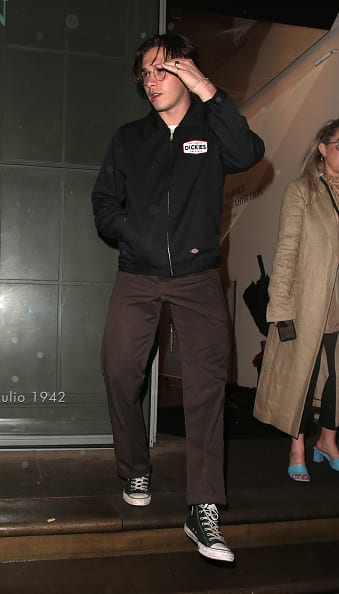 It was almost identical to the outfit he wore hours earlier at the skate park, which he posted on Instagram. The only difference between the after-party outfit and his skate park attire was his opting for converse over vans and sporting black pants at the skatepark but brown ones at Sotheby’s.

Still got it ❤️

For followers of Brooklyn, the jacket appears to be a favourite of the model who was snapped wearing the same one at an awards show at the beginning of the month. Despite showing off his swagger, the 20-year-old has certainly turned to his stylish father for inspiration. Brooklyn is also a fan of a bit of man jewellery and can be seen wearing a silver bracelet, a couple of rings and even a small black earing. He can often be seen wearing his assortment of bling along with an increasingly tattooed body, he may in fact beat his father’s ink count.

Not everyone can pull off the look but it certainly works for the model who has been the face of Burberry but has recently turned his hand at photography, working with UK publication Man About Town amongst other campaigns. He may not have the famous kick of his father but Brooklyn is working hard to make sure he is famous for his own skills.