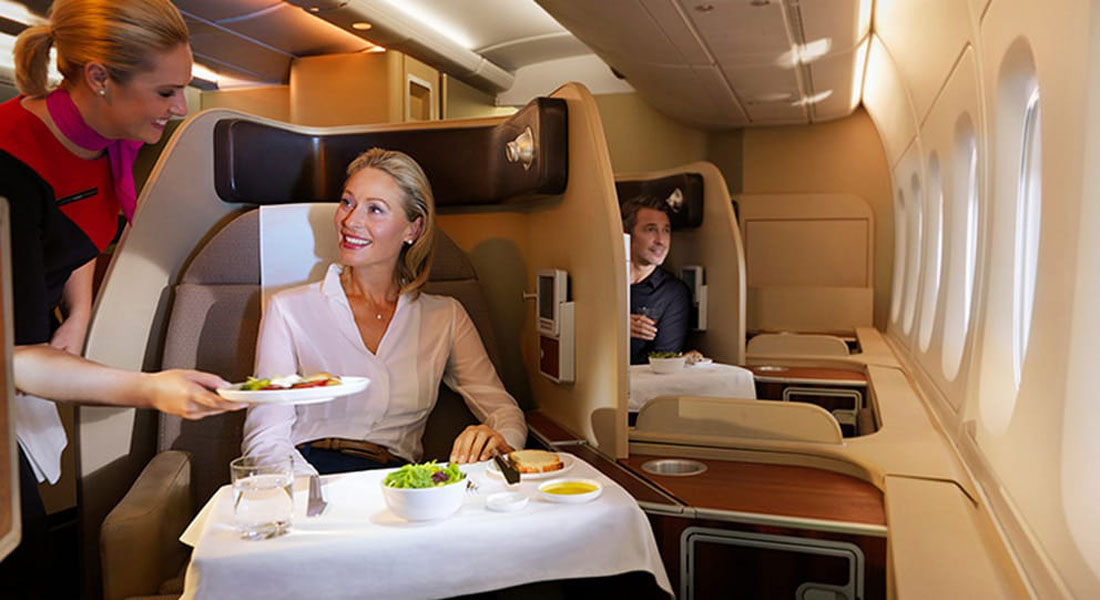 While this may sound simple, our discussion revealed there’s more to high-end customer service than asking your staff to be friendly.

This came about as the first of Qantas’ newly ‘interiored’ A380s took to the skies last week (for the first time since being refurbished), landing in Sydney on Wednesday where D’Marge was invited to take a sneak peek at the plane’s simmering new look.

This included a newly designed business class (out with the Skybed, in with the Qantas Business Suite), and a fresh-faced first class, bringing the A380 in line with the rest of Qantas’ long haul fleet.

“By the end of this upgrade, we’ll have next-generation seating across our entire long-haul fleet of A380s, A330s and 787s,” said Qantas CEO Alan Joyce.

“It will be consistent across the board which we haven’t had before; great for Qantas coming into its 100th year,” he told media.

Last Wednesday, D’Marge had the chance to put Qantas CEO Alan Joyce some questions of our own, asking what sets Qantas apart from its competitors when it comes to the Pointy End of the plane.

First up, Mr Joyce told us the other carriers drool over Qantas’ food: “Having travelled on all those different airlines, Qantas is miles ahead with what Neil Perry is doing and I think our customers have shown that is actually quite special.”

“Linked to [this] is the wines – we are the largest buyer of Aussie wines and Australian wines are just killing it out there… We get the best of the first-class wines – red, white, champagne etc.”

But even though the food is good, according to Mr Joyce, it’s not the number one differential: “The one thing we kill everyone else on is our people. Our staff are amazing; the cabin crew is probably the best trained in the world.”

“Our staff train at first-class restaurants like Rockpool in delivering service and safety, they go through some really good psychological training of understanding the customer and problem solving as well.”

“So… all of that,” Mr Joyce continued, combined with the fact that “the [hard] product is really good and competitive” makes Qantas one of the best first-class options in the world, even in a market which contains Etihad’s The Residence and Emirates’ futuristic first-class suites.

When it comes down to it though, “The soft product (the food, wine and drinks) makes us that much more special than all of the other airlines,” he added.