“Where’s the champagne at.” 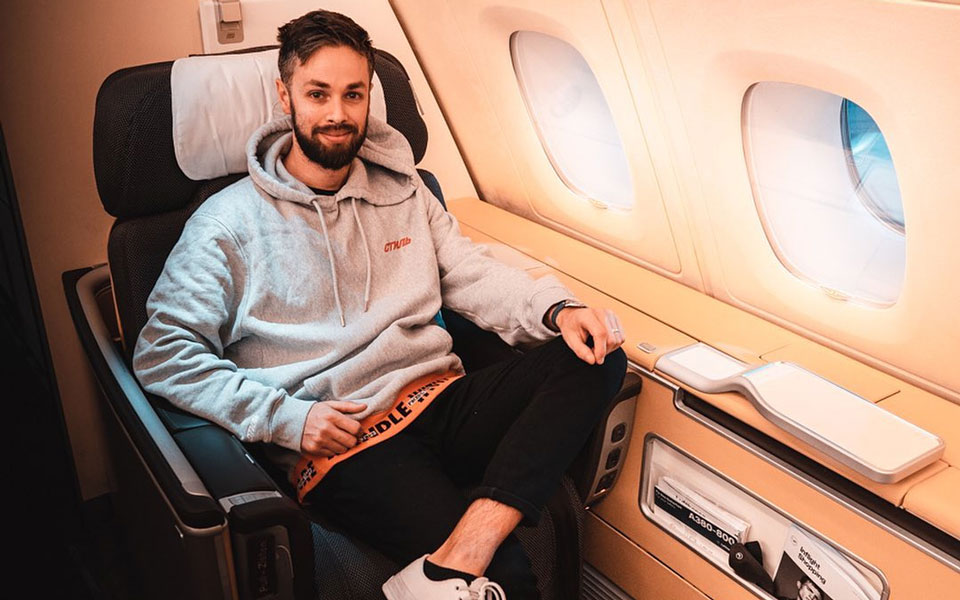 Frequent Flyer @ flighthacks showing us how it's done.

“Hell is other people” may be the most misunderstood quote of all time (Sartre was referring to other people’s judgement, not their annoying antics), but when it comes to business-class travellers’ Instagram accounts, it couldn’t be closer to the mark.

Enter: the humblebrag, the most abused social media tactic this side of the century. While anyone who hasn’t been on a technology detox since 2010 will already know what one is, for those that don’t, humble bragging is what you do when you’re proud of something, but embarrassed to flaunt it.

“If only I could afford this Dom Perignon when I wasn’t travelling for work, lol.”

You get the picture. In any case, humble-bragging has become such a fine art that traditional iterations (like the one above) are disappearing as faux-modest travellers find ever subtler ways to show off. Nowhere is this more prevalent than at the pointy end of an Emirates A380, a Qantas Dreamliner or an Etihad long-haul jumbo, where business-class travel bloggers and point hacking gurus attempt to coax their audiences into envisioning themselves in their position with language as casual as it is misleading.

No idea what I was saying but it must have been along the lines of: “where’s the champagne at?” #slammertime #singaporeairlines

To be fair, we too are guilty of the odd ‘self-deprecating show-off’ (who isn’t?), and wish most of these bloggers well. After all: it takes dedication and skill to build an audience on Instagram (despite what the millennial-slamming Murdoch press would have you believe). Plus: even if there are one or two (thousand) clumsy attempts at humble bragging out there, the only way to get better at it is practice. What we can’t accept, however, is the growing branch of internet literature that suggests humble-bragging can ever be classy.

Enter: the Tripadvisor threads and travel forums where business-class travellers discuss how to improve their humble brags. Case in point: The Points Guy’s article, “Tips on how to travel humblebrag with class.” In this piece, The Points Guy says it’s possible to share one’s business-class experiences without raising your friends’ heckles. In order to do this, he suggests you follow a number of rules.

While this advice is well-meaning, for us it misses the mark: rather than making your humblebrag classy, it turns it into something sneaky (trust us, we’ve tried). And it’s not just us who are of this school of thought – a Harvard Business School study found humble-bragging to be “a distinct and ineffective self-presentation strategy” which impacts negatively upon one’s “social outcomes.”

While their study investigated the overall phenomenon of humble-bragging, we believe its findings apply exquisitely to pointy end travellers. How so? Much in the same way that Sartre’s tortured characters in the infamous play ‘No Exit’ (which all takes place in a single, purgatory-like room) found that hell was other people (or rather, the lack of them) many business-class travellers simply cannot accept that a tree fell in the woods (or their A380 took off) if they don’t broadcast it – and receive recognition – from their friends and followers.

Of course, to play devil’s advocate, The Points Guy does point out in his article; it’s different if it is literally your job to broadcast this stuff – to which we say: fair point. But for anyone else who humble-brags their business-class antics, the aforementioned Harvard Business School study has some damning findings you ought to hear.

There are two types of humble-bragging, neither of them good

As the introductory to the report explains, “Across seven studies including a week-long diary study and a field experiment, we identify humblebragging – bragging masked by a complaint or humility – as a common, conceptually distinct, and ineffective form of self-presentation.”

“Both forms of humblebragging – complaint-based or humility-based – are less effective than straightforward bragging, as they reduce liking, perceived competence, and compliance with requests.”

Complaint-based humble brags are the worst

Humble-brags give away your mental state

The study also found that people choose to deploy humblebrags, “particularly when motivated both to elicit sympathy and impress others.

Confessions of a humble bragger…

To gain an insight into the twisted mind of a humble bragger, D’Marge hit up Immanuel Debeer, owner of Flight Hacks, a frequent flyer, travel blogger and prolific humble bragger. Here’s what he had to say.

Are you a humble bragger?

Aperol Spirtz at 42,000ft because why not! What’s your favourite in flight cocktail?

“I’m totally guilty; if you don’t know me and visit my IG profile you might think I’m an absolute knobhead, but the reality is that Instagram is just a place where I post pictures from my trips.”

“Sure it might be a brag, but it’s the result of hard work and sharing knowledge with my readers. Another thing is that I pay for my own travel, so when you see me humble bragging on Instagram it’s not because some brand paid me. This allows me to share my real opinion; if something is shit I share that too.”

“The worst brags are those by ‘influencers,’ you know, those people asking for free shit in exchange for a cool picture. Ugh. You can usually spot them sitting backwards in their business class seats.”

“If you’re a normal person that’s a big no no. However, because of their large following you usually get the imitators. As a result you get broken business class seats because everyone is sitting on the footrest (newsflash: it’s not designed to take your weight!).”

“That said,” Immanuel continued, “I have no animosity towards people that make a living on Instagram, good on them; I respect the hustle and their photography skills, but a lot of them don’t add value.”

After consulting the humble braggers (and indulging in a fair bit of it ourselves), we have decided there are various levels of sophistication to humble-bragging, but as a genre of literature – no matter how you spin it – it will always be more Bachelorette than Q&A. Instead, the best way to appear classy is to be classy. In other words: keep things real, admit what you’re doing, or don’t do it at all.