Not just a pretty face. 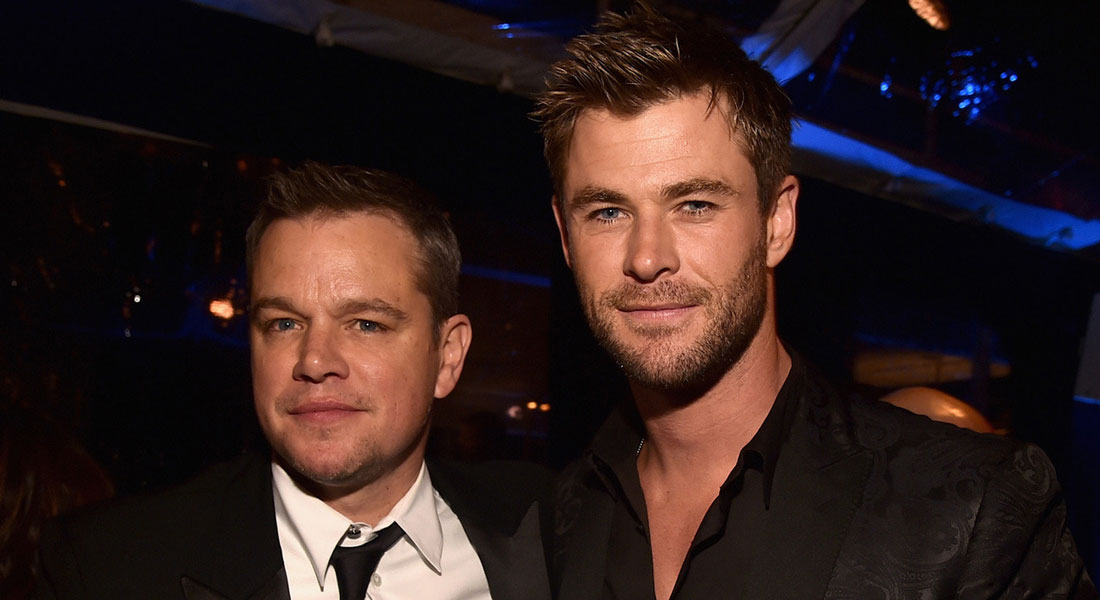 Bromance, or brotherly romance, is a term now ingrained in modern society, referring to ‘guy friends’ who have intimate relationships. Previous studies have found that men can, in fact, get more emotional satisfaction from a bromance than they do from a romantic relationship.

The male-to-male bond is becoming more popular and more accepted than ever, and burgeoning male celebrity relationships only add to this.

One such blossoming bromance is that of tougher-than-James-Bond Matt Damon and Australian poster boy Chris Hemsworth. The two Hollywood megastars can often be found attending events together in public or relaxing with their families behind closed doors. They’re so close in fact they even have matching tattoos, not of each other’s names, but three small dots on their little fingers.

And it only took one take…. Directed by the great @cristianprieto.filmmaker

Their relationship is a fine example that it’s ok for dudes to hang out with one another and share intimate moments without being self-conscious. This is a practice seen all across Australia, as guys will regularly go for dinner or drinks with a mate, one on one, to discuss university prospects, who’s hooking up with who or just wax lyrical about their weekend, without feeling the need to invite a bucketload of friends along.

In my experience, as a Brit, I was surprised to find that – even though Australian men have a reputation for being more ‘Crocodile Dundee’ than ‘Nutcracker Suite’ – this is a stereotype very much past its expiry date. In fact, from what I’ve seen, Australian men are more prone to bromances than my UK compatriots. I find guys in this hemisphere are less worried about older generational hang-ups and have no qualms catching up over a beer or spending the day at the beach just as a pair.

However, just by coining a term to describe a close male bond, bromances could, in fact, have a negative effect on the male population. There isn’t one finite term to describe the close relationship between two women, so why should men be required to name theirs?

When you let your son and his mates pose themselves for year 12 pre-dinner pics. #bromancegoals #loveislove #congaline

The modern heterosexual man is under pressure to conform to a stereotype. To be masculine and tough. Look at the cover of any men’s health and fitness magazine and you’ll see what the ‘ideal man’ should look like. But as soon as he shows any sign of emotion or feeling, he’s immediately told to ‘man up’. It’s a stigma that is being fought against, with the ‘It’s Ok To Talk’, ‘R U Ok?’ and ‘Man Up’ campaigns telling all of us that we are in fact allowed to express ourselves without consequence.

With suicide being the leading cause of death among men in Australia aged 15-44, and often linked to mental health, caused by feeling the pressure to act the ‘right way’ by society, it’s certainly a campaign that requires more and more support. Celebrity friendships such as Matt and Chris’s are, without intending to, helping with this. They’re showing that it’s perfectly fine for guys to hang out on regular occasions, and not just for a quick beer down the RSL once a month.

Speaking to the ‘Man Up’ campaign, Associate Professor Michael Flood says that despite sportsmen hugging each other on the field after they score a try or a goal, when two dudes meet up with each other, they’ll usually restrict themselves to a firm handshake, rather than show any sort of emotion. If a hug does occur, it’s not affectionate, but more of an ‘I’m acknowledging our friendship with a pat on the back, making sure our genitals come nowhere near each other,’ kind of hug.

It’s an attitude that needs to be weaned out. So next time you meet up with your pals, don’t be afraid to embrace them, and if you do happen to ‘touch,’ laugh it off with some bromantic banter.