Drake Savagely Trolls The 76ers With His Big Ring Energy

Drake is no stranger to stir-frying our brain with provocative outfits. Yesterday he upped the ante though at the Toronto Raptors vs. Philadelphia 76ers game, not just rocking a crazy expensive watch, but also trolling one of the 76ers, Joel Embiid, for going scoreless throughout the entire game.

Drake showed off the diamond championship ring all night and then trolled Embiid for going scoreless vs. the Raptors 💀(via @tsn_official) 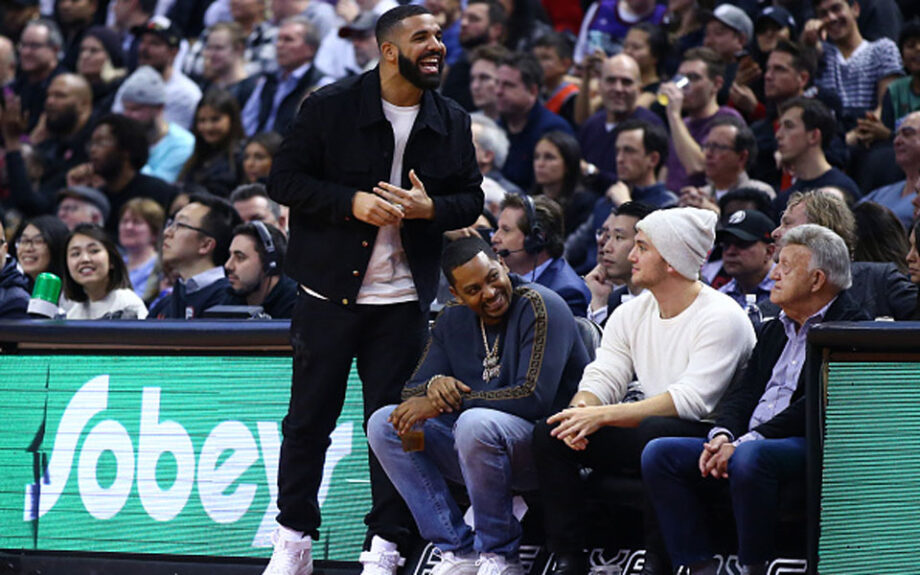 Once courtside, Drake switched the welcomeovo jacket for a black denim one.

The $150,000 ring is one of two the rapper was gifted by the Raptors. The oversized ring is said to be the biggest ever championship ring and contains over 30 carats of diamonds. In other words: all the courtside hollering paid off for the Candian rapper and songwriter.

Whilst Drake isn’t a Toronto Raptors player, he is their official mascot. Which means when they win, he wins – which they did last night, holding out the 76ers 101 to 96.

During the game, a Bleacher Report video appears to show Drake rubbing it in, clapping at the 76ers Joel Embiid, who failed to get his name on the scoreboard.

While it appears to be in good humour, we can’t say we’d be too impressed if we were mocked, even lightheartedly, by a non-player who not only possessed an NBA championship ring but also a Patek Philippe Nautilus Diamond.

This is not the first time Champagne Papi has courted controversy with this wrist candy: he awkwardly wore the same diamond-studded demon to a Hublot event back in August.

As for the judgement: are we being harsh? The 1,343 diamonds encrusted on the watch’s unmistakable face and bracelet suggest not: this bad boy hardly flies under the radar. Not to mention the price: $500,000, to be precise.

Besides the diamonds, the watch (or at least, the one Drake wore in August, which appears to be the same as this one), features a 40mm white gold case alongside a date function. You know, to remind you of the important things, like Raptors games, and flaunting your stuff in front of the opposition.

Just another day in the life of Drake, people.