Kevin Hart made his first major public appearance at the E! People’s Choice Awards on Sunday the 10th 2019, following a horrific car crash in September.

The comedian, known for his sell-out stand-up tours and high-grossing comedy films, picked up an award for Comedy Act of the Year. However, we’ve found ourselves doing anything but laughing at the star’s Patek Philippe Grand Complications timepiece. In fact, we’re straight-faced, brimming with jealousy.

The Grand Complications, which boosts Hart’s style game to a gazillion, features a manual winding mechanism with no less than 496 parts, day, month, leap year and day/night indicators. All of which are wrapped in a rose-gold case, which is water-resistant to 30 metres. And of course, being a Patek, you know it’s been made to the highest quality. Quite simply, it’s a watch aficionado’s aurelian dream.

If you’re lucky enough to find yourself one of these rare timepieces, you can expect to pay around $300,000. 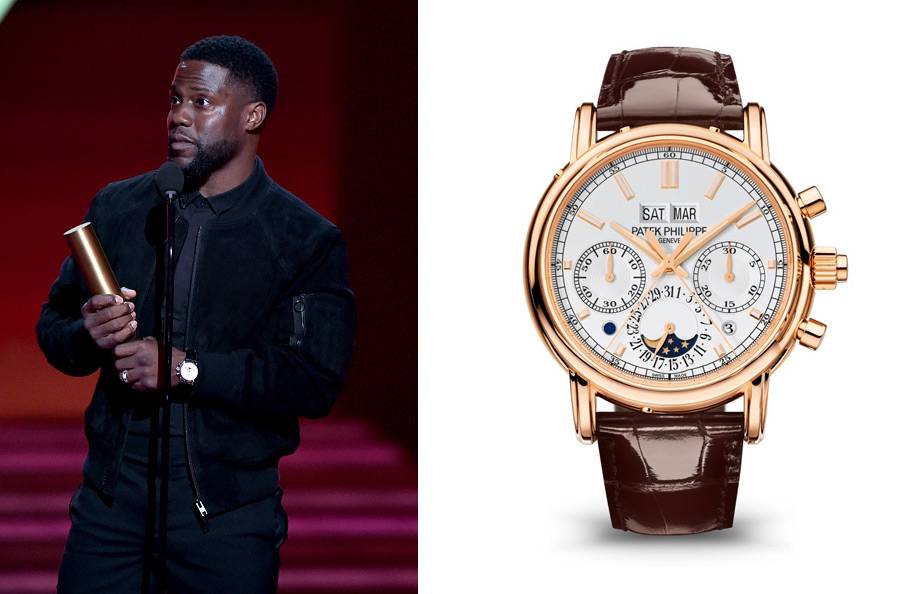 Hart has paired the gorgeous watch with a full black outfit that’s as simple as they come, comprising a custom Frère black suede bomber jacket, black shirt, and black suit pants. The Jumanji star is reaffirming his love of Patek watches after he was seen wearing the same model in July for his 40th birthday.

Kevin opened his acceptance speech at the awards ceremony by thanking God, saying “I definitely don’t have to be here,” referencing the car crash back in September, which saw his vintage Plymouth Barracuda veer off Mulholland Highway, causing the star to undergo spinal surgery.

While his body may be weak, his watch game is still strong.