Business-class used to be a stylish sanctuary. But as wifi (and frequent flyer upgrades) get rolled out, pointy end passengers fear the worst. 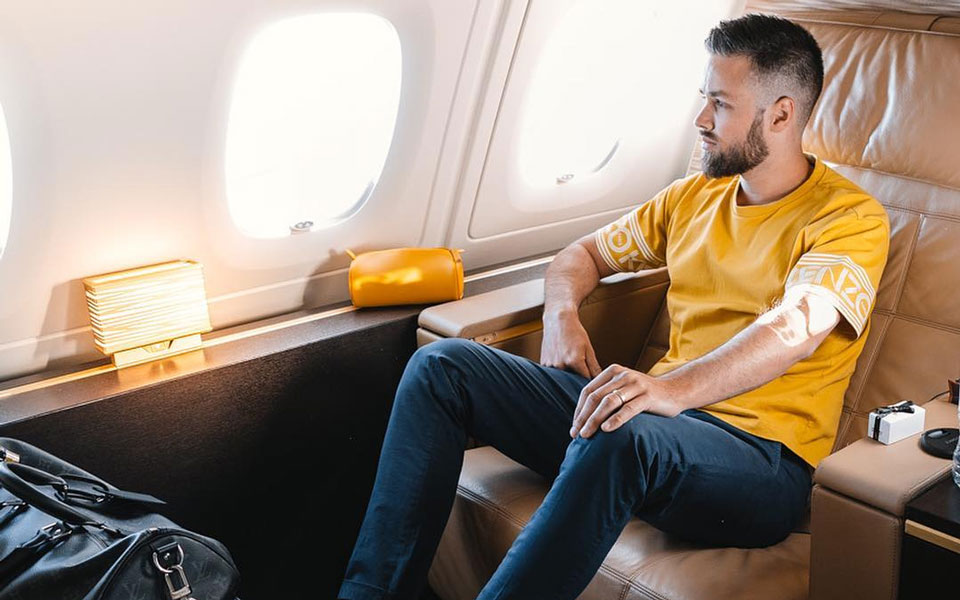 Frequent flyer Immannuel Debeer escapes the business-class controversy and heads up to first...

The maw between rich and poor has never hung so slack as it does in 2019. While many journalists hold up the trite old ‘business-class vs. economy divide’ as a metaphor for this issue, they’re wrong; tourism has never been accessible to the world’s poorest – and air travel is one of the few industries where the cliché “a rising tide lifts all boats” (or at least, the ones that had access to it in the first place) is correct.

For upgrade-seeking passengers, this is great. However, for business-class stalwarts, it signals the breaching of the ‘pointy end cone of trust’ – a safe space where everyone from Australian Financial Review journalists to high flying politicians used to be able to let their hair down in peace, without their penchant for peanuts, pina coladas and open mouth snoring being exposed to the public.

In other words: for tradition-loving passengers, the 90s were the Golden Age of air travel, the noughties were silver and the twenty-tens were bronze – and as 2019 comes to an end, we are now entering a post-privacy era of frequent flyer promotions, influencers and ‘peeping tom’ smartphone users, which – for staunch business class passengers – no amount of ‘ergonomics’ (or private suites) will ever make up for.

RELATED: The Day I Realised The Golden Age Of Business Class Was Over

As Fiona Carruthers, the Travel Editor for the Australian Financial Review wrote in January, business-class should be a sanctuary from modern life: “This is the wonderfully illicit aspect of mid-week pointy-end travel for work: the sense that no one’s watching and you’re not on real time anyway. It’s a mood reminiscent of bunking school.”

“Where else in today’s time-pressed world can you justify watching a two-hour Warren Buffett documentary, followed by the second season of The Handmaid’s Tale in your PJs while feasting on Peking duck and osso bucco with a side of edamame eggplant relish, accompanied by a bloody mary?”

Fiona also made the excellent point that: contrary to popular belief, business class is not so much about the glamour, the networking or even preparing for the world-changing meetings for which you are (presumably) travelling.

No: the true attraction of business class is “the prospect of time-wasting at altitude, and the associated opportunities to indulge in pointless behaviours – such as duty-free shopping for lip gloss in Doha at 2am.”

“Over the years I’ve spotted well-known captains of industry begin a flight perusing the company’s EBITDA data with a suitably furrowed brow only to end up snoozing open-mouthed, shoes and socks discarded, the remnants of pad thai spilt down their front,” Fiona revealed.

“I’ve spied a successful fashion designer sitting cross-legged on her seat like a toddler, stretching her expensive clothes hopelessly out of shape; watched a pair of notable actors giggle and throw peanuts at each other; and wandered past a Labor Party leader snoring loudly.”

“No doubt I’ve done most of that too.”

“Years ago, I took a cheeky iPhone snap of the most famous Australian bank chief executive of the day looking decidedly dishevelled, gazing into space by the water fountain in the lobby of Emirates’ first-class lounge in Dubai,” she added.

“I’d planned to send it to colleagues for a laugh, but quickly deleted it. What sort of person does that in the pointy-end cone of trust, not least given everyone’s state of semi-unravel at various points of the flight?”

Problem is, give it a few years and it’s hard not to imagine this photo ending up all over News.com.au. And it’s not just Instagram pages like passenger shaming that suggest this; there are also numerous forums now being dedicated to the issue of “sociability vs. privacy” in business class, and innumerable reports of bad behaviour by pointy end passengers signifying a major business-class culture shift.

Not only did we have the ‘nutgate‘ incident of 2015, but we’ve also seen stories of pointy end passengers punching flight attendants, stealing whisky and violently breaking wind, all in the last few years. Chuck in the business class invasion by economy passengers when Qantas refurbished its fleet of Boeing 737s (and removed the dividing curtain between business class and economy) and you have a controversial issue of privacy vs. entitlement on your hands.

As one Australian Frequent Flyer put it: “At the end of the day, this is a first-world problem. But when you’re paying $1,072 for a Qantas Business class ticket from Brisbane to Melbourne, it’s not unreasonable to expect some privacy.”

Some were not so kind, expressing their annoyance with comments like, “Perhaps their announcement at the start isn’t enough? I’ve commented before that Virgin Australia with their white rope deters this effectively.”

Still not convinced of the moral decline of business-class? Eliot Advocacy recently reported of a passenger spraying asthma-inducing oils into their seatmate’s space (and of another one attempting to get an allegedly fraudulent upgrade) and RT recently reported on a woman who caused a SWISS flight from Moscow to Zurich to make an unscheduled landing after abusing staff for denying her more Champagne.

An article by Escape.com.au, however, tops the lot, describing how one passenger on an Emirates business-class flight took lie-flat entitlement (and disregard for others) to a whole new level, soliciting a lap dance at 30,000ft.

“The repetitive demands for Champagne and screams about the ‘freezing’ temperature could have been tolerable, but when she dragged another passenger up into row 5 so we could all witness what could only be described as the most drunken blind first date, things got weird,” the unfortunate Escape.com.au journalist wrote.

“They shared headphones and danced in their seats, making sure everyone knew how much she ‘loves this song!’ until she decided to show her date — and all of business class — her moves. And they weren’t like Jagger.”

Of course, it would be narrow-minded to assume all this behaviour comes from upgraded passengers. In fact, many of the worst examples of premium-cabin behaviour come from those who have paid for their own ticket (or those who simply have no idea about photo etiquette).

That in mind, we are forced to consider that it may be technology and the associated reduction in social shame that has punctured the business class ‘cone of trust’ (and peace and quiet). And the snobbish behaviour of some passengers, ironically enough, may worsen this problem. Instead, the best way to fix it, we reckon, is to welcome The Newly Upgraded and re-engender the pointy end spirit.

So yes: although business class passengers (including us) are right to furiously complain about the decline in standards over the years, the solution is to rebuilt the ‘cone of trust’ to be larger, not to try and keep people out.

Or, you know, just make the leap to first-class…

The golden age of aviation is now. Do you agree? Just experienced yet another @singaporeair 5 star flight onboard the A380 to Zurich 🇨🇭in the brand new first class suites, this time in a double bed 🙈