Picture this. The thermometer’s bubbling and your annual pilgrimage to the beach is in full swing. Tanned, glistening bodies are strewn across the sand, reclined like Greek demi-gods; sporting six-packs, massive quads and glutes bigger than your head. And then you take off your pants.

It’s not Kim Kardashian, it’s a beached whale in Speedos.

Rather than avoid this gelatinous reckoning, this year I thought I would do something about it. And where better to start than Cristiano Ronaldo’s gym routine – a workout that hits your thighs and stomach like Schwarzenegger’s hits your arms and chest.

For those not in the know, the three-time Ballon d’Or winner is arguably the best player of his generation, and unlike others who achieved such status through pure skill (think: Messi), Ronaldo’s success is broadly recognised as a result of an explosive body transformation that saw him go from skinny Portuguese winger to acclaimed international superstar.

Whilst my ambitions, as a skinny fat man, were comparatively modest (go to the beach without my jiggling corps attracting undue attention), once I read about CR7’s work of mass caloric destruction online, I had to try it. Unsurprisingly, given that I am the epitome of skinny fat (a guy who sits in an office all week and then does all his exercise at the weekend), it was rather brutal.

Here’s how it went down.

We begin with bodyweight squats, which may be a light intro for someone like Ronaldo, but for someone with the hip and ankle flexion of a rusted gate, it’s challenging. I complete two sets of ten, fall on my arse twice, and finish with the awful sense that my mother’s pilates group could have managed easier.

I then repeat this 2×10 formula with reverse lunges, single-leg glute bridges, drop squats, side-lying leg raises, walking lunges and jump squats, with a 45-second rest (and a hefty drink from my gym’s bubbler) between exercises. After falling on my culo with the bodyweight squats this segment actually gets easier and I end up getting through it with a sense of hope that I may be able to survive after all.

Side-lying leg raises? Check. Oh, hang on. They were easy at the beginning but by the time I reach the end of each set my leg suddenly feels like a (heavy) piece of gold-standard Iberico. But hey:  Chris Hemsworth glutes don’t come cheap.  I then move on to walking lunges (not too bad), jump squats (tiring), cross-back lunges (required Googling to see what the hell they were), calf raises (at least I’m now prepared for the soft sand), leg extensions and hamstring curls. 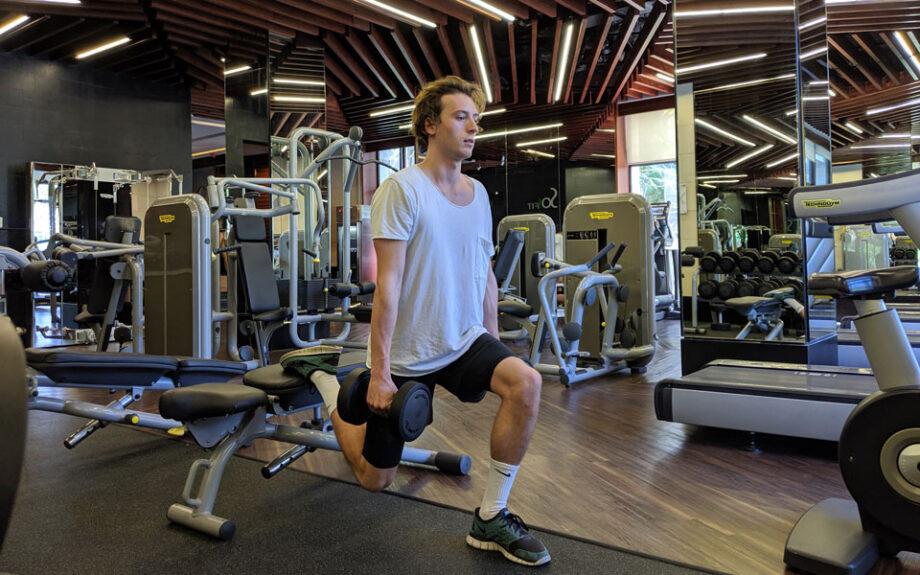 How hard can a single leg squat with the support of a bench be? Really bloody hard. Especially when you’ve just done a week’s worth of exercise in half an hour. I find myself collapsing to the right, then the left, then shakily making my way up and down. It’s official: Bulgarian squats are my nemesis.

I also chuck in a few medicine ball ab  builders which I’ve seen Ronaldo do on Instagram, just for good measure.

Light exercise (e.g. a jog on the treadmill), followed by stretching. This I can handle – they don’t call me bench warmer for nothing. I also don’t have access to Ronaldo’s ice bath, but I make do with a swim in the (still somewhat chilly) Sydney waters.

In the end I coped reasonably well with this workout as, despite my sedentary summer lifestyle, I play soccer in the winter, and have (some) residual strength in my legs. That said, I was damn sore the next day, as I imagine anyone not used to doing this kind of routine on the regular would be.

I also feel like if I kept it up, I would eventually get a more defined stomach. Here’s hoping. Oh and if you’ve ever had any kind of knee injury and want to prevent it from happening again, this workout is a godsend, working your glutes, hamstrings, quads and calves with a combination of compound and targeted exercises.