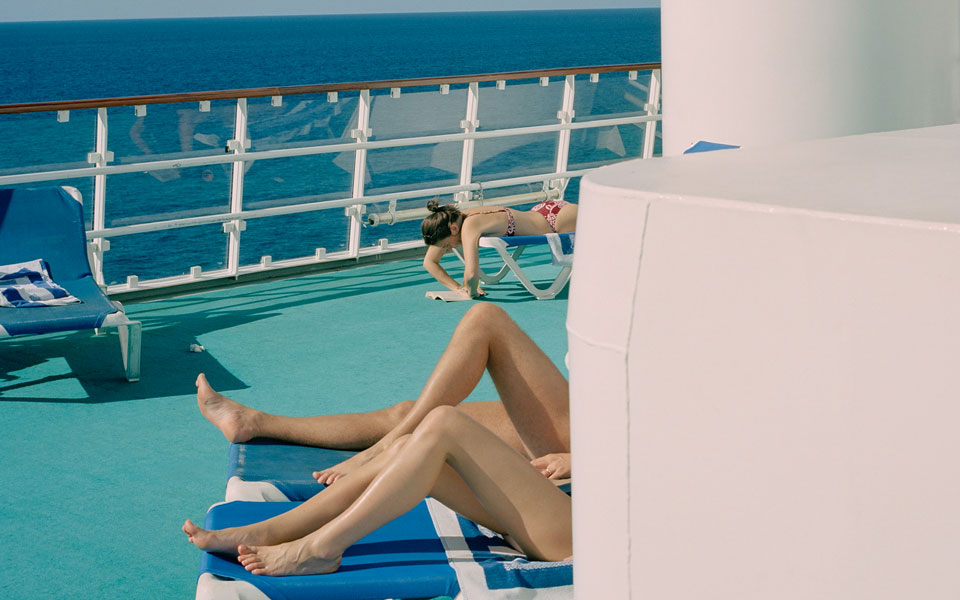 There’s a reason cruise ships are associated with sex. Free-flowing tipples. Sun-kissed bods. Friends you’ll never see again. So don’t ask why people feel the need to make the ‘wild’ most of their holiday tan but how. The real query is why your grandparents are so embezzled by The Cruise Sensation, but we’ll leave that for another day.

Today is about the wildest things seen at sea, revealed by industry insiders who have done their time and no longer wish to keep their secrets to themselves. That’s right; the craziest stories any aspiring cruiser (or nostalgic boozer) needs to know.

As reported in October by Express, many cruise ships possess a “hidden area” where staff indulge in parties “wilder than Vegas.” And guests have no idea.

This comes from an American man, Brian David Bruns, a former cruise ship crew member and author of the Cruise Confidential book series. Teasing digital news outlet Express about the wilder parts of the ship guests couldn’t access (presumably in a bid to sell his book), Brian went on to spill some info.

“Crew bars vary widely, depending upon the layout of the ship and where they’re located… In the case of one Royal Caribbean ship, the entire back deck near the waterline was open to the air… just off the extensive dining area for the crew was an expansive, teak-planked open-air patio spanning the entire width of the ship.”

“Most crew bars have minimal dance floor space, however. They aren’t nightclubs, so much as a neighbourhood dive,” he added. “They’re loaded with chrome and shiny baubles, with thumping music.”

Another contributing factor to the wild behaviour is the crew’s ease of access to alcohol: “Crew have access to cheap liquor in other ways, too… We can enjoy duty-free stuff from port, for example. Passengers have to wait until they get home to open such goodies. But for the crew the ship is home.”

However, despite the hair raising headlines, when you think about it, it’s only natural this ‘live by the sword, die by daquiri’ mindset should develop. As Anthony Bourdain once pointed out, put a bunch of people in a pressure cooker together, and they will become unnervingly close.

“Professional cooks belong to a secret society whose ancient rituals derive from the principles of stoicism in the face of humiliation, injury, fatigue, and the threat of illness… The members of a tight, well-greased kitchen staff are a lot like a submarine crew,” he wrote for The New Yorker.

“Confined for most of their waking hours in hot, airless spaces, and ruled by despotic leaders, they often acquire the characteristics of the poor saps who were press-ganged into the royal navies of Napoleonic times – superstition, a contempt for outsiders, and a loyalty to no flag but their own.”

A Reddit thread entitled, “Cruise ship crews of reddit, what’s it really like to work and live on a cruise ship??” suggests yes, with the top voted comment being, “Every night is a Friday night and every morning is a Monday morning. Every day is ground hogs day.”

Reddit user ‘MirtaGev’ added: “Everyone sleeps with everyone,” while JMPBass elaborated, writing, “Remember high school, where everyone knew everything about everyone’s business? Who was macking whom, cheating on so-and-so, doing this-and-that, being a such-and-such? Well, that’s ship life in a nutshell.”

Another user summed it up exquisitely, explaining how cruise ship life makes Sartre’s ‘No Exit‘ look like a cakewalk: “You will never be alone. Relationships happen really fast.Your bodyclock changes. Grudges can fester. Everyone higher rank than you is an idiot. If you have a solo room then you might as well write a blank booty cheque.”

Another user agreed, writing: “You [will] burn your self out and collapse in a heap…. I worked 10 hours per day every day for 4 months but the social life was enough to keep you going.”

“My first trip was largely uneventful however as I spent my time focused on work as I wanted to make a good impression but in my last month… I went from [a] shy 20-year-old to an absolute w*****.”

“I’m not bad looking either so that helped me a bit.”

“The travelling was fantastic,” he continued, “and I travelled the world. My favourite part being the very north of Norway where in the summer the sun didn’t set and there was sunlight all day long.”

“Alcohol (including spirits with my company) was very cheap and you would often find your self buying drinks for an entire room of people for very little cost.”

However, “it’s a hard lifestyle to maintain,” he concludes, “and sleep is limited if you’re social and want to go ashore at the same time.”

“But in my opinion, totally worth it. For a few years in any case.”

Oh, and one final aside – it’s not just staff. As respondents revealed in a poll conducted by cruise company Royal Caribbean, cruise-goers are just as apt to indulge, with 99% of the 1,000 people surveyed saying sex was their favourite cruise activity, 62% saying they had better sex at sea, and 52% saying they were more likely to have sex on a cruise ship than on land.

One user’s comment in the Reddit community r/cruise supports this thesis, with the user admitting: “We have had sex on the balcony of our cabin, during the day and at night, at sea, and at ports. Anybody could see us if they really looked.”

“Now, where did we have sex outside of the cabin? The theaters when there are no-shows, certain lounges, family bathrooms (can be found in the hallways where the cabins are), and our personal favorite, these egg-shaped bed/chair things at the very front of the ship.”

“Nobody ever goes out this far, and if you push the furniture closer to the glass, nobody will walk in front of it,” the frequent cruise goer finished.

As for us: we’re exhausted just reading about it. But hey, as the saying goes: “when at sea.”