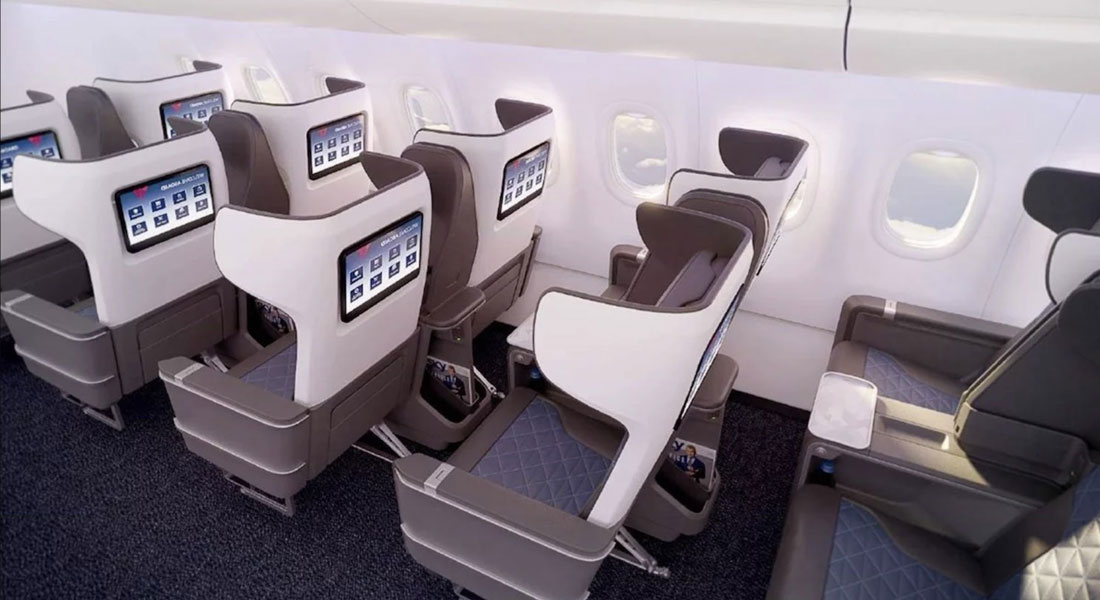 Delta is set to introduce a first-class seat that is lightweight, comfortable and classy. The only problem? Its space-saving design is reflective of a changing premium cabin industry, in which first-class is rarer and rarer (and when new first-class products are introduced, they look more and more like business-class).

While over in the states (domestically) there is no such thing as business-class (it’s just first and economy), Delta’s new (domestic) first-class signals a change in attitude we are seeing more and more internationally too.

Anyway, as PAXEX.AERO reported on Monday, the changes will be introduced as Delta brings Airbus A321neos into its fleet (it’s still unclear whether older jets will be retrofitted with this new design).

A swanky new first class seat will be flying soon on some @Delta flights. What do you think of the design (produced in partnership with @recaro_as and @FactorydesignUK)?? https://t.co/qnM2gcBl9o#PaxEx #A321neo $DAL pic.twitter.com/vN0pbZ2MxC

PAXEX.AERO said the seats were designed based on passenger feedback, in partnership with the aviation design firms Factory Design and Recaro, and will boast “better privacy, more space and other benefits.”

These benefits include increased privacy, a larger tray table (including 25% more workspace), an increase in storage, a power port that faces the customer and memory foam cushioning.

“Also key to the A321neo seats will be the in-house Delta Flight Products inflight entertainment system,” PAXEX.AERO reported. “The embedded in-seat screens are fed by a wireless data connection rather than cabling, helping to reduce aircraft weight and ease some installation and certification complexities.”

This plays into a broader trend of first-class becoming less about jaw-dropping luxury and more about maximising space. As The Economist puts it: “Executives are flying business class; plutocrats are taking private jets.” So airlines need to either get rid of their first-class offerings, or streamline them.

“Many analysts predict that first class will soon disappear. In America it is already almost extinct…Ten or so years ago almost all the many hundreds of long-haul aircraft based there offered first-class seating; now only about 20 do,” (The Economist).