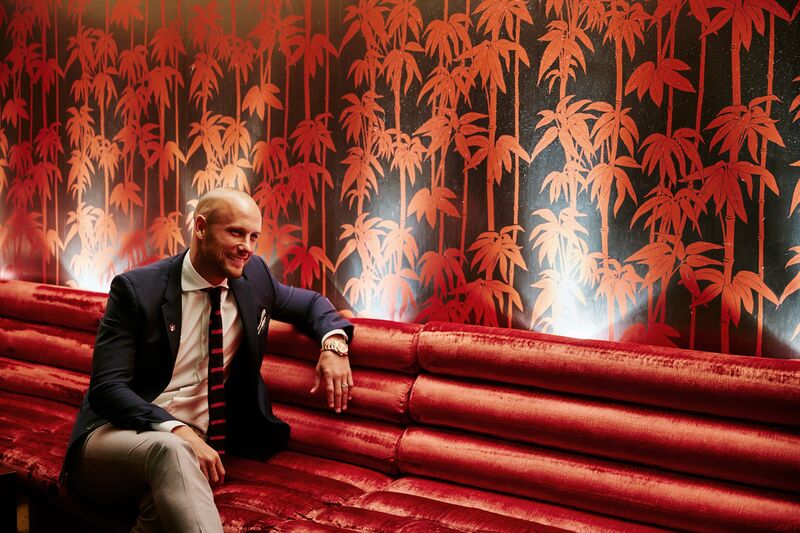 It started with an idea for a nightclub at the age of twenty five. A decade on that dream has evolved into Eve Bar, one of Melbourne’s most recognised nightspots for celebrities and the city’s fashionable partygoers. It may sound like a familiar Kings Cross identity, but that’s where the similarities end. Nick Russian is a father, a husband and a family man who knows how to grind his teeth in the hospitality scene whilst looking damn good. Rachelle Unreich sits down to chat style, work ethic and how to throw the city’s coolest parties.

NR: It’s a tough question: as a man, I don’t get into those conversations with mates. Maybe it’s a little bit Italian – at the moment I really like that whole Italian Pitti look when it comes to suiting. I like what David Beckham wears – he’s always on point. But geez, I don’t know. I don’t sit down and assess my day to day style; I don’t know if it’s a really masculine thing to do! If I like it, I wear it.

RU: Does your wife Rozalia [Russian, with her massive fashion following on Instagram] get a say?

NR: Often the stuff I wear, she hates. She’ll say, ‘Get that off!’ Sometimes if you’re wearing something new, you will turn to the wife and say, ‘Is this all right?’ and hopefully she says yes. If she says no, I wear it anyway. Usually she thinks what I wear is okay.

“Dad came to Australia when he was little and grew up in housing commissions, so it’s always been a part of me – the harder you work, the luckier you get.”

RU: Label-wise, do you have a favourite?

NR: I reckon when it comes to shoes, you need to spend a few more dollars, so I’ll wear, maybe, Gucci shoes. When it comes to everything else, I think you can get some great clothing at a relatively decent price. I’ve got items that are expensive as well as super cheap. At places like Topshop you can get a great suit jacket for a reasonable price, but I’ve got one from Dolce & Gabbana too. I don’t go into a shop just because it’s expensive.

RU: Who do you think was your style influence?

NR: My mum and dad have always dressed really well. Growing up as a kid, mum and dad instilled some personal pride into my brother and [me]. Mum was a stay at home mum, and dad used to have his own different businesses that he was involved in that would vary over the years.

NR: Very similar. My brother and I are always looking at different opportunities; it’s our personalities. We’ve always worked in the hospitality business. We share an office. We were talking about it today – there are so many opportunities that get put in front of you, and you’ll look at one and think you’d do something differently or better.

So when you look at something and think you could do it better, you try to do it [yourself]. We like to think most times we come through with a successful plan, but sometimes we don’t, and sometimes we have a great idea but end up running short of time.

RU: Do you have a career high?

NR: I don’t really get proud of something that’s work related. Once something’s set up, you’re busy looking at your next move. The thing [I’m] most proud of is being a father, but when it comes to work, we’ve been pretty proud of the achievements we’ve had with our nightclub, Eve Bar. It’s been a great success over the last decade. I was 25 when I came up with the concept of what it was, and now that I’m 36, [my brother and I] are pretty proud of that.

“Kanye was actually rather quiet and introverted when we spoke to him.”

RU: What are your nightclub clothes?

NR: They always consist of an old pair of shoes because of that many drinks that get spilled over the top of them, and about 20-30 different jackets, on rotation.

RU: You’ve hosted many a celebrity at Eve over the years. Most memorable encounter?

NR: We’ve been lucky; there have been a lot of celebrities who have passed through. Probably Kanye West and Britney Spears. Kanye was actually rather quiet and introverted when we spoke to him. This was going back to our first year when we were opening the bar, and he was just on the verge of becoming enormous, so he was quiet but very polite. Britney Spears was the same.

RU: Is social media a part of your life with Rosa’s success?

NR: Rosa’s done really well with her Instagram. For me, it’s not on a day to day basis. I don’t really think about it; I just go with the flow. I don’t take any of it too seriously, to be honest. I usually spend more time on social media when I’m away on holidays, and you think that’s a cool photo, and you share it with your friends.

RU: Do you have a good balance between work and play?

NR: It’s not really that easy, that’s probably my biggest problem. I must drive Rosa insane in terms of turning off. On holidays, I’m constantly checking my emails. But when we do go away, I try to do all my emails first thing in the morning, and try to turn my phone off or put it on silent for the greater party of the day. I do try to spend as much quality time as I can when I go away with Rosa and my daughter. My biggest issue is switching off.

RU: Where is your favourite place to go away?

NR: I love Italy. My family’s Italian, and I just love it. I love the culture, the food, the scenery, the fashion. I always feel at home there. I love the North. My two favourite places are Milan, where I lived back when I was 21 and modelling over there, and I always love Lake Como as well, which is more of a relaxed environment. The place itself is just spectacular.

RU: Do you have anything you’re passionate about doing? Hobbies?

NR: All I do is actually work at the moment. I work six days a week, and on my day off, nine times out of ten, I’ll spend it with my family, and friends. Previously, I loved sport. I love football and going to the gym and everything else, but I don’t really have a great deal of time to pursue much of a hobby these days.

RU: And you’re obviously close with your brother…

NR: Yeah, we’re only two years apart. We did everything together – played footy together, went through school, and we’ve worked together forever. Growing up as kids, we’d punch each other around the house as young brothers do, but we were always super close as kids and still are today. We’re very similar personality-wise, but we have our own strengths in certain areas.

RU: What’s a motto that inspired you?

NR: My dad [always focused on] loyalty, family and to work harder than anyone else. Dad’s always said, ‘No one’s going to throw a bag of gold over your fence, so you’ve got to go out and make it yourself.’ Dad came to Australia when he was little and grew up in housing commissions, so it’s always been a part of me – the harder you work, the luckier you get.

NR: I don’t have an answer for that. One of my strengths is that I can talk to anybody, whatever their background is, whether they’re the Lord Mayor or a garbo. I’ve got a good broad knowledge across many subjects. I can get a conversation going.

RU: Are you a romantic?

NR: I’m not the slightest bit romantic. I’m terrible at presents, I’m shocking. The worst thing I’ve ever given was when I was five and I gave my brother the Christmas present from the year before.

NR: I like biographies, true stories. I liked the book about Kerry Packer, The Rise and Rise of Kerry Packer.

RU: I can hear your brother in the background. How does he describe you?

Brother: A pain in the ass! I’m him, but taller.

RU: Do you have any hidden talents?

NR: Growing up, I was pretty successful with my sporting career; I played elite football and also did boxing. But I don’t want you to publish that Nick is good at this, this and this! These days, the thing that people don’t know about me is that I’m actually rather a good cook. I taught Rosa how to cook. I taught her all the old recipes from my Nonna on my father’s side, who had restaurants in Italy.