How Technology Will Change Your Next Tattoo, According To The Experts 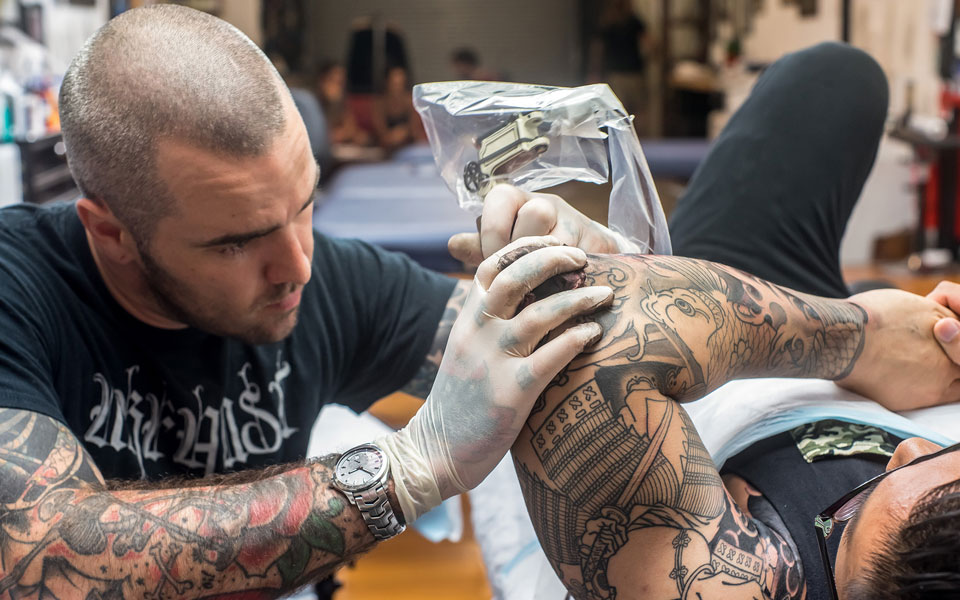 The art of tattooing can be traced back to 3017 BC, although the actual term tattoo didn’t find its way into everyday vocabulary until the 18th century. Since then, tattooing practices have changed, from puncturing the skin using a mallet and a piercing implement, to the electric guns found in parlours around the world today.

The popularity of tattoos increases year after year. A 2016 US poll found that 29 percent of American people had a tattoo, an eight percent rise on the year before, while around 14.5 percent of Australians have some form of ink on their body. Take a walk down your local high street and you’re highly likely to spot body art in every direction, from mandalas, flowers and tribal designs to full sleeves depicting a wide range of images.

With tattoos becoming more popular than ever, customers are wanting new and unique ways to stand out from the congested pack. The artists, therefore, need to change not only their equipment but the associated tools they use too. We’ve spoken to a few Sydney-based artists to find out how they’ve noticed technologies change in their careers, how they assist them and what they believe the future holds for tattoos.

John Balestri works at Ink Arcade in Cronulla and his been tattooing for the past 10 years. In that time he’s seen various technologies come and go, with only the ones that aid both himself and other artists remain. When you enter a parlour today, there’s a very good chance your artist will have ideas sketched out on an iPad, but iPads haven’t been around forever.

John begins by telling us how things used to be way back when: “When I first started tattooing 10 years ago it was all lightboxes, tracing paper, scanning, and printing”

“Then, we started using Photoshop to pull our ideas together. Now, we are using iPads with the Apple Pencil and a bunch of apps to aid us. Apps that are popular amongst tattoo artists are Procreate and Adobe Draw.”

Maxime Etienne, an artist relatively new to the tattoo scene, having only been inking people for around three years, but now with his own studio in Bondi, echoes John’s statements. He tells us, “using an iPad makes it much easier to make changes to a client’s design. Before the iPad, we would have the sketch our ideas on paper, and if the client didn’t like it, we’d have to start from scratch.”

Both artists use apps such as Procreate – which has become the go-to choice for many artists – to sketch out their ideas. John adds, “Procreate gives us a tool to alter a design, resize and even virtually place the tattoo idea on the client before we start.”

“This helps us as the artist to plan what we are doing. It also helps the client to see their ideas come to life using augmented reality…but also gives them peace of mind.”

Augmented reality is one such technology that has enormous potential to change the tattoo industry. As John says, it allows artists to show the client how their design will look on their body before a drop of ink has touched it – handy, when a tattoo is likely going to be on your body for life.

It’s not just the apps that allow the designs to come to life that has affected the way artists work, but the ones that allow them to show off their creations to the world. Max says, “I wouldn’t be where I am without Instagram.”

The French-born artist has forged a career thanks to the ever-popular photo-sharing app, using it as a platform to illustrate the kind of designs he creates. He says that “before Instagram, you would usually walk into your local shop, go through their flash designs and go with it.”

“Instagram allows people to search for an artist that tattoos in a style they truly want, rather than whatever their local studio provides.”

It’s not just potential clients that Max uses Instagram to reach out to, but he uses it as a way to meet other artists from around the world, as well as find inspiration from them that he can put into his work. When we went to catch up him, Max had Auckland-based artist Tritoan Ly in his studio – the two have become close friends thanks to Instagram.

For Max, it’s also the tools he uses to get the ink onto the body that he has seen change in his career. He tells us there are two types of tattoo gun, coil or rotary. Coil guns give out the fear-inducing sound you’ve no doubt all heard, rotary machines are much quieter, Max uses the latter.

“With the gun I use, I can easily swap out cartridges to give me different types of needle. Before, if you wanted different sizes, you’d have to have separate machines.” He adds that tattooing doesn’t have to be consigned to a dedicated studio anymore, either. “I can attach a battery pack to my gun, and take a portable Bluetooth stencil machine out onto the street and tattoo people on the go.”

Technology then clearly has the power to change the entire process of tattooing. From the design stage all the way through to the inevitable social media post, its uses are even more in-depth than even this writer assumed. With regards to the future? John summarises,

“As a tattooist we get commissioned by clients to create a work of art that will be on them forever. Any tech that can help us to improve this process is always welcome.”