Not a bad way to make amends.

If there’s one thing that sets the sporting world alight, it’s rivalries. Whether it be between teams, players or managers, fans love to worship their own and despise the ground their rivals walk on.

What you wouldn’t expect though, is for one of the biggest names in sport to wear clothing associated with a rival team. But that’s exactly what LeBron James has done. Turning up at the Staples Center in Los Angeles, California on Sunday 23rd February 2020 for his game against the Boston Celtics, the man widely regarded as the best player to ever grace the NBA was spotted wearing a New York Yankees snapback cap.

The image, posted to the Lakers’ official Instagram page, received a great deal of criticism from fans, with the top-rated comment saying “Take that hat off and we good”, while others add “Take that hat off wtf?” and “Take off that hat! Cmon King!”. While New York and Los Angeles aren’t officially recognised as sworn enemies in the NBA, the East and West coasts haven’t always seen eye-to-eye. Some users claim he chose his hat because New York and Boston are rivals, and with his team playing the Boston Celtics, it’s a natural choice.

Headwear faux-pas aside, LeBron successfully rescues his outfit with a standout Richard Mille on his wrist. The Swiss watch brand is known for producing highly technical timepieces, with many of its models inspired by Formula 1 and the state-of-the-art technologies and materials. LeBron’s model is the RM 011 Felipe Massa, but we believe he’s swapped the strap for a smoother yellow version. Before the strap change, James would have forked out A$250,000 for the watch, but the new strap could have cost somewhere in the region of A$1,000. 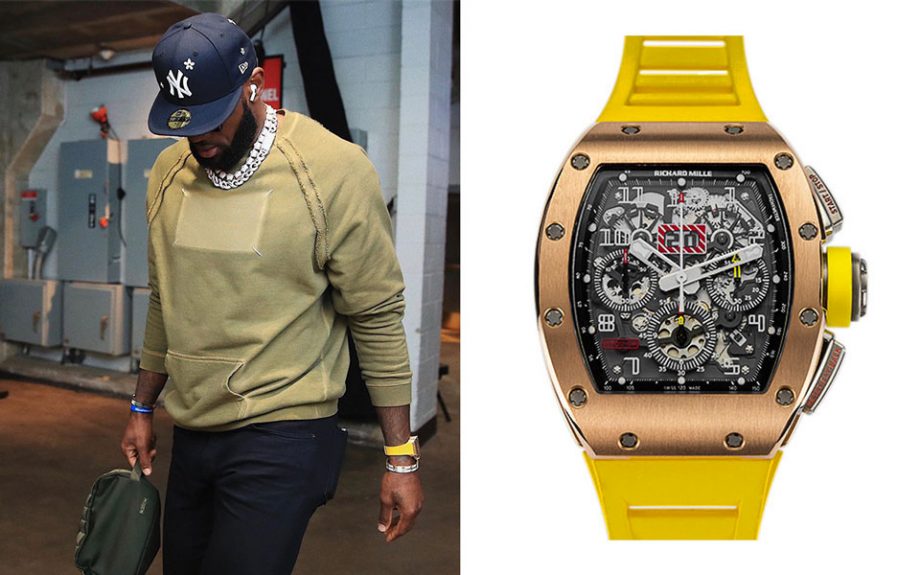 He’s spared no expense on the rest of his outfit either, pairing a khaki Maison Margiela sweatshirt – we can’t find LeBron’s online but this similar black sweatshirt can be had for US$790 – with black jeans, Nike Air Force 1 “Shibuya” sneakers – which last fetched $600 on StockX – Louis Vuitton sunglasses, and a $65,000 18K white gold, diamond-encrusted Cartier Love bracelet.

Overall, we think this is one of LeBron’s best fits in a long time. The NBA all-star is frequently seen flaunting a range of designer brands when attending games, but this latest is a prime example of casual cool.