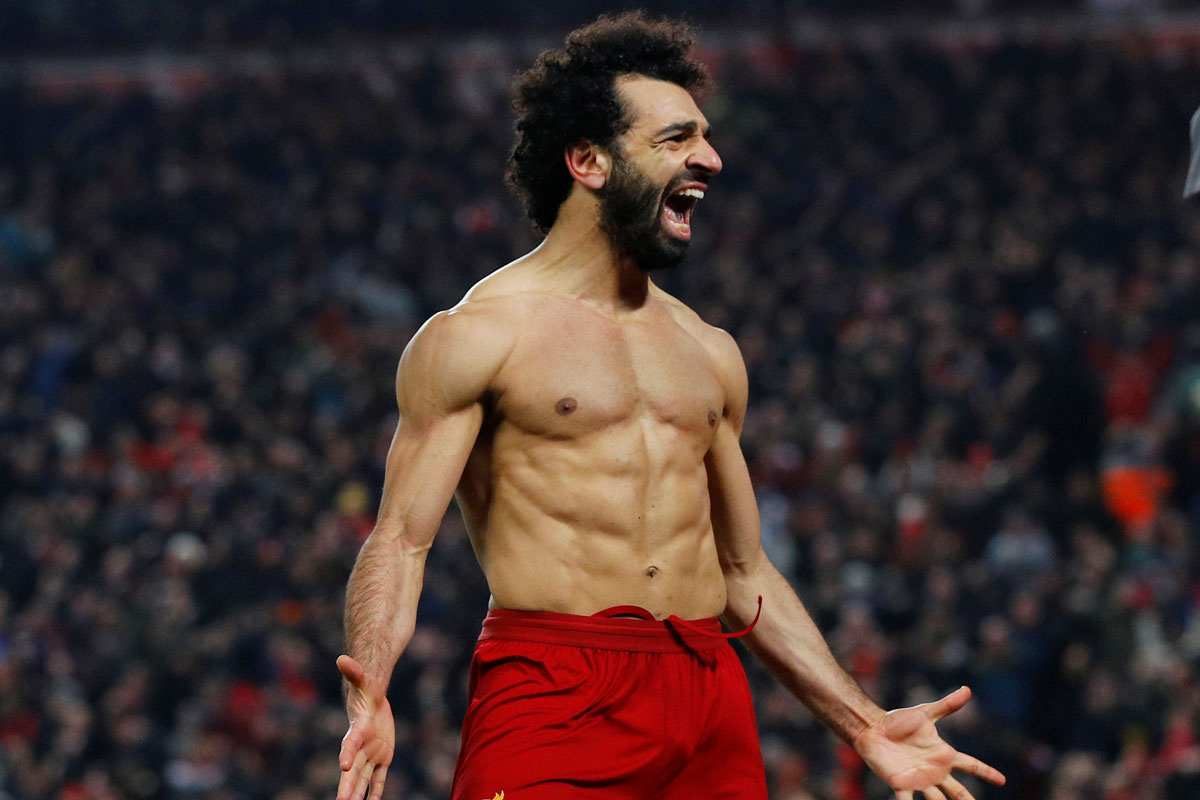 When we look at ourselves in the mirror and see a less-than-ideal figure staring back at us, we will most likely think, “How am I ever going to change this?”. After all, to get a seriously ripped torso, it can take not months, but years of hard work and dedication to training and eating the right foods.

But each year passes quicker than the last, so if you’re not careful you could miss your chance to build a god-like body. Which would be a shame because – as Liverpool star striker Mohamed Salah has proved – being skinny doesn’t have to be permanent.

The Egyptian forward joined Chelsea Football Club in 2014, with a rather delicate frame. He was physically fit, of course, but compared to the likes of Cristiano Ronaldo – who is eight years Salah’s senior – his body wasn’t necessarily one that we’d all aspire to.

Fast forward to 2020 and, along with the transformation of Liverpool FC – who are now a staggering 22 points clear at the top of the EPL table – Salah has become a modern-day Egyptian God, with a body to match. Six years may seem like a daunting amount of time to commit to training – and yes, Salah has the luxury of being able to train in world-class facilities, with trainers at his beck and call – but if you follow a training regime, then you too can earn yourself washboard abs.

But what exactly would that training regime include? We spoke to Dean Jamieson, owner of Lean Performance Gym in Taren Point, Sydney, to find out what sort of workouts the Champions League Winner has undergone to achieve such a transformation, beyond getting a wax and flexing…

Here’s what the personal trainer and strength coach had to say: “Mo looks as though he has not only tidied up his nutrition protocols but also implemented a strength training program as the gain in muscle mass is very visible in this photo.”

How can the average guy do this? Dean says: “to gain muscle mass like Mo you the best thing to do is implement compound lifts to your training program: for example squats, bench press, deadlift, pull ups, over head press, sled work and carries.”

DMARGE then spoke to change expert and founder of the Ultimate You Change Centres, Andy Anderson, who confirmed Dean’s analysis: “Based on the pictures, and shaving and flexing aside (he is clearly flexing and tensing in the ‘after’ pic), I would say that he’s definitely increased his lean muscle mass.”

“Purely speculatively, I would say that he would definitely have increased his calories from both carbs and protein and changed up his weights routine,” Andy continued. “As a professional soccer player, strength work and weights would definitely have been part of his training program all along, but I would say he’s increased the volume of his weights.”

“His shoulders are more defined, most likely from lateral shoulder raises, he’s definitely done some more ab work and it looks like he’s added heavier bench press to work his chest.”

Andy then told us, “With his body type – ectomorph – he looks naturally lean, so he’d respond to this really quickly in terms of both building muscle and dropping some fat which would help him look more defined. As a soccer player who is undoubtedly burning off a huge amount of calories every day, he would have had to increase his calories from both protein and carbs to build that additional lean muscle mass.”

As for how to do it yourself, and get in tip top shape, Andy advised us to keep your expectations (and a reasonable timeframe) in check: “with any body transformation or program, to get that lean and be that defined and toned – you are going to have to have a reasonable timeframe in place – 6 – 12 weeks” as well as to train “at least once a day, 5 – 6 days a week” and to be “pretty strict with your nutrition.”

“There’s a big difference between putting together a program for a guy who’s naturally skinny and one that might need to lose 20kg, or someone in between rocking a bit of a ‘dad bod.'”

But for a more generalised program to build muscle and lean down, Andy advises “fasting cardio in the mornings – either steady state or sprints or a mix of both – and then weight training or a functional circuit session in the afternoons.”

In terms of exercises, Andy says “if you’re looking for bang for your buck time wise, compound movements like deadlifts and squats are great as they work multiple muscle groups.” Also: “you’d definitely want to be doing bench press for chest and lateral shoulder raises for those defined shoulders and ab work like cable crunches or hanging leg raises,” he says.

“Hitting up a functional-style weighted class or boot camp is great too – one that features rope slams, kettlebells, sled pushes etc.”

Got all that? A new rig awaits.