Think smartwatches and fitness trackers and you’ll likely think Apple or Fitbit. Both companies effectively rule the fitness wearable market, although Garmin certainly gives Fitbit a run for its money. Apple is pretty much in a league of its own.

But that hasn’t stopped plenty of other brands from hitting the scene to offer products that can assist you with your workouts, helping you stick to or achieve fitness goals, or act as a smartphone on your wrist, notifying you of phone calls or allowing you to change the music you’re listening to, to name but a few features

Suunto is one such company that wants to disrupt the smartwatch and fitness tracking space, although it’s hardly what you would call a startup. In fact, the company has been around since 1936, but with smartphones and smartwatches nowhere near being conceived at that time, Suunto started life producing compasses for explorers. While compasses still feature in the company’s repertoire today, it has got with the times and been producing fitness trackers and smartwatches in various forms for a number of years.

The latest product, the Suunto 7, is the company’s first to run on Google’s Wear OS, the smartwatch-dedicated operating system designed to rival Apple’s WatchOS. It was announced at CES 2020 in January and is the first Wear OS watch to make clever use of the co-processor found on the main Qualcomm 3100 processor. If you understand how the internals of gadgets work, that’s exciting news.

I’m not an outdoor runner and I don’t own a bike, so the next best way I could put Suunto’s watch through its paces, was to wear it to a one hour strength and conditioning class at my regular gym. The class is designed to build muscle, before putting the body through a 20-30 minute intense cardio workout. It’s safe to say the watch came away in much better condition than myself.

As soon as I opened the box I was pleasantly surprised with the 7’s looks. Hailing from Finland, it’s perhaps no surprise that Suunto has employed a very minimalistic look. Some other smartwatches and fitness trackers on the market can look way too technical, or not like a watch at all.

…But It’s Not All Good News

Despite arriving in a fetching colour scheme of granite and rose gold, there’s no denying that the Suunto 7 is huge. Suunto hasn’t published the official size of it anywhere but armed with a tape measure, I made it out to be 48mm, putting it on par with a Breitling Bentley and a far cry from the 38mm Hamilton Khaki Field I wear on a daily basis.

It’s not uncomfortable on my wrist – thanks to a lightweight build and an *incredibly* comfortable silicone strap – and Suunto has likely made the design choice to fit the screen in. There is a rather large black bezel around the edge that seems somewhat unnecessary, and if this were to be removed, I feel the 7 would have a far greater appeal. I can’t imagine those with smaller wrists than mine would be happy wearing it. 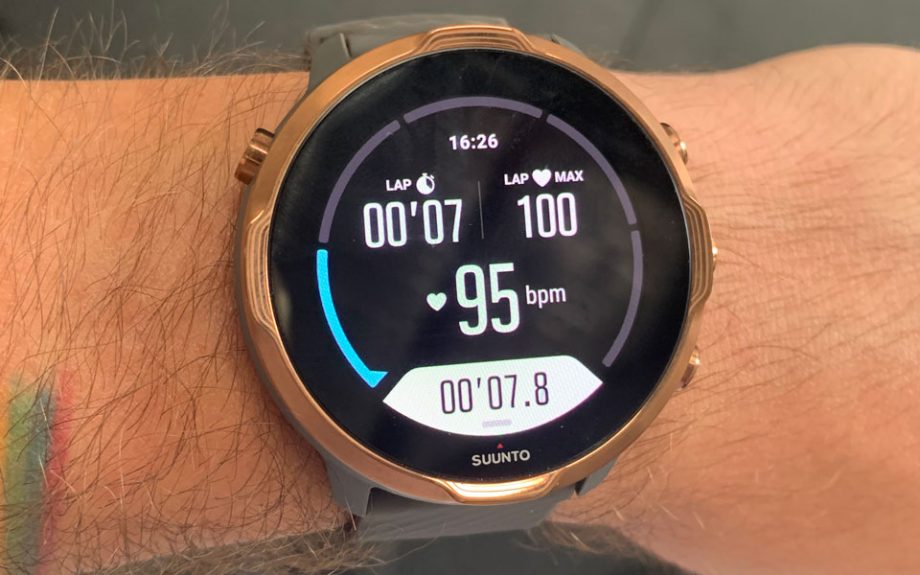 As for the screen itself, I have no complaints. It’s a gorgeous 1.39-inch OLED display, meaning blacks are black and whites are white. Being able to see the screen when exercising outdoors is crucial and with the screen provided, you can see your data clearly. There’s an option to have the display on all the time, although this will eat into the battery life. Otherwise, the screen can be flicked into life when you raise your wrist, or by pressing any of the external crown buttons.

Four Is One Too Many

Speaking of external crown buttons, the Suunto 7 has four of them. Yes, four. In the regular watch world, this is a lot and the same has to be said in the smartwatch space too. In the short period I had the Suunto 7 for review, I had a hard time remembering exactly what each button did. Even though you can change the function of the middle- and bottom-right buttons, to open different apps, I left them as the default of music controls and stopwatch (I just had to check what both did before writing that) because I was much happier using the dedicated and non-changeable Suunto button instead (top right).

Suunto has already established itself within the fitness tracker space by offering customers a more comprehensive range of sports to track using the dedicated app, compared to the likes of Fitbit. While this is great and many customers may find a use for it, I personally don’t see the need. Each sport measures in practically the same way – time elapsed and heart rate – so the only real benefit I can see is that it allows you to remember how many calories you burned, or the amount of time you spent doing each exact discipline. 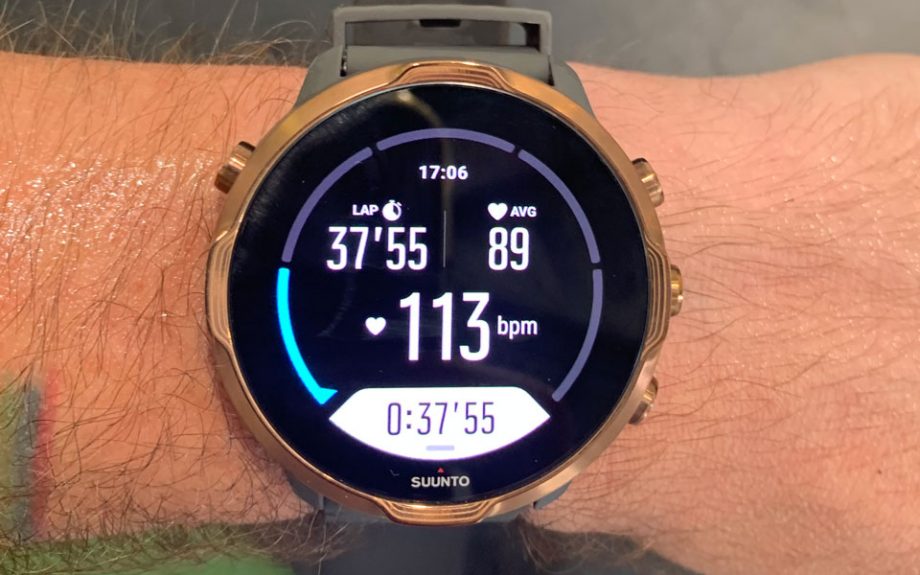 The way in which WearOS tracks your fitness data is similar to the way Apple does with its offering and I’d say it will come down to your personal preference of how that data is displayed that will determine which watch you go for. Yes, you can install third-party apps on both, but the default software should work for most users.

You need to wear the Suunto 7 all the time to generate any worthy data from it, instead of just strapping it on for a one-hour gym session. But since it doubles up as a smartwatch too, this shouldn’t be a problem. Once you get some data, Google’s Fit application displays it in an easy-to-understand format using a combination of bar charts, circles, and octagons.

…But There Are Too Many Apps

One thing I did notice with Suunto’s watch is that you need a fair few apps to get an overall view of the data it stores. You need the WearOS app to make changes to the watch face and get a basic breakdown of health data tracked by Google Fit. Then you need the dedicated Google Fit app to view a day-by-day breakdown of your data. Data can come from both your watch and Apple’s Health app if you use an iPhone.

And then you also need the Suunto app to view your workout data. This is data that comes from whichever workout or sports option you choose on the watch, such as the basic indoor training option I selected for my gym class. You can also use the Suunto app to watch ‘How To’ videos and gaining direct access to the Suunto store.

The Google Fit app is the one I’d recommend users install, as ultimately, it does the best job of the three of relaying your workout data. It also tells you how much more you need to move in order to complete your next goal.

Wear OS Is A Wonder

This was my first time using Google’s Wear OS software. As an iPhone owner, I have an Apple Watch – although I rarely use it anymore – so I was a) skeptical as to how well my phone would work with Google’s software and b) was interested to see how much they differ. Thankfully, the iPhone works brilliantly with the watch software. An Android device would get slightly preferential treatment, but by having an iPhone you’re not locked out of accessing the main bulk of features.

As an operating system, I found Wear OS to be quick and responsive on the Suunto 7. Swiping through the various screens and scrolling through the apps lists was a breeze, and search results loaded quickly when connected to wi-fi via my iPhone.

It has full, built-in access to Google’s Play Store of apps, so you don’t need to transfer apps from your phone – as with Apple’s Watch – instead, you can carry out the entire process from the watch itself.

However, you can’t respond to messages from the watch itself, you can only be notified before having to revert back to your phone to take any action. There’s also a lot of swiping to do to navigate through the menus, and as with the buttons, I forgot which direction I needed to swipe in to get to the menu I wanted. This is just a learning process though and I imagine with more time, I’d be able to breeze through it with ease. 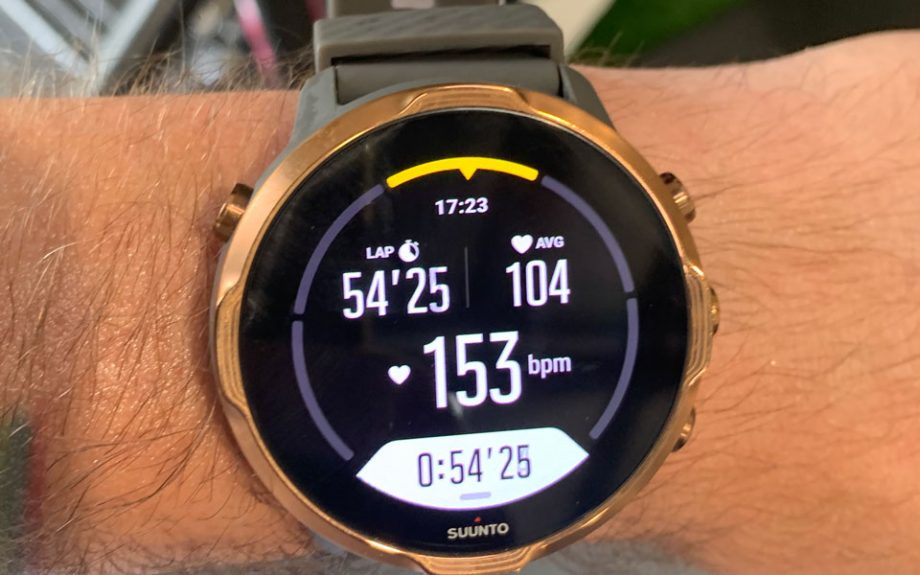 Battery life has always been a chink in the armour for smartwatches. My Apple Watch for example barely makes it past a full day on a single charge, and that’s without even using it too much. The Suunto 7 is capable of lasting for a few days, but only if you turn the GPS tracking off, from constant to just when you’re tracking a run or cycle for example.

After I completed my gym workout on a Tuesday morning, I took the watch off and left it on my bedside table, where it made it all the way through to the Friday before conking out. This will be dramatically reduced with extra usage, but my Apple Watch would have died out much earlier under the same conditions.

Overall, I was pleased with the Suunto 7. It has a wealth of features and the fact it can connect to my iPhone and not restrict me from accessing the vast majority of its features is a huge bonus. I would have liked it to be a tad smaller, but I imagine for real fitness enthusiasts, the legibility offered by the larger screen will be useful.

I wouldn’t wear it on a daily basis, but that’s only because I much prefer wearing a conventional analogue watch on my wrist. If I want to track my health data at the same time, I’d turn to something smaller such as a Fitbit Charge 3 to wear on my other wrist.