The land of the rising sun is a place of vast juxtaposition. It’s a country where you will find some of the world’s most conservative people participating in some of the most outlandish activities.

It’s this odd mash-up of tradition and modernisation that makes Japan a truly unique destination  for explorers seeking an assault on the senses. Beyond the facade of salary men and neon lights, you’ll discover a country which has long-hidden traditions alongside the general encounters of ‘WTF-ery’ around every corner.

This is Japan, taken via the off beaten path. From the cuteness of cat island to the coolness of ninja school, these are eight of the craziest things to do in Japan. 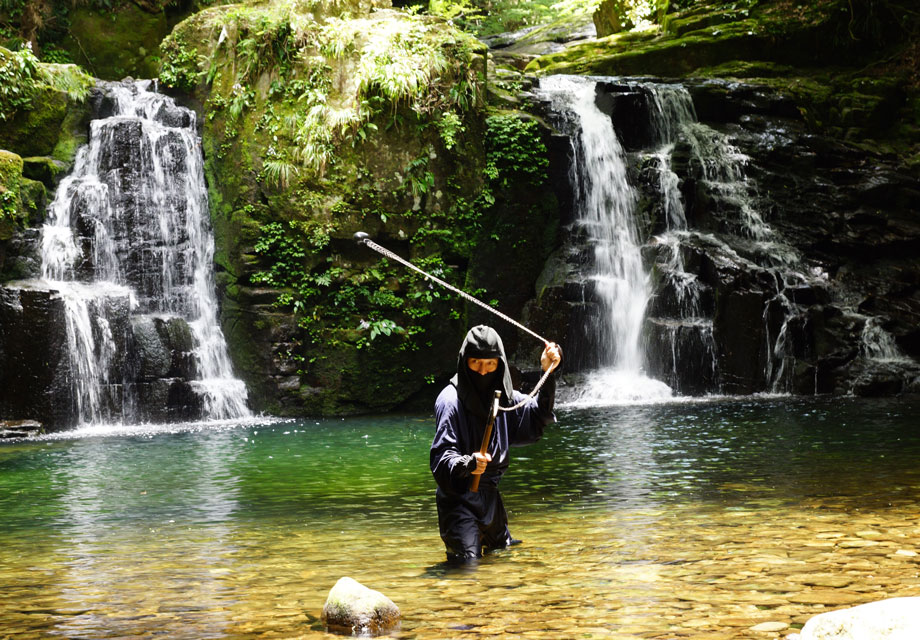 Hollywood has long been enthralled by the mysterious art of the Ninja, a masked assassin who'd to run around at night and dispose of enemies with unwavering stealth. In history, the Ninja originated from the Mie Prefecture in southern Japan. Today that art is less of a secret and more of an attraction where tourists can get first hand experience in Ninja practices and becoming Ninja. The Ninja museum located close to Iga Ueno Castle showcases all of the century's old artifacts, weapons, secret passageways and traps doors that the special clan used to use. If you want, you can even enrol yourself into Ninja school which includes hands-on demonstrations on how to throw shurikens (ninja stars), how to wield a sword and how to use the secret codes of the Ninja. Mastering the art of espionage and survival never sounded so cool. 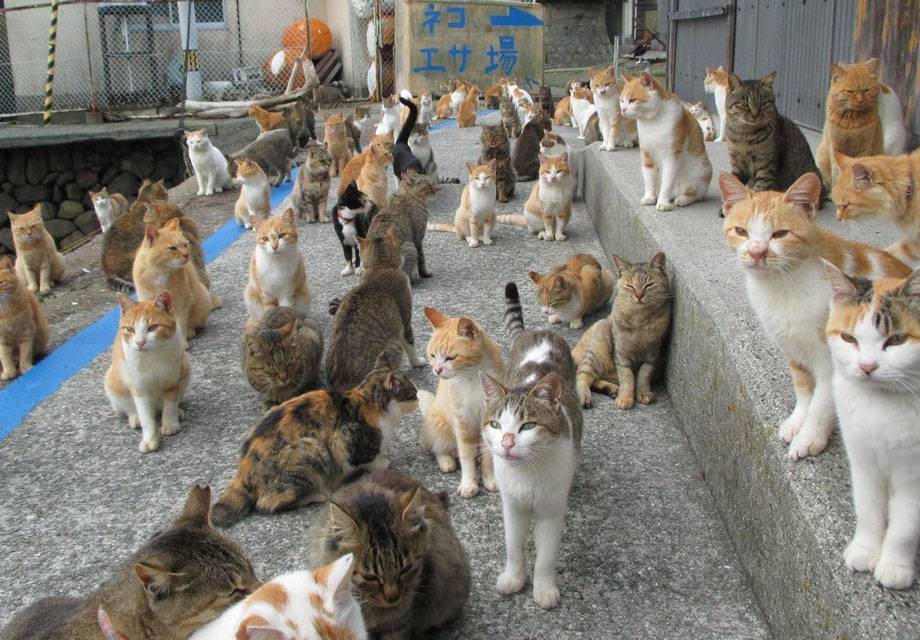 If you're a dog person then this is one place that will scare the hell out of you. Japan's Cat Island which is formally known as Tashirojima has been completely overrun by feral felines. We're talking five cats to one human resident. The story of the island begins with local beliefs that the cats would bring luck and good fortune. As a result, the feral animals were left to breed and continue to be treated like royalty today whilst being cared for by the last remaining human inhabitants of the island (dwindling from 1,000 to less than 100). Tourists and cat lovers around the world have been flocking to the island since it was uncovered. If you do decide to visit, don't bring your dog as it's against the rules. 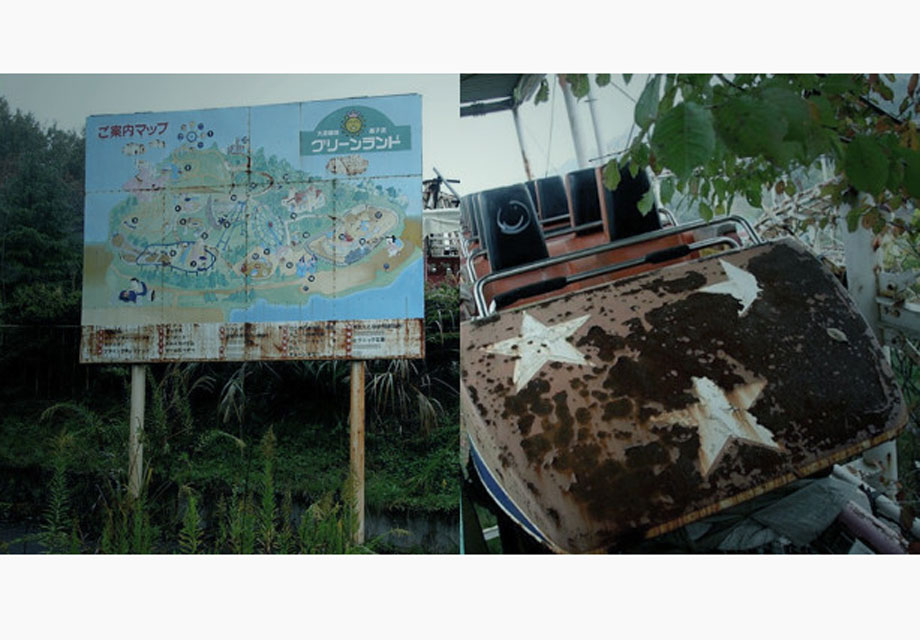 This is every kid's nightmare come true. An amusement park that was built in the 1970s is believed to have caused numerous deaths from its rides. The park only lasted two years after opening and was abruptly shut after that. The park's location is only 250km from Tokyo but it is not easy to find as it's extremely remote and not indicated on any maps. The park did reopen in 1986 only to run until 1999 where it closed for good and was completely abandoned. This mysterious park now belongs to the sprawling trees and whatever else may linger around. You can get there via a 15-minute walk from the Abukuma Express Line at Mukaisenoue Station. 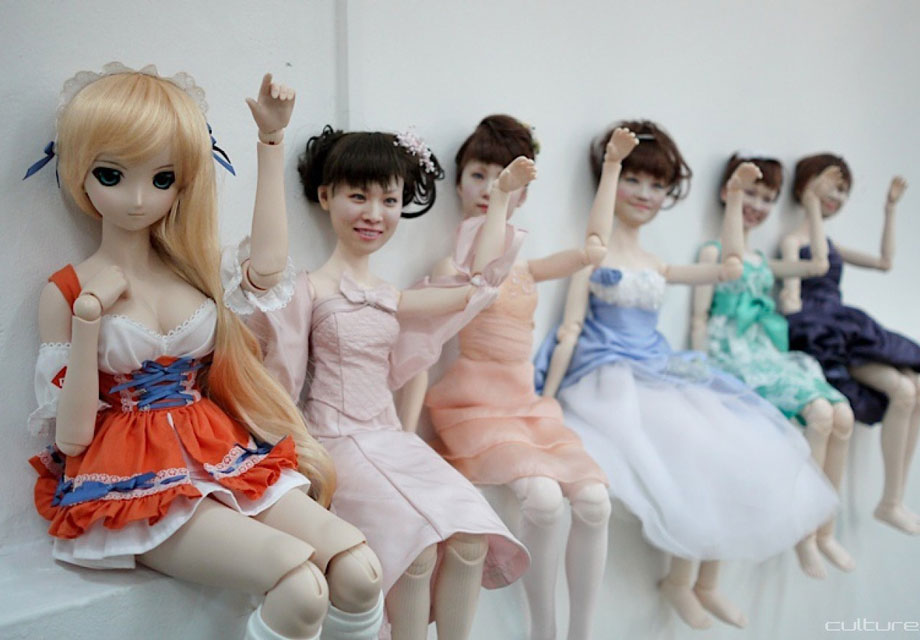 Humans are still a fair way off cloning themselves but in Japan you can get the next best thing. For a fee of $1,750, the Clone Factory will take a 3D digital scan of your head and then print it out on a 3D printer before attaching it to a 20-inch doll. The result is a creepy-ass figurine which looks exactly like you for your bedside shelf. Located in Akihabara, the factory will also allow customers to choose and dress their clone. Costumes range from Stormtrooper outfits to wedding dresses to a straight jacket. We made that last one up. But we're sure you could find one. 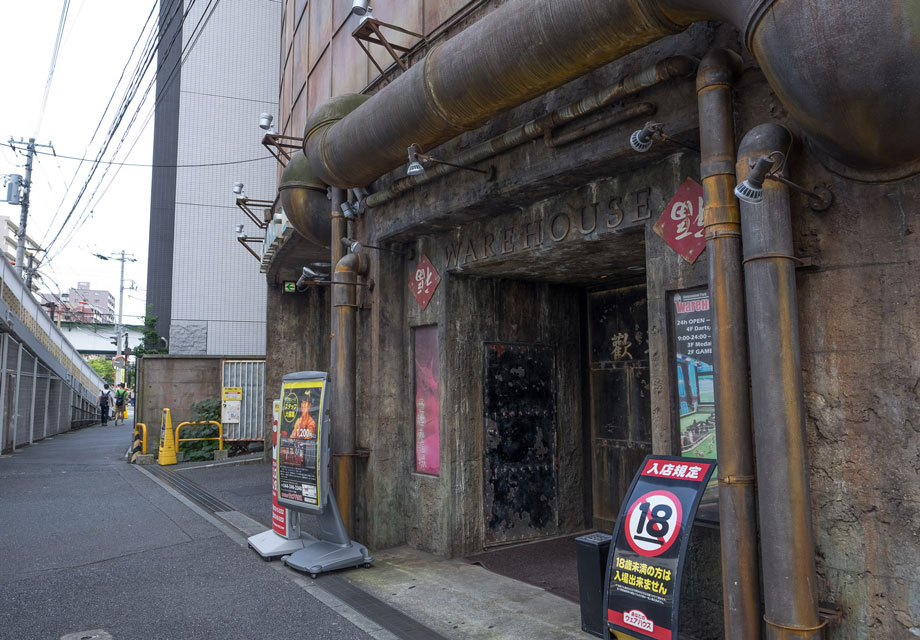 If you're a fan of seedy arcades and Blade Runner then this is the perfect leisure spot for you. It's not really seedy, it's just made to look that way. Inside the Anata No Warehouse is a maze of alleys and rundown shopfronts inspired by Hong Kong's Walled City of Kowloon. Transcend the rusty walls and grimy fit out and you'll be greeted an endless array of arcade video games. Another world awaits you in crazy neo-Japan. 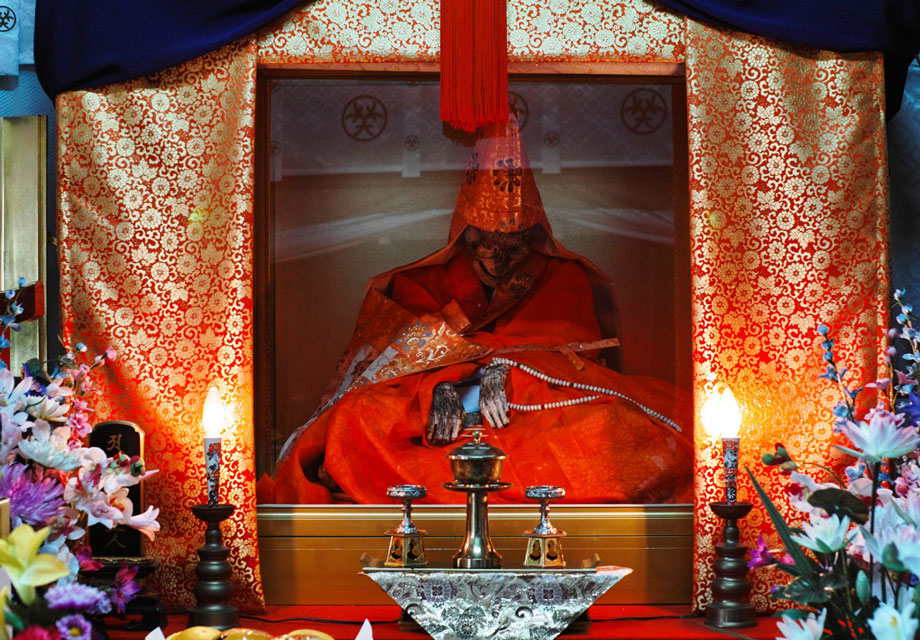 Seeing the self-mummified monks of Japan doesn't exactly sound like anyone's cup of tea, but wait until you hear the story behind it. There are currently around twenty eight sokushinbutsu (self-mummified monks) across northern Japan. The morbid act of self sacrifice follows an ancient form of Buddhism called Shugendō where self denial is the holy motive. Priests would embark on a diet of nuts and seeds for three years whilst taking on strenuous physical activities to rid the body of of any fat. After this phase they would eat bark and roots for the next three years before drinking a poisonous tea taken from the sap of the Urushi tree. This sap is commonly used to to lacquer bowls but in the human body, it causes vomiting and a rapid loss of bodily fluids whilst killing off any maggots that would eventually cause the body to decay after death. The eventual cause of death is even more gruesome. The monk would lock himself in a stone tomb the size of his body in the seated lotus position. His only form of connection to the outside world would be an air tube and bell. The bell was rung once a day to indicate to others that he was still alive. When the bell ceased to ring, the air tube would be removed and the tomb sealed. You can visit the most famous monk, Shinnyokai Shonin, of the Dainichi-Boo Temple on the holy Mount Yudono. 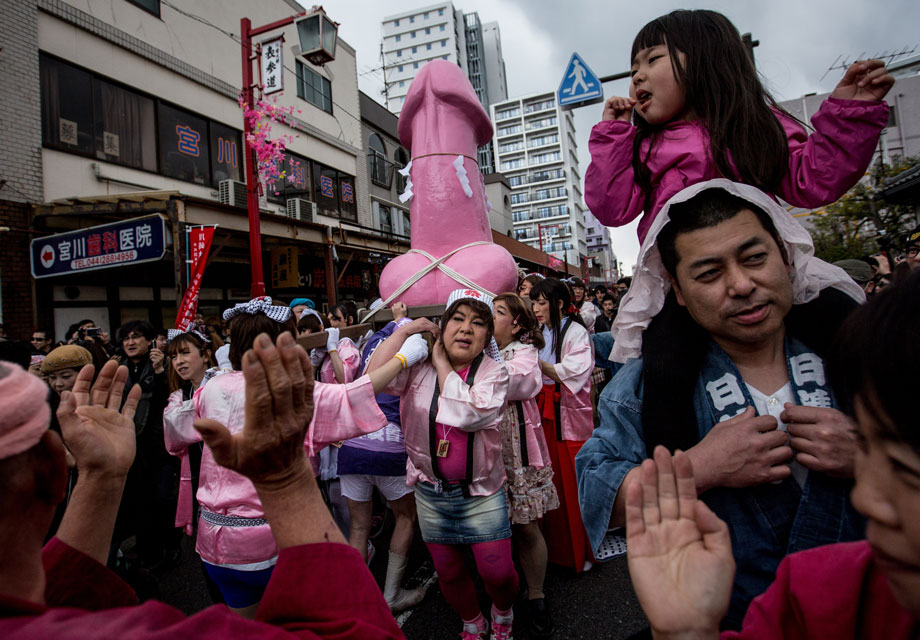 A penis festival for the whole family. That's essentially what the Kanamara Matsuri Festival is. Actually we lied, there's also vaginas and prostitutes involved. Tales date the origins of Kanamara Matsuri festival back to Japan's Edo period where a local woman was severely affected by vagina dentata. The local blacksmith came up with a solution in the form of an iron dildo. The giant penis shrine which gets hauled around is a dedicated to this legendary blacksmith. There's also a more believable side of the story which details an outbreak of syphilis in the area during the 17th century. The shrine itself was a meeting point for prostitutes to pray against contracting the disease. 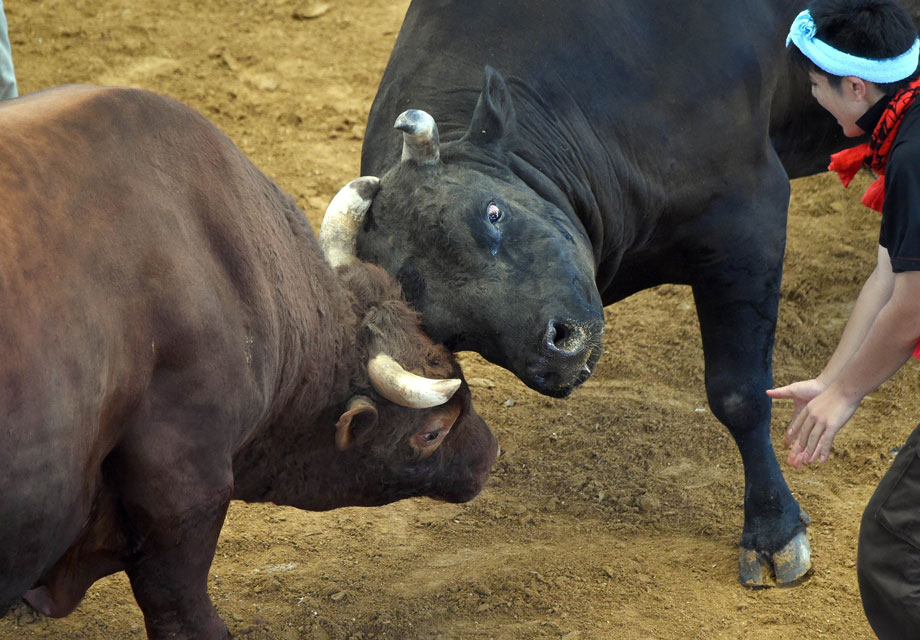 Unlike like Spanish bullfighting, Okinawan bullfights pitch bull against bull whilst their handlers in the ring act more as referees who prevent them from getting seriously injured. The bulls which can exceed a tonne lock horns and win by pushing the other outside of the ring. Short of a few cuts from the horns, the bulls are not harmed and the winner is applauded by the adoring fans during its lap of honour. You can see this spectacle at the Okinawa City bull ring.