It’s perfectly understandable to see celebrities forgoing their usual luxury outfits in favour of more laidback and relaxed garments instead during the quarantine period we’re finding ourselves in right now. After all, if they’re leaving the house less than usual, they’re less likely to be spotted by the paparazzi, so what they look like can take a back seat.

However, there appears to be one man who says “up yours” to no-cares fashion during the lockdown, and that’s Conor McGregor. The Irish MMA fighter always likes to go large when it comes to his outfits and accessories, and his latest is no different. Fresh from showing us how to nail the perfect pull-up, McGregor made another post on his Instagram account to promote his own fashion label, August McGregor while collecting some firewood.

It’s a great fit too, comprising well-fitting red/pink polo shirt – US$75 – tucked into a pair of skinny fit dark navy jeans and finished with a pair minimalist black sneakers with white soles. It’s certainly a stark contrast to some of the outfits we’ve seen some of Hollywood’s elite wearing when they’ve ventured out the house – Kanye West may be a slight exception to that rule, pulling out one of the most bouji facemasks we’ve seen.

But it’s Conor’s accessory game that’s particularly on point (although, no surprise there), with a Tom Ford belt and a Patek Philippe Nautilus watch. Conor’s belt is from the American fashion designer’s reversible range and comes in a variety of colours, you can view the range and grab one for yourself from Mr Porter. 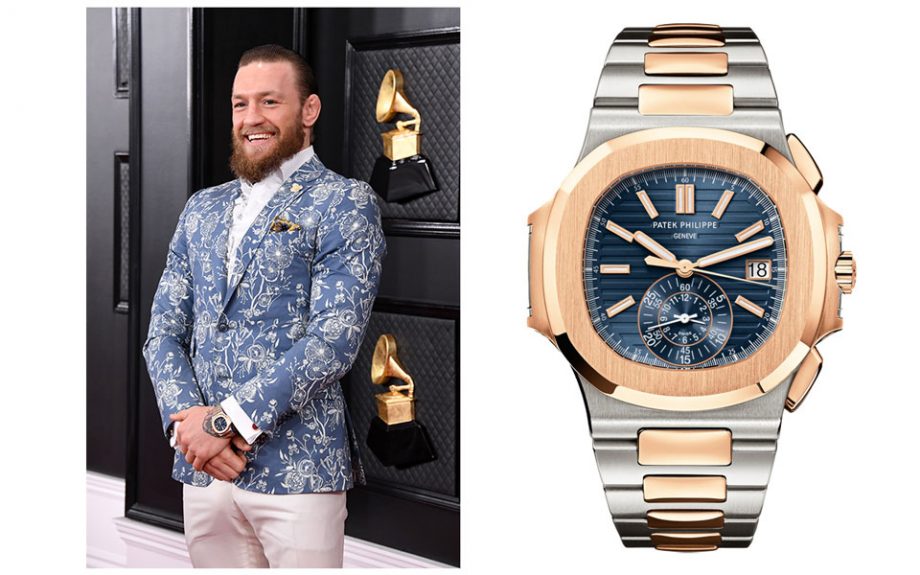 The Patek Philippe Timepiece meanwhile is the Nautilus 5980/1AR-001, complete with a two-tone bracelet, which will set you back around AU$150,000. Conor has worn it before when he attended the Grammy Awards in January earlier this year, and it joins the all-gold Nautilus he’s been seen wearing on previous occasions.

He might not care so much what he looks like in the ring, but it’s clear Conor McGregor takes a conscious standpoint on looking good whenever he’s out of it.