Planes without a license to fly… 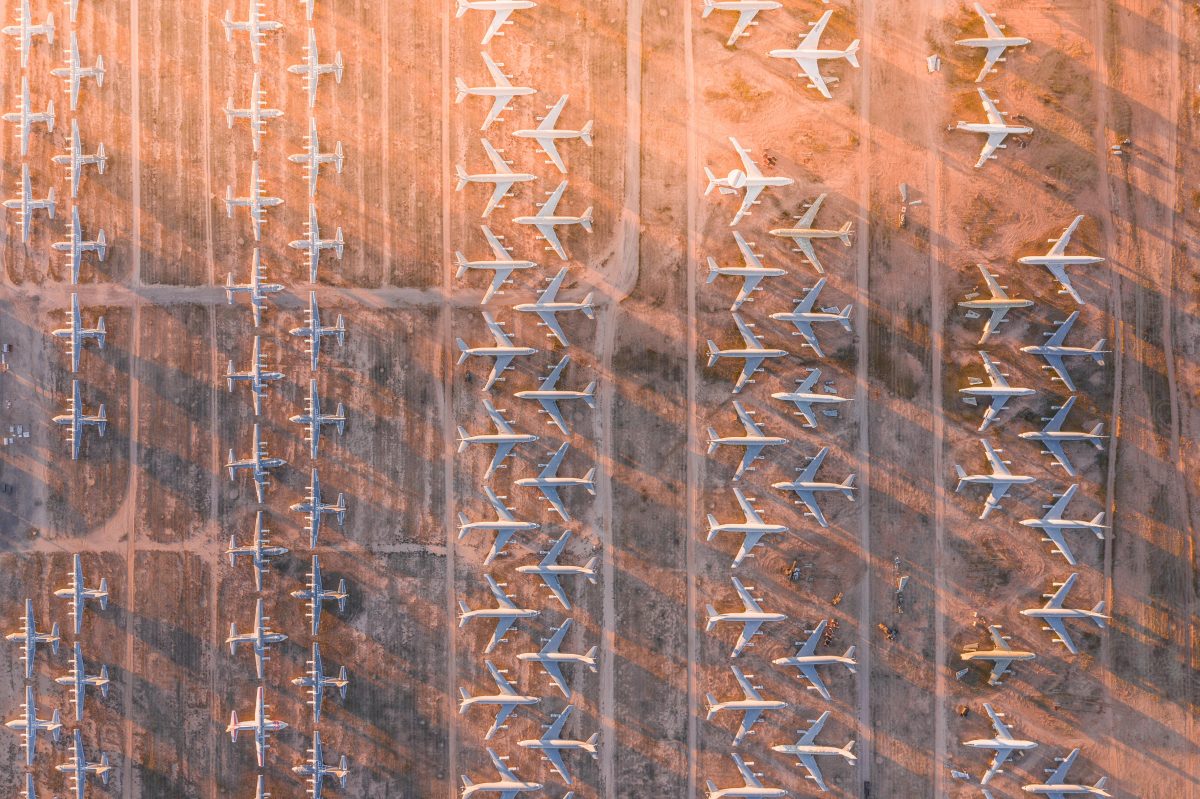 Thanks to the current pandemic, airlines are now facing the organisational equivalent of a volatile (and influential) first class passenger assaulting a flight attendant because they weren’t served their Macadamia nuts on a plate (true story).

Though there are some cargo planes getting more use than they have in a while, we are now facing an unprecedented crisis of out-of-action commercial fleets.

CNN Travel painted a picture of this last night, “Earlier this month, a Boeing 747 freighter took off from Lleida-Alguaire Airport in Spain, bound for Chicago and laden with urgent medical supplies. It had arrived at this little out-of-the-way airport, some 150 miles west of Barcelona, a couple of months earlier.”

“Its operator, New York’s Atlas Air, had parked it there due to lack of demand in the cargo sector – until the coronavirus pandemic came along and turned the world on its head.”

“Lleida-Alguaire, and other industrial airports like it, is where airplanes that have been taken out of service wait on remand,” CNN Travel explained. “For some, like that 747, there will come a reprieve. For others, it’s Death Row.”

Providing a comparison point for the current situation, CNN Travel then explained that Lleida-Alguaire is the airport that currently keeps the largest number of Boeing 737 MAX planes (the ones that were sidelined last year) in storage in Europe. Reason being? It’s not a major hub (big European airports charge more around AU$400 an hour for plane storage).

“Considered a white elephant since its inauguration in 2010, the lack of regular commercial traffic (before the current crisis, it was handling couple of regular flights per week, plus the occasional charter) has offered [Lleida-Alguaire] a chance to specialize in a little-known, but essential, segment of the aerospace industry,” reported CNN Travel.

“Two Nordic airlines – Norwegian and Icelandair – have sent their MAX fleets to be stored at Alguaire, a total of 10 shiny new aircraft. Some of them had literally come out of the factory: they just had time to log a couple of revenue flights before being grounded.”

This situation is now set to play out the world over as airlines seek more cost-effective ways to store and maintain their grounded commercial fleets. As Bloomberg reported last week: “More than 16,000 passenger jets are grounded worldwide, according to industry researcher Cirium, as the coronavirus obliterates travel and puts unprecedented strain on airline finances.”

Of course not all these aircraft will end up on the chopping block. But the longer the global travel shutdown goes on the more otherwise healthy jets will find themselves more expensive to maintain than to scrap or sell.

“The number of passenger jets in service is the lowest in 26 years,” (Bloomberg).

Beyond renting space for them: “Aircraft can’t simply be dusted back into action,” Bloomberg reports. “They need plenty of work and attention while in storage, from maintenance of hydraulics and flight-control systems to protection against insects and wildlife.”

“Then there’s humidity, which can corrode parts and damage interiors. Even when parked on runways, planes are often loaded with fuel to keep them from rocking in the wind and to ensure tanks stay lubricated.”

“Nobody thought this magnitude of preservation would need to be done,” Anand Bhaskar, chief executive officer of New Delhi-based Air Works, a plane repair and maintenance company. told Bloomberg. “Parking space is a problem. These are logistics nightmares which we’re trying to work around.”

In light of this, airlines are hunting for space everywhere from Australia’s outback to the Mojave Desert in the U.S.

What happens when they cost more to maintain and house than to scrap or sell? While that’s not yet happening to the world’s more recently-grounded jets (as it’s only been a month or so since the shutdown took full effect) the aforementioned situation in Europe’s Boeing 737 storing Lleida-Alguaire airport gives us a sneak peek at what could happen elsewhere if the industry doesn’t start flying again.

“As owners of classic cars know well, engines have to be started every now and then – and the same goes for aircraft after they have remained idle for some time,” Miguel Martín, technical director at Servitec Aircraft Maintenance, the firm that takes care of the MAXes stationed at Lleida-Alguaire, told CNN Travel.

“Not all aircraft need it. It really depends on the program they are on, but, yes, we do start the engines as well and make them run for a while to make sure the moment they are called up to fly again everything works.”

“This is something that not all of Alguaire’s visitors are going to be able to do [though],” CNN Travel reported, “because this airport also serves as an end point for old aircraft that are being retired from service.”

“Many of these aircraft are still perfectly airworthy. What happens is that they have reached the point in their operational lives when it’s no longer economical to invest in their maintenance.”

What happens then? An inventory is compiled of all its parts and spares and the aircraft is then flown to an industrial airport, such as Lleida-Alguaire, where it’s inspected, tested and dismantled. Movable elements (fluids, oils, fire extinguishers, ramps) are stripped, and the re-purposing – carefully – begins.

“The engines are usually the most valuable element. After the nacelles are taken away, the engine itself is dismantled whole, leaving the internal mechanisms intact,” CNN Travel explains.

“With the engines gone, it’s the turn of the panels, which protect key areas within the aircraft. The structure is laid bare so that technicians can access the planes innermost systems and retrieved those parts that are of interest.”

“When we switch off the power, it is the official death of the aircraft, there’s no way back,” Servitec’s Miguel Martín told CNN Travel, before revealing that out of an Airbus A330 currently being dismantled, they managed to extract more than 4,600 different parts.

Then, as CNN Travel reports, “every item that is taken out of the aircraft is cataloged, cleaned and processed so that the owners of the aircraft can take them wherever they are needed.”

Next, if the plane is owned by an airline with a large fleet of the same kind of plane, it might use those spares in-house. But more often they are sold on the aftermarket by companies that specialize in purchasing aircraft nearing the end of their operational lives.

They also need to be re-classified as operational, even if they come off their predecessor in mint condition: “In most cases these parts can’t go straight into another plane, because the moment they’re struck off the aircraft they become technically unserviceable… They must be transferred to an approved repair shop to undergo recertification,” (CNN Travel).

Making this process even more complicated (and crucial) is that, even if serially produced, plane components are not always identical, as some have been customized at the request of operators – and manufacturers often introduce small modifications too – which is why every single part should be individually identifiable and possess an impeccable paper trail.

Once the airframe has been stripped of every valuable item, it’s cut for scrap. Let’s hope the current health crisis ends as quickly as possible and this fate doesn’t befall too many otherwise healthy aircraft.