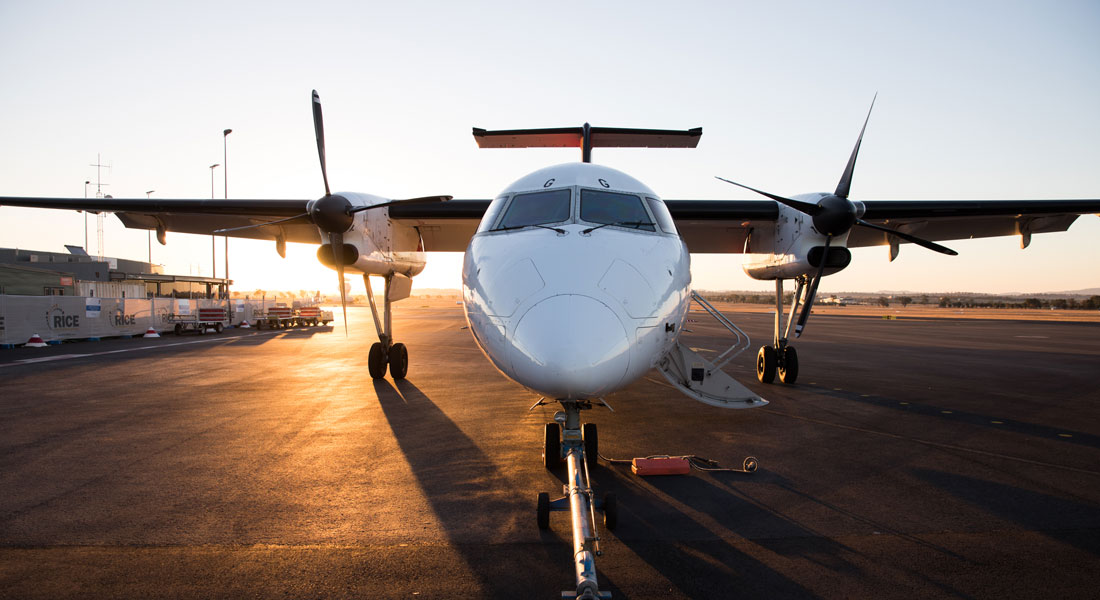 Will 2020 go down in history as the travel industry’s 2008? Only time (and next year’s rebound) will tell. In the meantime, let’s focus on the light-hearted travel news we have on-eyeball. This morning that’s Qantas’ decision to start running a turboprop on flights from Sydney to Melbourne.

Last year, an any given day, the Sydney to Melbourne corridor would have seen 70 plus flights operating each way. This long weekend was a different story: on Saturday, April the 11th, Virgin Australia had no flights and Qantas had a single service down to Melbourne.

That flight was a turboprop and it went via Canberra.

As Simple Flying, an aviation news website, reported on Sunday, “On Saturday morning, a 74 seat QantasLink Q400 (the turboprop, otherwise known as the ‘Dash 8’) trundled down to Melbourne via Canberra. It took nearly three hours. In the evening, Qantas’ low-cost subsidiary Jetstar flew an A320 down to Melbourne. This later flight went direct.”

“If you think that’s an anemic schedule, the pickings will be slimmer next week.”

Fast forward to today and that rings true: “Disregarding a smattering of government underwritten international services, freight flights, and FIFO mining operations,” (Simple Flying), Qantas and Virgin Australia have all but grounded their domestic fleets (their international fleets have been grounded since the end of March).

Virgin Australia is operating a singular domestic service, six days a week, return, between Sydney and Melbourne. A quick check of their booking page suggests these will not be full flights (at the time of writing, there are still seats available).

Qantas, meanwhile, is now running a single daily Boeing 737 return service between Sydney and Melbourne, supplemented by a singular Jetstar service on Saturday and the aforementioned Q400 turboprop service, operating on Monday, Friday, and Sunday via Canberra.

Some Australian residents, like Geoff Power, a cattle and vegetable grower in Western Australia, have taken to Twitter to herald the decision, and suggest it become a permanent addition to the roster.

S @ScottMorrisonMP PM, why is there not a high speed proposal for this to drop flights on a Perm basis? Qantas Is Flying From Sydney To Melbourne With A Turboprop – Simple Flying https://t.co/IK6AQtOQLH

This may not be as far fetched as it sounds: while the turboprop – an aircraft which uses a gas turbine core to turn a propeller – is not exactly a common aircraft these days, it is still used – even under normal circumstances – by Qantas for short routes where reaching maximum speed is not a priority (like Rockhamption to Brisbane).

This is because, provided you don’t need to go too fast, Turboprops are more fuel-efficient for shorter journeys than jets (and are also lighter, giving them greater performance for takeoff).

However, given the number of people who usually look to commute from Melbourne to Sydney, and how quickly they’d like to do it, we’d say once things are back to normal the turboprop will be put back on it’s normal duties of shorter, less in-demand hops.

For Qantas to be using a turboprop for the Sydney to Melbourne route though, is a sign of the times – the drastic reduction in traffic for the corridor comes with a nasty drop in revenue. As Simple Flying reported on Sunday, “This route [usually] earns Qantas more than USD$630 million annually in revenue. Add in Virgin Australia’s take and the route between Sydney and Melbourne is a billion dollar revenue stream that’s vanished.”

Qantas CEO Alan Joyce has said Qantas wants to help ferry essential workers and equipment around the country. But the airline, of course, as we reported last week, is also in a position where it must preserve cash – a fine line to walk.

Last week both Qantas and Virgin Australia tightened their loyalty programs in what appears a bid to reduce the number of customers ‘cashing out’ their points (to buy products) all in one go.

Both airlines have also offered 12 month status extensions to frequent flyers and increased customer’s options when it comes to cancelling or re-booking their flights at this time.