A lot has changed – but Sydneysiders remain as creative about getting in the water as ever. 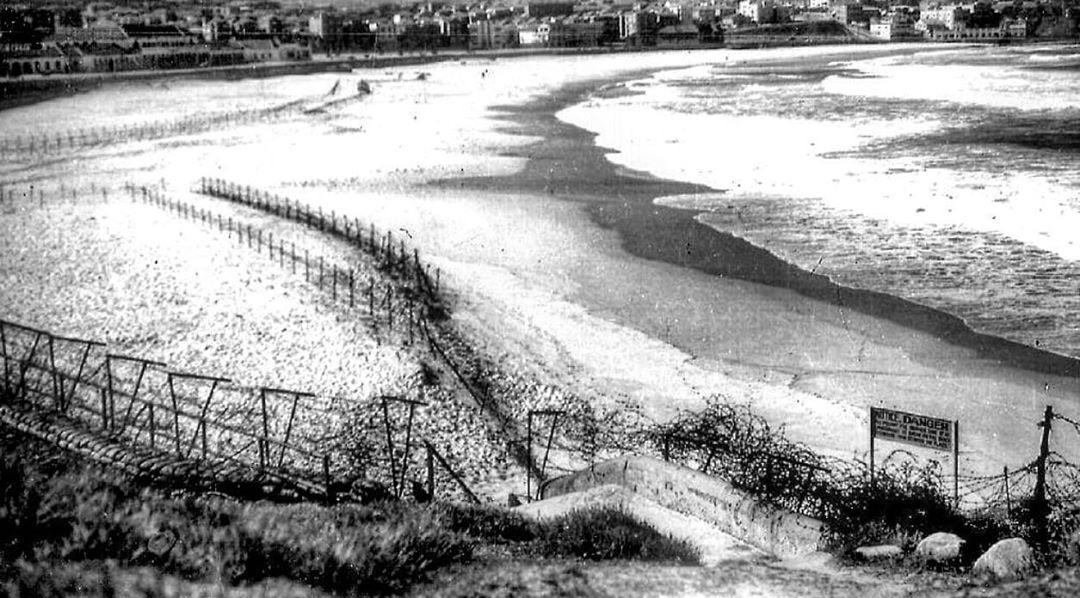 Australia’s iconic Bondi beach has been shuttered for more than a month. Today it has finally re-opened for exercise, during weekdays, between the hours of 7am and 5pm, with “surf n’ go” lanes now lining the beach. The message? No hanging about.

While residents (and international media) have been shocked to see the beach return to its former state of surreal glory, this is not the first time Bondi has been left to run wild.

As The Anzac Memorial, an organisation dedicated to the remembrance of Australians who have served in military operations, pointed out yesterday, a similar scene (though very different circumstances) unfolded during WWII.

“With the threat of Covid-19, some of Sydney’s beaches are closed and others are only open for a few hours a day for exercise. But this is not the first time swimmers, surfers and sunbakers have been restricted access to the sand and the sea,” The Anzac Memorial wrote.

“During WWII, the possibility of invasion by the Imperial Japanese Navy alarmed Australia. The fall of Singapore and the bombing of Darwin in February 1942, attacks on ships off Australia’s east coast, and the invasion of Sydney Harbour by three Japanese midget submarines on 31 May 1942 only intensified these fears.”

“People living near the coast from Palm Beach to La Perouse had to adapt as their public spaces were taken over by the military. Many beaches and coastal golf courses were used as training camps and anti-aircraft searchlights were installed along the coast,” The Anzac Memorial continued.

“Local residents were required to black out their windows at night, and car and streetlights were prohibited. All swimming and promenading after dark ceased. Yet the most significant change to the landscape was the installation of fortifications across Sydney’s beaches.”

“Iron stakes, concrete tank traps and thousands of kilometres of barbed concertina wire were strewn across the sands and promenades as a barrier to enemy invasion.”

“The transformation of the coastal landscape was starkly conspicuous, and for a while, it disrupted daily life. Numbers of Sydneysiders visiting the beach dropped dramatically and local businesses suffered. Yet swimming had not been barred and canny locals found ways through the barbed wire to reach the surf.”

“In September 1943, Prime Minister, John Curtin, declared that ‘the danger of invasion has passed’ and the beach fortifications began to be dismantled – although Freshwater Beach was still covered in iron stakes and barbed wire as late as 1946.”

It’s fair to say both Bondi…

Are you ready for tomorrow? These are the ‘Surf n Go’ lanes ⬆️⬇️ being set up on Sydney’s Southside Beaches today. Here we go! If everyone behaves, we get to surf any time between 7am-5pm during the weekdays 🤙🏼 And just in case you don’t know or don’t get it yet, THERE IS NO HANGING OUT ON THE BEACH!!! 🚫 #legalsurfing

A Sunday surf has never looked so good! 🏄🏼‍ Arguably one of Sydney’s best surfing beaches, Freshwater Beach near #Manly is renowned as the birthplace of Australian surfing culture. In fact, it’s where Hawaiian Duke Kahanamoku held his famous surfing demonstration way back in 1915, which explains the life-size statue of him on the northern headland. #ilovesydney ⠀⠀⠀⠀⠀⠀⠀⠀⠀⠀⠀⠀⠀⠀⠀⠀⠀⠀⠀⠀ 📸 @jwillyagaze

It’s also fair to say, despite the different threat we face today, Sydneysiders are as creative about getting in the water as ever.

Not convinced? If you didn’t hear the broadsheets blast beachgoers for laying bums up at Bondi (before the ban) and locals persisting surfing after, then we’ll leave you with the following video, which Eastern Suburbs lensman Bill Morris posted to Instagram a week and a half ago.

Funniest thing I’ve seen this swell but also the most dangerous. Why tf would you go off there when there’s a perfectly good rip that takes you straight to the take off zone. Dumb ass’s! 😂 Original post by @wick.noods