Lucky Hiker Finds Himself Stranded In Rarest Position During Lockdown

“I couldn’t be in a better place.” 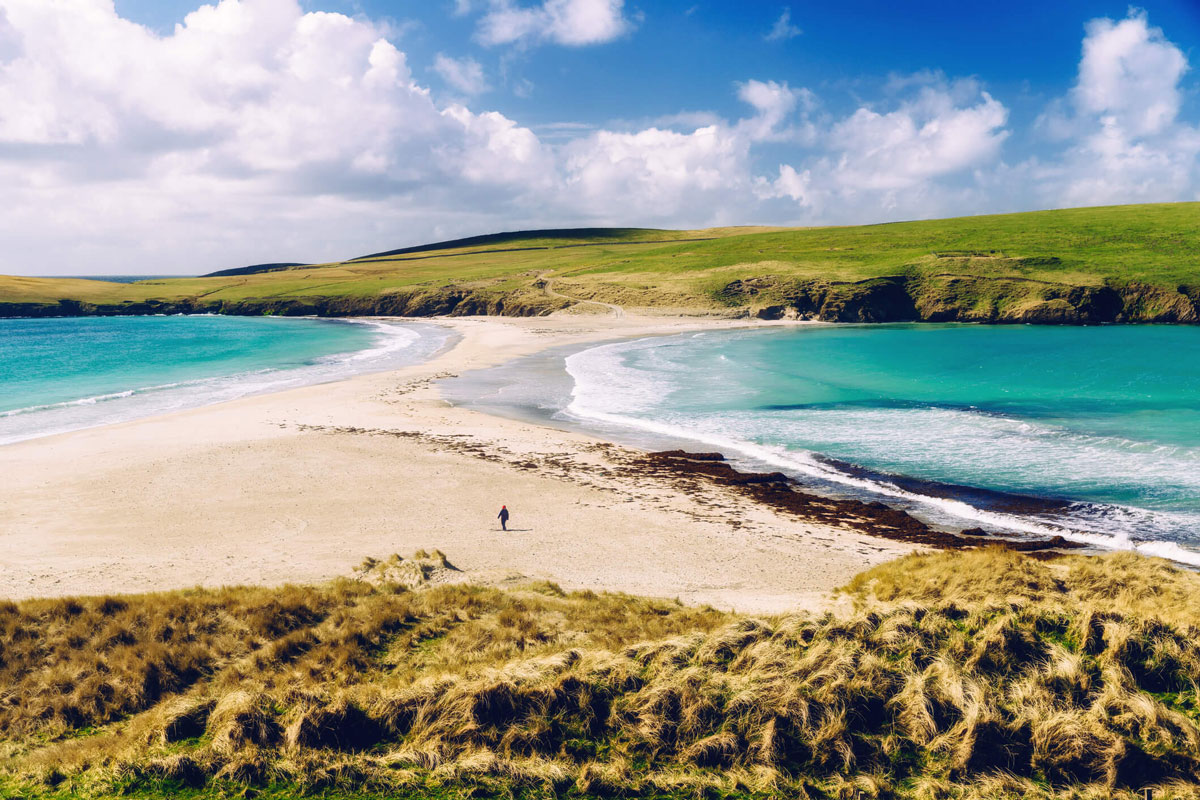 Good things come to lucky bastards. That’s the cynical perception. However, in a rare piece of lockdown news, today we have something positive: a shining example of good karma going to someone deserving.

Christian Lewis is an ex British paratrooper who is now self-isolating on a usually uninhabited Shetland island. This came as lockdown measures were introduced while he was three years into an ongoing fundraising challenge to walk the UK coastline.

As The Guardian reports, “Chris Lewis, 39, has walked 12,000 miles since setting off from Llangennith beach on the Gower peninsula near his home city of Swansea, south Wales, in August 2017.”

“He was sleeping in a tent on mainland Shetland when the government announced the introduction of lockdown measures on 23 March to limit the spread of coronavirus.”

“Lewis and his dog, Jet, travelled by boat to Hildasay, a 108-hectare island off the west coast of the Shetland mainland, and have remained there ever since,” (The Guardian).

With just a tent for protection in one of the most northerly and windswept parts of the UK, Lewis could’ve been in trouble.

But thanks to the kindness of strangers, he’s found himself in one of the best places on the planet to sit out the crisis – a cottage on a tiny remote island.

“It is just super. I couldn’t be in a better place for a lockdown,” Lewis told CNN Travel from Hildasay island. “There’s nothing here but a few sheep and an array of birds.”

Hildasay is one of the Scalloway Islands. South West of the Shetland mainland, Hildasay measures less than half a square mile and has been largely deserted since the late 19th century.

As CNN Travel reports, “Lewis receives deliveries of water from [a] local fisherman called Victor and forages for food. He makes the occasional boat trip to the Shetland mainland [a half hour trip, by small boat] for other supplies.”

While Lewis was close to completing the Shetland Islands, which has 300 islands and skerries, he has taken the postponing of his trip in good grace, telling CNN Travel, “I knew the lockdown was coming.”

“I had to make a real decision. I can’t go home, because I have no home to go to.”

“So with the help of some fellow Shetland people, who lent me a boat, I came to the island and started living off the land.”

“I can walk down now, and I’ll have a whole plate full of mussels if I want them, so I’ve got no worries there.”

Although Lewis was originally staying in a tent, “He was later given the keys to an empty house after news that he was camping on the remote island spread to its owners, who were happy to help,” CNN Travel reports.

It hasn’t got electricity or gas, but it’s better than a tent, and it’s got a nice fire – perfect for Lewis and his dog Jet. Lewis says they will stay there “for the foreseeable future.”

Lewis’ tale is also an important reminder of the challenges that face military personnel after returning to civilian life.

After years of difficult times since leaving the British Army, Lewis decided to hit the road when he was about to lose his home for the second time and couldn’t face the thought of asking for more assistance (he had previously received help from the armed forces charity Ssafa).

“I suffered really badly with anxiety and depression [in the past],” he told CNN Travel. “I knew I really needed to change something, so it really was a split-second decision.”

According to CNN Travel, Lewis “launched a fundraising page for the charity shortly before he set off and was just a few thousand pounds shy of reaching his £100,000 target at the time of writing [last week].”

“I’d had a lot of help from Ssafa, so it was a no-brainer to go and do something to help them out, and we’re doing really well so far.”

“I made the decision and within days I was gone. I really didn’t think about it too much and that’s probably why I’ve done so well in terms of how far I’ve got.”

“I started the journey on my own, but I picked Jet up along the way [in Irvine, Scotland] and basically adopted her.”

“She’s been with me for nearly two years now. I don’t think there’s a better walked dog out there.”