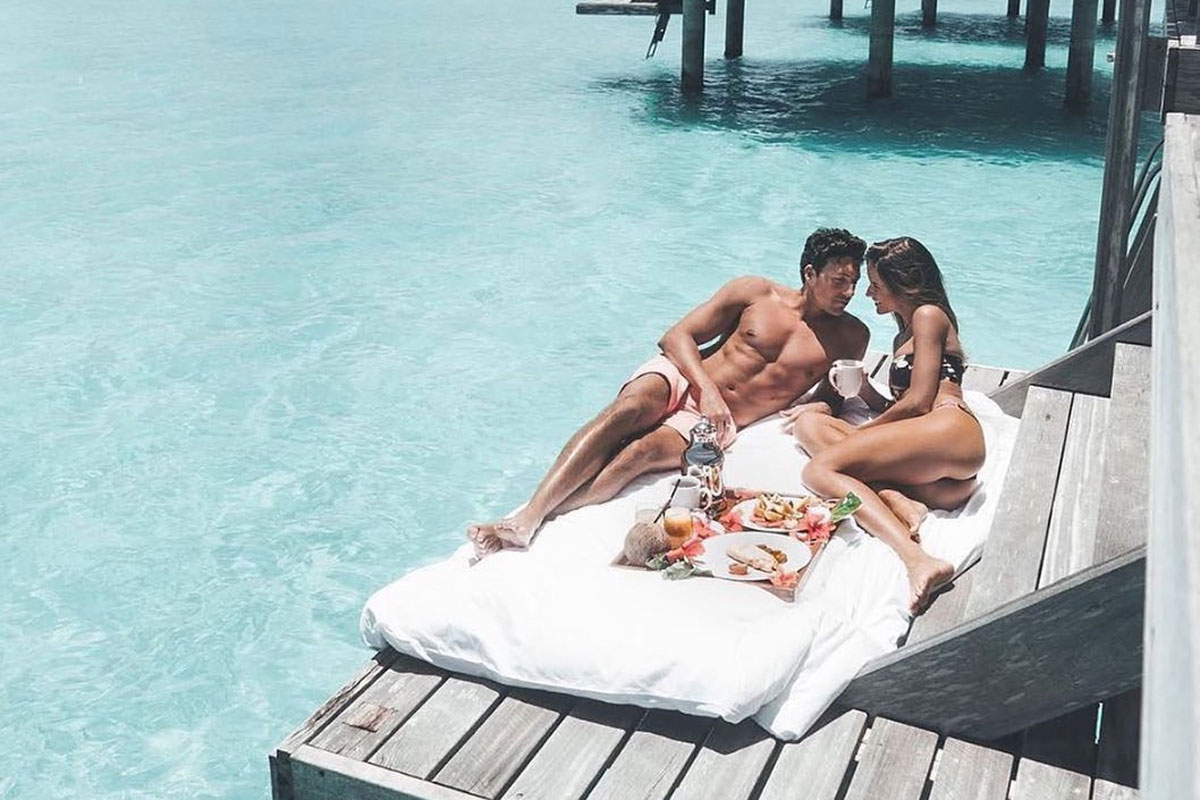 Not the couple in question (for Olivia and Raul see the embedded Instagram posts).

What would you do for an eternal honeymoon? One South African couple is getting a taste of that very question, trapped in luxury in the Maldives thanks to the current pandemic.

“Olivia and Raul De Freitas are currently on their honeymoon, at a five-star resort, in the Maldives, a nation composed of more than a thousand tiny, idyllic islands in the Indian Ocean, like a trail of smashed crystals scattered on a slab of blue glass,” The New York Times reported on Sunday.

But we don’t need to bore you to jealousy on that: the Maldives have long been known as an adult playpen of floating breakfasts, crisply ironed Hawaiian shirts and sumptuous bedsheets. Oh, and there are some nice water views too.

In any case, the just-hitched couple arrived on Sunday, March the 22nd, with a six days booked. But instead of being an opulent jumpstart to never-ending matrimony, it has turned into a lengthy – and expensive – stay.

“They had some concerns about the trip,” The New York Times wrote, “considering the mounting travel restrictions imposed in light of the new… outbreak around the world. But nothing specific that would affect them had been announced, and their travel agent assured them that, whatever policy was forthcoming, all South African citizens would be allowed back home.”

“Go ahead and have a great time, they were told.”

By Wednesday the couple received notice that South Africa’s airports would all be closed by midnight Thursday. Which didn’t leave them much time: returning to South Africa from the Maldives involves a five-hour stint to Doha, Qatar, a three-hour layover, then nine hours to Johannesburg.

“Even if they scrambled, and even if they could get a flight, the complexities of leaving their remote island ensured they’d never make it home in time,” wrote The New York Times.

Other guests faced similar restrictions, but managed to wrangle ridiculous flights that would get them home in time to their various home countries, such as the US (flying via Russia).

Olivia and Raul’s only other option was to get a speed boat to the Maldives mainland and try the airport in person. But as the South Africa lockdown commenced, so did the Maldives’, and the couple feared if they struck out on the mainland they might not be allowed back into the resort.

“Everyone could split the cost, the message noted, but the government had only connected with around half of the 40 people; of those 20, many were unable or refusing to pay. The fewer the number of people on board, the more expensive each share would become. Even so, after several days of discussions between South African representatives and the Maldivian Foreign Ministry, the flight still hasn’t been approved.”

By Sunday, they were the only guests at their resort, the Cinnamon Velifushi Maldives, which normally is at capacity this time of year, catering to some 180 guests. Its average price per night for a room, according to Google, is AU$1,253.

While it is not as flash, maybe, as the mega mansions of some of the celebrities around the world, who are riding out the current crisis is what is conventionally considered the most luxurious settings in the world, we’d argue that true luxury is about exclusivity. And in that sense Olivia and Raul win hands down – there are hundreds, maybe thousands of celebrities living in over-opulent penthouses and mansions, but only one couple living it up at the Cinnamon Velifushi.

A post shared by Cinnamon Velifushi Maldives (@cinnamonvelifushi) on Mar 25, 2020 at 6:00am PDT

Paying for the privilege, the couple “reign like benign yet captive sovereigns over their islet” (The New York Times) sleeping in, snorkelling and lounging by the pool.

That was until this Sunday just gone. But we’ll get to that later. First: how were they able to do all that while the Maldives was in lockdown?

It was able to happen because the staff were still there (and for that matter, still are), as Government regulations won’t allow any Maldivians to leave resorts until they have undergone a quarantine that followed their last guests’ departure.

“Accustomed to the flow of a bustling workday, and the engagement with a full house of guests, most of the staff, having grown listless and lonely, dote on the couple ceaselessly.”

Other than keeping calm and drinking cocktails, the couple have been working on getting home. Most recently, The New York Times reports, “they’d heard that flight permissions are supposed to be sorted out by Monday, April 6 [yesterday].”

“That was an extension from April 1, so these dates seem to merely be optimistically penciled in. No matter: The latest wrinkle, they were told, is that the Maldivian airline crew assigned for the charter won’t fly anyway, needing to rest for a day before their return flight to the Maldives.”

The upshot: they still don’t know when they’ll be able to get home. South Africa’s lockdown is meant to last until April the 16th. But, like everywhere, this is subject to continual reassessment.

“It’s incredible that we get this extra time,” Ms. De Freitas told The New York Times. But the financial toll weighs heavily. Though the pair have been paying a generously discounted rate, the bill is going to sting.

“Each day that ticks by is a chip taken out of their savings that had been set aside for a house down payment.”

“Everyone says they want to be stuck on a tropical island, until you’re actually stuck,” Ms. De Freitas said. “It only sounds good because you know you can leave.”

In any case, on Sunday, April the 5th, according to what the couple has told The New York Times, they were contacted by the South African embassy and taken via speedboat to another five-star resort, where about two dozen stranded South Africans in the Maldives are being put up. The local government told them it would subsidize a large portion of the cost of their stay.