The perfect car for a leisurely drive. 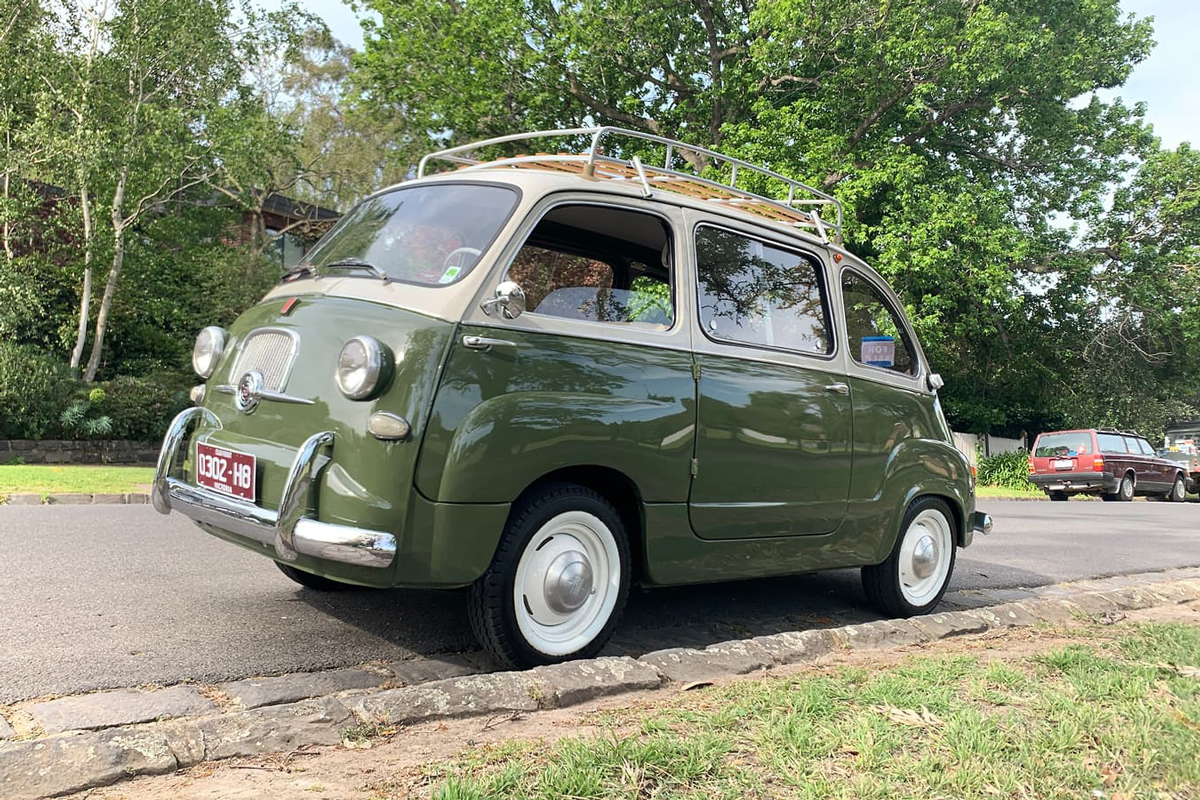 The term ‘cool’ is bandied around far too commonly these days. It’s the easy fallback word to describe something someone likes, or to quickly shut down a conversation you’re not interested in. “I went and saw so and so last night”, “cool”.

But we think we’re well in our rights to use the term to describe this 1956 Fiat 600 Multipla on Carsales, because just look at it. It’s so frickin’ cool! 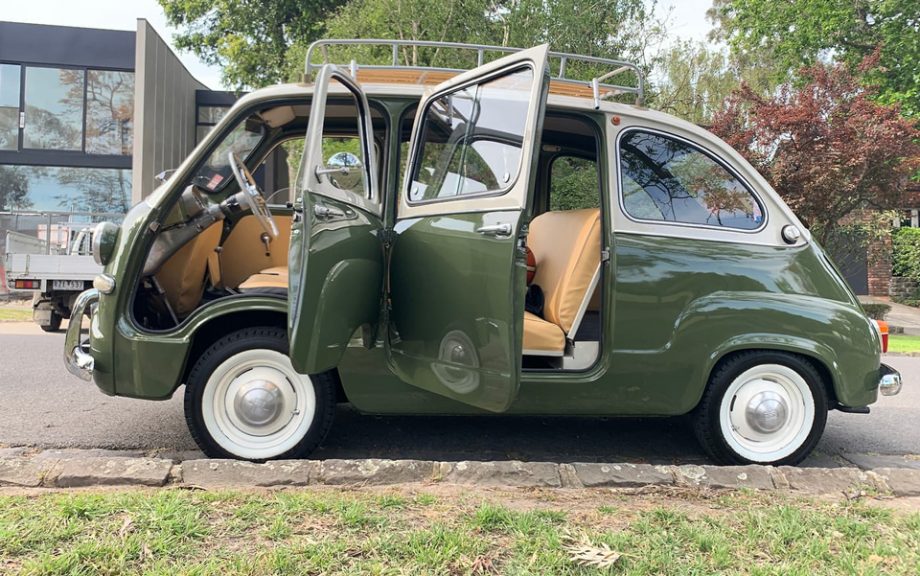 We’ll be straight up, we never even knew this car existed until we saw it while scrolling through the latest listing on the automotive resale site. But just one look was all it took to know it just had to be featured on the DMARGE website.

The Fiat 600 as a series – it was available as a two-door ‘Fastback’ or this four-door MPV – was produced from 1955 to 1969. The Fastback measured 10ft 5in, while the MPV was only around a foot longer (and only four foot longer than Chinese NBA giant Yao Ming).

The Multipla version was more of a hybrid of both the Fastback 600 and the Fiat 1100 (a small family car produced in the same period), borrowing elements of the drivetrain and suspension, respectively. It employed the same two-metre wheelbase as its smaller sibling however, a feat achieved by moving the driver’s seat over the front axle and essentially leaving zero crumple zone in the process. It also meant boot space was effectively omitted entirely (more on the solutions a little later). 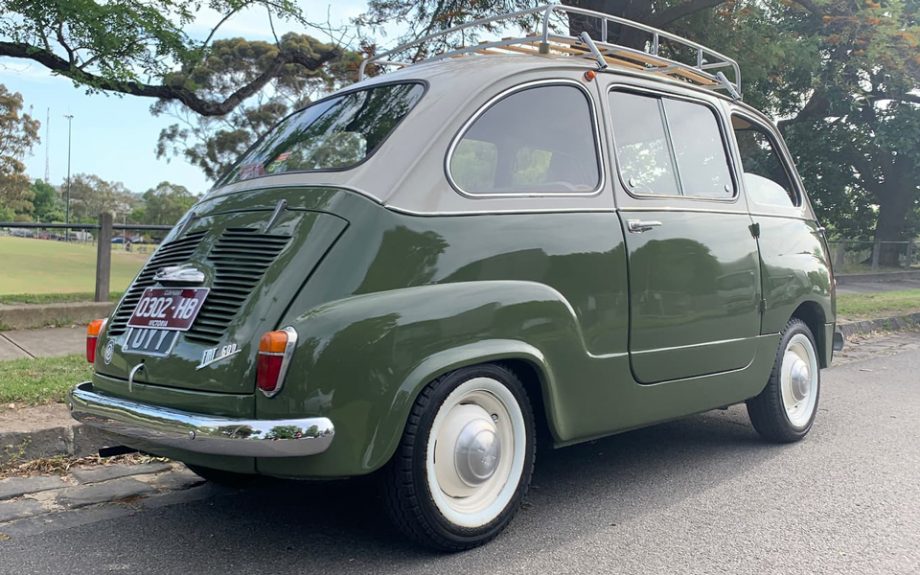 Fiat produced three variations of the 600 Multipla, with each getting a different seating configuration: it was available with 4/5 seats, 6 seats and eventually a Taxi version which rocked an individual driver’s seat. The model on sale here is claimed to be the six-seater version, although it looks as though it has a bench-style seat in the back (the six-seater variant had four individual rear seats arranged in two rows) which would mean it’s the 4/5 seater version instead.

Regardless, the rear bench can be folded down to open up the rear, allowing it gobble up whatever luggage you need for a weekend road trip. 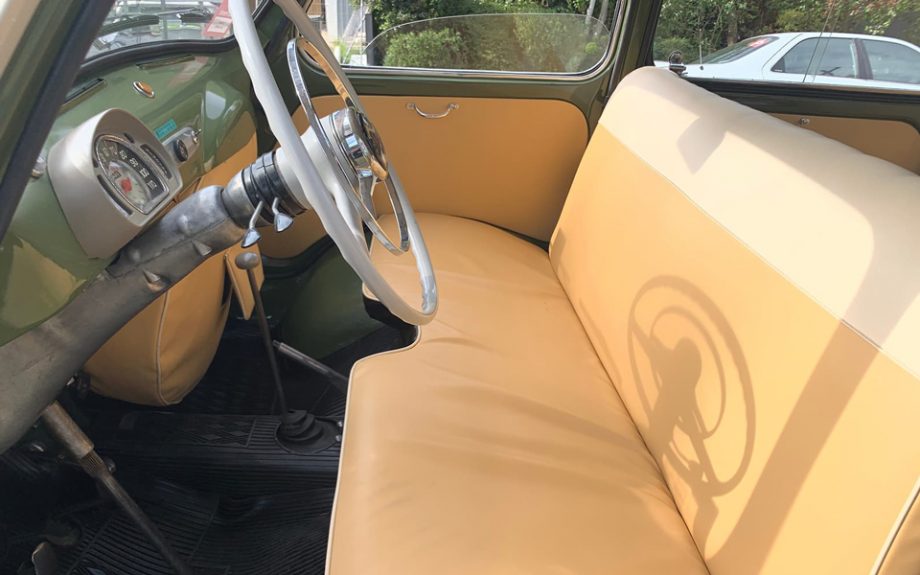 The passenger gets the spare wheel for company.

Of course, you won’t be getting to your destination in a hurry – something you’ll want to account for – as the 600 Multipla Series I (such as this) has a 633cc engine installed, with a power output of 15.8kW/21.2hp, resulting in a top speed of 90km/h (56mph). British motoring magazine The Motor recorded a 0-50mph for the Multipla of 43-seconds. Coolest car in Australia yes. Slowest car in Australia? Quite possibly. More time for onlookers to gawk in amazement, however.

The Fiat 600 Multipla is often regarded as being the first MPV, or at least the inspiration for the people movers that are common on our roads today. The bad news however is it also spawned the ‘new’ Fiat Multipla launched in 1998. The less said about that car, the better.

So, let’s focus more on this particular model for sale. It received a full restoration in 2016/17, which saw the body panels sanded down so that body panels could be fitted to a “better than factory standard”. The engine and gearbox have been rebuilt too, as the floor mat set is completely original. 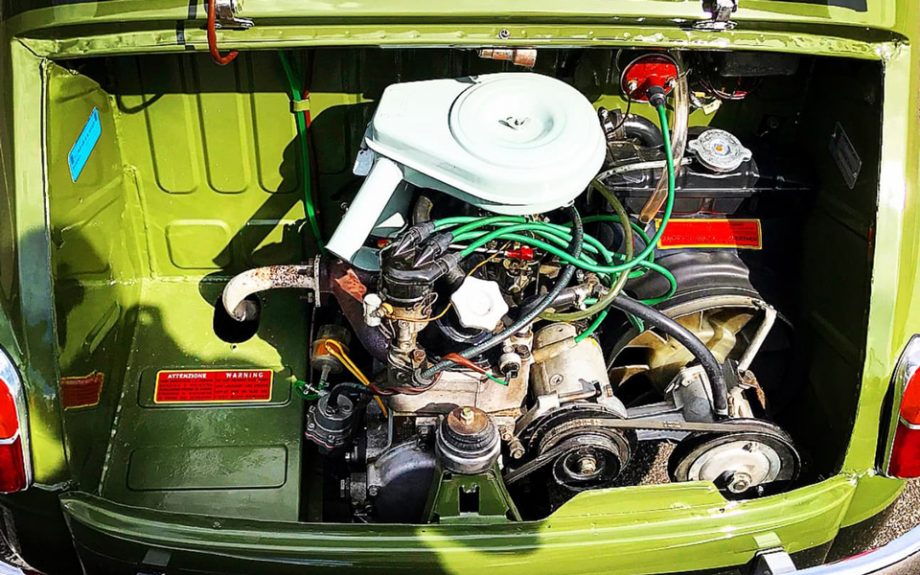 It comes supplied with the original log book it would have received when it rolled off the production line in Italy. Just under 130,000 Fiat 600 Multiplas were ever produced – although that factors in both the Series I and Series II (which received a larger engine) – but the owner of this vehicle claims the left-hand drive Series I is now “incredibly scarce and a collector’s favourite.”

It may not be the fanciest or the fastest car to ever adorn our cars section (which we admit makes its $89,500 price tag a little tough to swallow) but we’re going to stick to the fact it’s one of the coolest. Head to the Carsales page now to enquire and make an offer.