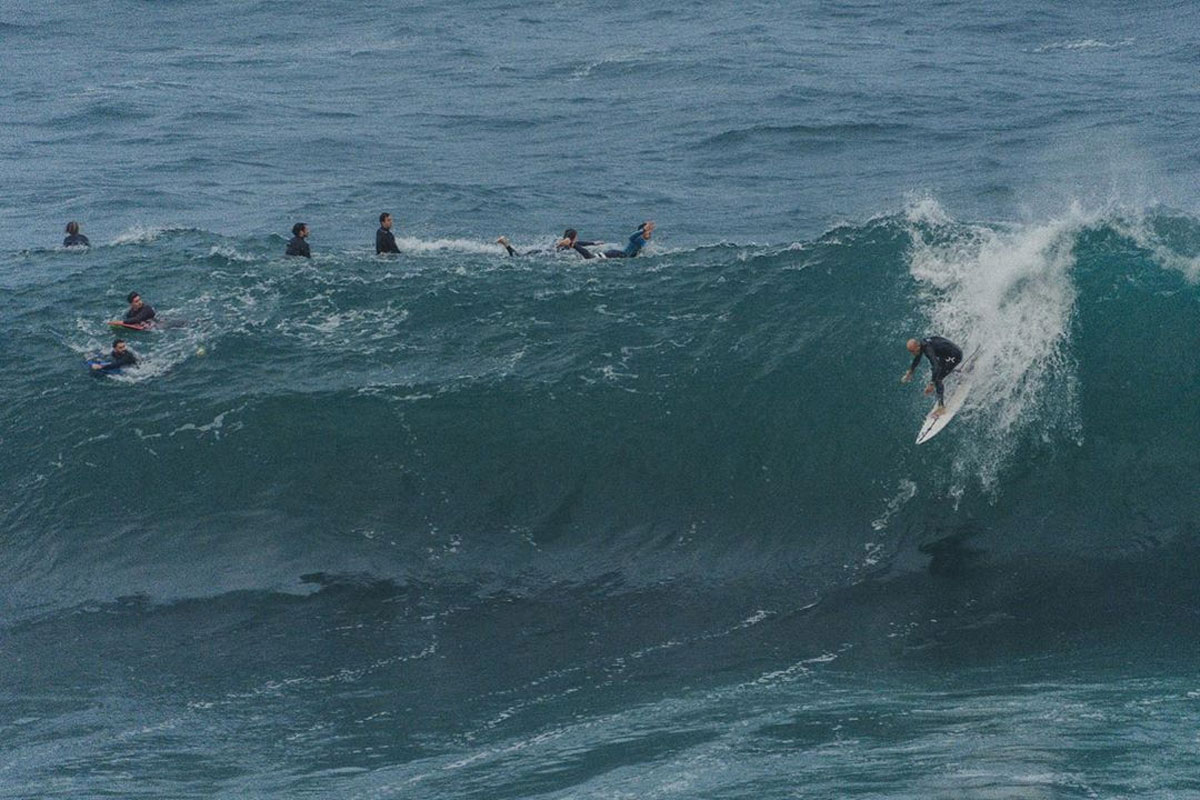 Does Kelly Slater secretly wish he was Australian? That’s the question on everyone (or at least, our) minds after the eleven-time world champ scored Sydney’s biggest swell in years.

Though 7News.com.au’s “once in a decade” prediction didn’t come true (we had a bigger, more direct swell in June 2016, to name one) the waves all along NSW have been historically – dare we say “Point Break-Esque” – big since Friday.

Kelly Slater, widely considered the greatest surfer of all time, took the chance to show off his signature timing, popping up in the right place at the right time multiple days on the trot.

On Friday Slater made headlines breaking his board at one of the heaviest spots on Sydney’s Northern Beaches.

As Channel Nine News reported on Friday, “Onlookers were quick to spot the great treading water between sets with his board snapped in two.”

“One half of the board became swept up in an oncoming wave and taken back to shore where it eventually settled in a rock pool.”

@kellyslater nailing some of the deepest takeoffs on one of the heaviest waves on the Northern Beaches. Great to see 💪🐐

The waves pumped in Bondi too.

Back to the GOAT though: Slater’s decision to stay in Australia as the world went into lockdown has been a subject of much debate, with rumour mill BeachGrit writing: “Slater has now been in Australia for three, or so, months. I’d imagine longer than anywhere he’s been concurrently over the past two decades. Does that make him Australian now?”

We’ll leave that one for you to ponder. What is not up for debate, however, is the 48-year old’s strategic thinking (and tireless froth).

We went to hang out at the cliff and we ended up watching @kellyslater and a epic session. A great atmosphere, Kelly was cheering up the local surfers (photo #2) and everyone at the cliff, myself included, went nuts after every barrel. Please check @mxmsurfphoto for the same situation from the water! Such a memorable day for everyone out there. . Please dm for the photos! . . . . . . . . . . . . #surfdaily #kellyslater #kelly #surfporn #surfphotos #tomosurfboards #surfphotography #surflife #surfline #surfmag #surfmagazine #tracks #wsl #worldsurfinsta #manlydaily #surfingnsw

Though some expressed surprise in March when Kelly hunkered down in his $2.1 million Gold Coast apartment (when he could have been in Hawaii chasing a rare run of late-season swells), with every day that passes, as places like California and Hawaii see their (wave) energy dwindle and as Australia’s East Coast comes into peak season, it becomes clear Kelly may have been right all along.

Either that or he just feels at home in Australia – something he delves into in the following video.

In any case, Kelly appears comfortable in his spiritual home, currently residing in Avalon on Sydney’s Northern Beaches, where he first bought a property in 1992.

As for the waves: they peaked this morning, and are set to continue, large-but-dwindling, until Wednesday or Thursday, from which point the conditions should become more manageable again.

Sydney surfers will have their fingers crossed the next historic storm (and the next visit from The GOAT) is not too far away.