It’s been a turbulent time in travel. From Alan Joyce teasing $19 Sydney to Melbourne flights to experts predicting air travel could become significantly more expensive, it’s hard to know what the industry is going to look like in two weeks, let alone two years.

But if there’s one thing we can trust in these times, it is that Qantas will come good with some joie de vivre.

Enter: Alan Joyce, Qantas CEO, who took to LinkedIn on Friday to share “the new normal” of flying domestically in Australia (a markedly more cheery affair than our correspondent’s, a couple of months ago).

He also did so from, arguably, the most unlikely seat.

How so? Though you might expect the Qantas head honcho to have kicked back in business or at the very least nabbed himself some aisle or at least window digs, he voluntarily submitted himself to every travellers’ worst nightmare: a middle seat. 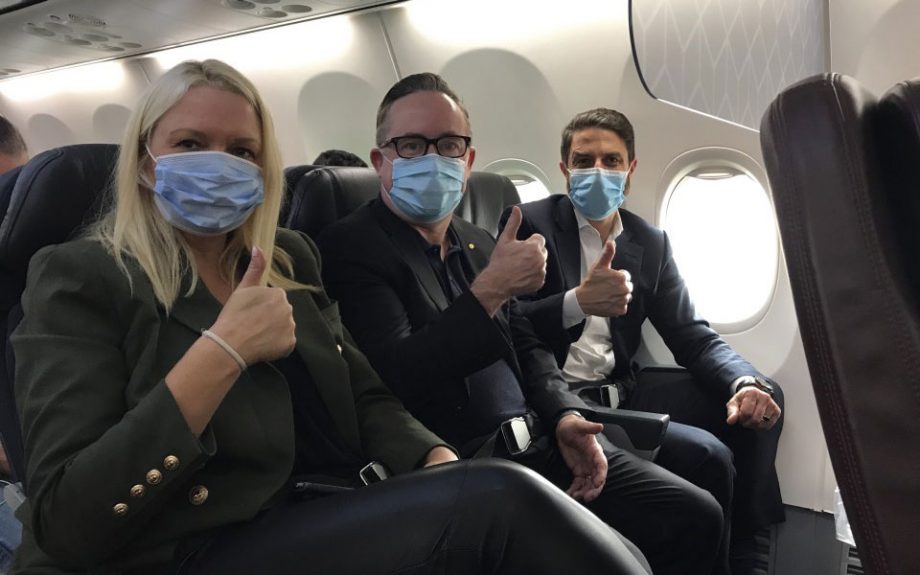 Though we were too embarrassed to ask Joyce the last time he’d flown cattle class when we interviewed him last year (amid other journalists’ serious questions) we’d imagine it’s the first time in a while Joyce has flown economy (or premium economy), especially in the middle of a row.

It was also Joyce’s first flight since March, just prior to the national shutdown.

“It was a little different to my last flight.” Joyce said. “Since then, we’ve implemented a number of additional safety measures… to help customers feel more at ease.”

“As we boarded the flight, we all used the hand sanitiser station at the gate, people scanned their own electronic boarding pass using their phones, and once on board, many passengers used the sanitising wipes we provide to wipe down their arm rests and tray tables.”

“We recommend everyone wears a mask for extra peace of mind, which might have seemed odd a few months ago but felt surprisingly normal,” Joyce went on to say.

“We’ve based all these measures on best-practice medical advice and feedback from customers but also from our experience operating repatriation flights to bring Australians back home who were standard overseas in virus hotspots,” Joyce added.

Though it’s hard to imagine the CEO of a company ever publically voicing concerns about their own organisation’s safety protocols, Joyce said he found the security measures comforting.

“One thing I find particularly reassuring is that aircraft cabins are fitted with hospital-grade HEPA air filters which remove 99.9% of bacteria and virus from the air. The air in the cabin is changed about every five minutes.”

“It’s still early days as we work to get our planes, our people and our frequent flyers back in the air – at least domestically. It will be some time yet before things feel truly ‘normal’. But there is cautious optimism that we are starting to emerge from what has been a very challenging chapter for everyone.”

Qantas has also recently opened up a bunch of routes (see details here), including bolstering the Sydney to Melbourne corridor, as well as introducing a new route to Byron Bay from Sydney (in the past this was only operated by Jetstar).