The joys of bureaucracy. 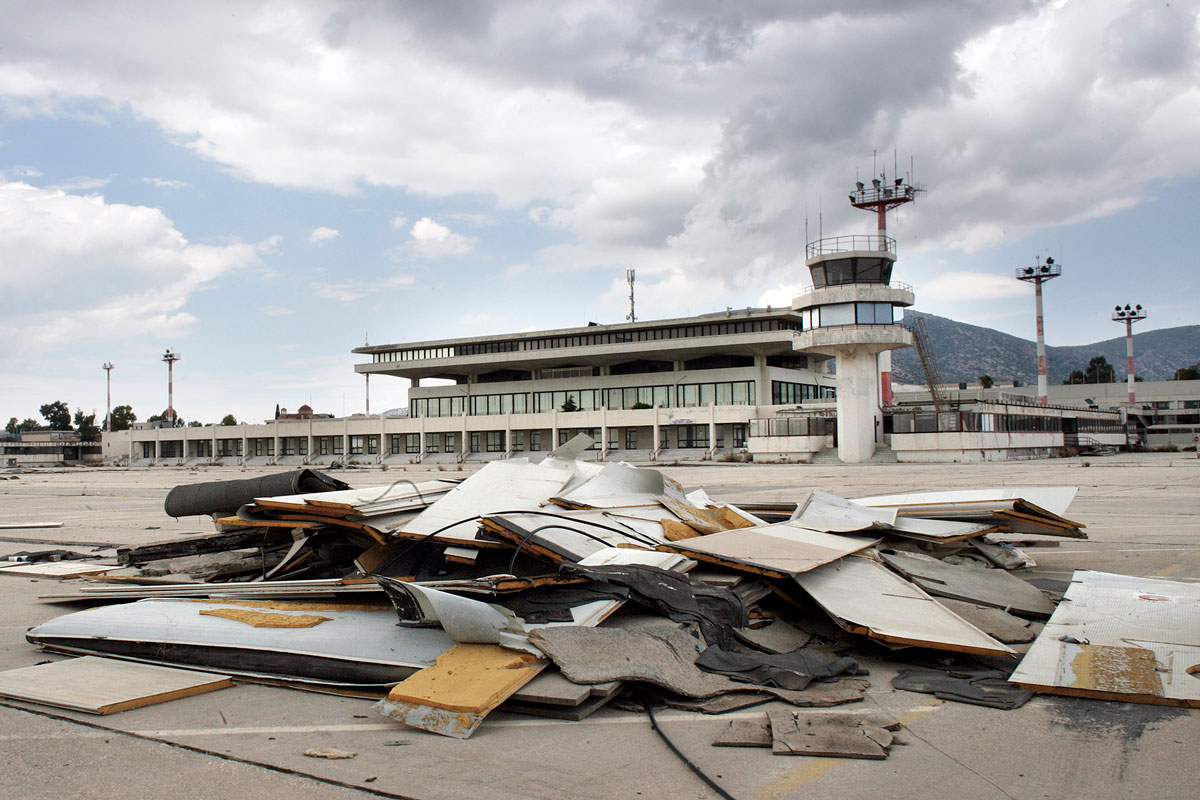 When you think of Europe you think of Old World excess. Tasteful architecture, freshly baked croissants, the soothing sound of your third gin and tonic. You get the picture. But if you take your beer glasses off for a second, you might also notice there are a lot of unfinished construction projects, particularly outside of the main tourist areas.

From Greece to Spain, the problem is widespread. It is also widely acknowledged as being a result of poor government planning and the crisis of 2008 (which it took most European countries a lot longer to dig themselves out of than, say, Australia).

Today, however, the topic of discussion is a Greek airport which, has been abandoned for some more specific reasons.

That airport is Hellenikon, and it is now a jungle of trash, broken glass, discarded record books, faded tourism posters (T.J Ekleberg eat your heart out) and torn maps.

As CNN Travel recently reported, Eleftherios Venizelos was not always Greece’s main landing pad. And as international travel tentatively resumes, and as Venizelos roars back to life, “a few kilometers to the west, another airport will remain eerily quiet – as it has for much of the last 20 years.”

“Located on the southern Athenian coast on a site roughly three times the size of Monaco, Hellenikon – which translates to ‘the Greek’ – was for decades the only international airport in Athens.”

Hellenikon, the abandoned airport complex, was originally built in the late 1930s – when Greek aviation was still in its infancy. Then, during World War II, the site was used by Nazi Germany’s Luftwaffe and became a target of Allied air raids.

“With Greece’s tourism industry rapidly expanding, Hellenikon served as the gateway for millions of people arriving from all corners of the globe to explore the country’s archaeological marvels and sun-baked beaches,” CNN Travel reports.

Why did it shut down? Unfortunately, Hellenikon was unable to serve Greece’s skyrocketing tourism needs, and was shut down on March the 30th, 2001, to make way for a more cutting edge facility.

The travesty is, although some parts of the disused complex were repurposed into venues for the Olympics, years of neglect followed and the 1,530-acre site – once envisaged as a metropolitan park – was “left to decay amid disagreements over its redevelopment and Greece’s descent into economic chaos in the wake of the 2008 financial crisis,” (CNN Travel).

In 2014 there was a glint of hope as investors signed a €915 million ($1 billion) deal to turn Hellenikon into one of Europe’s largest coastal resorts, filled with luxury hotels and apartments, as well as shopping malls, a park and a casino and entertainment complex.

The lust didn’t last, however, and things once again turned bleak: efforts to jump-start the project have repeatedly stalled amid political opposition and bureaucratic paper shuffling.

“More than four years ago, at the height of Europe’s refugee crisis, the sprawling site became an informal settlement sheltering thousands of refugees living in harrowing conditions, its abandoned terminals and Olympic facilities filled by a sea of tents,” CNN Travel reports.

That said, “Over the past year, Greece’s conservative government has pledged to speed up regulatory procedures so that the long-delayed redevelopment project can get off the ground, and some preliminary work is expected to commence in the coming weeks,” CNN Travel reported at the start of this month.

But, particularly with the major drop in tourist revenue that Greece is experiencing due to The Virus, don’t hold your breath on it being finished any time soon.