So sexy it hurts.

It’s no secret we have a soft spot for the odd Porsche. Exquisite German engineering, gorgeous looks and enough potency to guarantee you’ll need a change of pants with every journey.

However, while we’re well-versed with its traditional sportscar offerings – having tested the new Taycan in Finland and being given the keys to the entry-level 992 a couple of weeks ago – we’re not so familiar with the company’s SUV range – although we have been able to hoon around in the immensely fun Macan S.

So when we were offered to take delivery of the new Porsche Cayenne Turbo S E-Hybrid Coupé – a mouthful, granted – for a week, what did you imagine our response to be?

Not only is it always nice to indulge yourself every once in a while (we deserve it), but we were keen to find out just how well Porsche’s crossover SUV compared to its fellow German compatriots, the BMW X6 and Mercedes-GLE. On paper, it offers so much more in terms of technology and design, but that doesn’t always translate when transferred to the tarmac.

Well, without giving too much away, the Porsche Cayenne Turbo S E-Hybrid Coupé was one of the most impressive SUVs we’ve driven in years and is perfectly suited to life in the Eastern Suburbs. 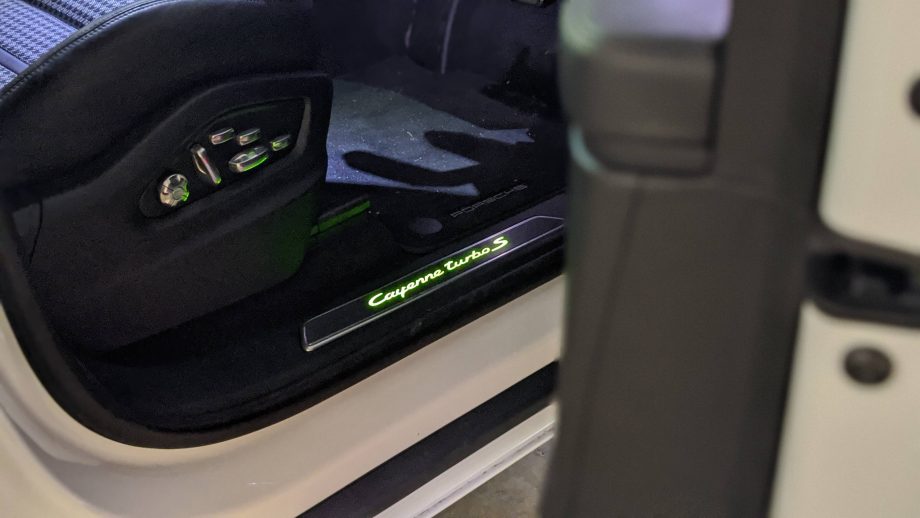 You’ll notice the seat can be electronically moved every which way, including up.

Despite grinning like a Cheshire Cat just looking at the exterior of the Porsche, we couldn’t bear to wait a second longer and had to jump into the driver’s seat. As soon as you do open the door, illuminated door strips provide a welcome ray of light, which are particularly effective in the evening. The additional Turbo S branding reminds you that yes, you are more entitled than the rest of the population. 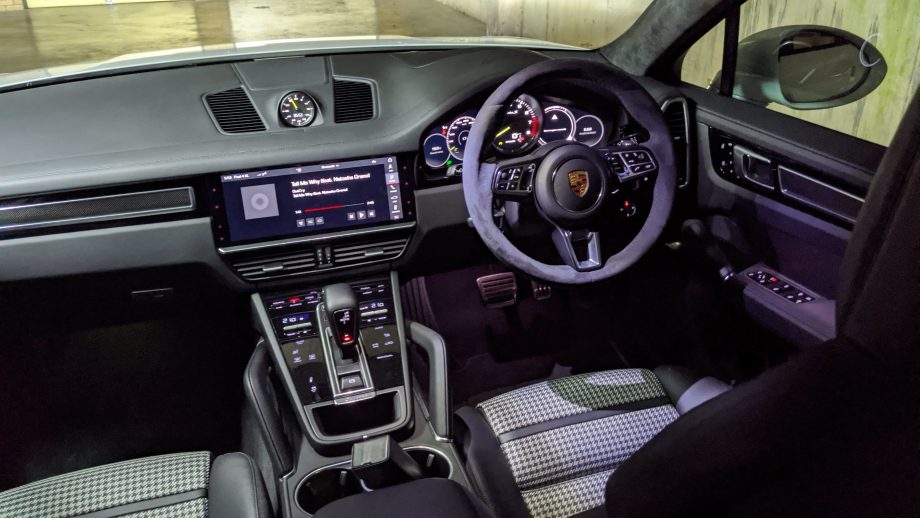 Step inside and you will immediately understand why we were so hesitant to hand the key back to Porsche. What a cockpit. It exudes luxury and we guarantee you will never get bored of positioning yourself behind the Alcantara-clad steering wheel.

It’s an incredibly comfortable and smile-inducing place to find yourself, made even better by the optional Lightweight Sports Package – yours for $20,000 – which sees the seats upholstered in half leather, half diamond-pattern fabric, that steering wheel with matching Alcantara lining on the roof, and the 22-inch GT Design alloy wheels.

It’s a big space for sure (it’s a big car after all), but Porsche has done well to make it feel intimate at the same time and not like you’re sitting in a pew at church. There’s no echo to be heard around the cabin, that’s for sure. 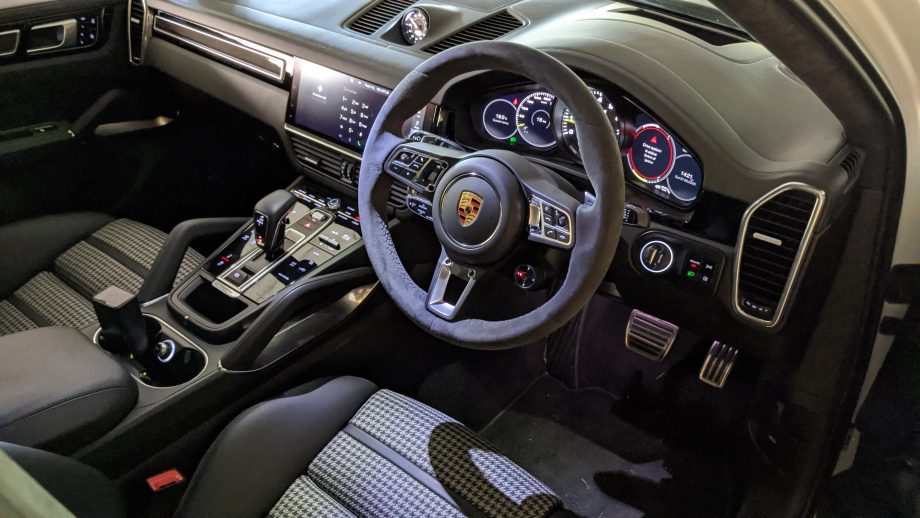 The Jesus bars are a considered thought for nervous passengers, we assume.

Porsche has carried the infotainment system found in the 992 911 over to this Cayenne Coupé, which is no bad thing at all. It’s intuitive, has a wealth of genuinely useful features and presents information in a clear, easy-to-read fashion. Some screens on other cars can fall foul to being illegible, or unresponsive, but we’re happy to report that Porsche’s system succumbs to no such issue. 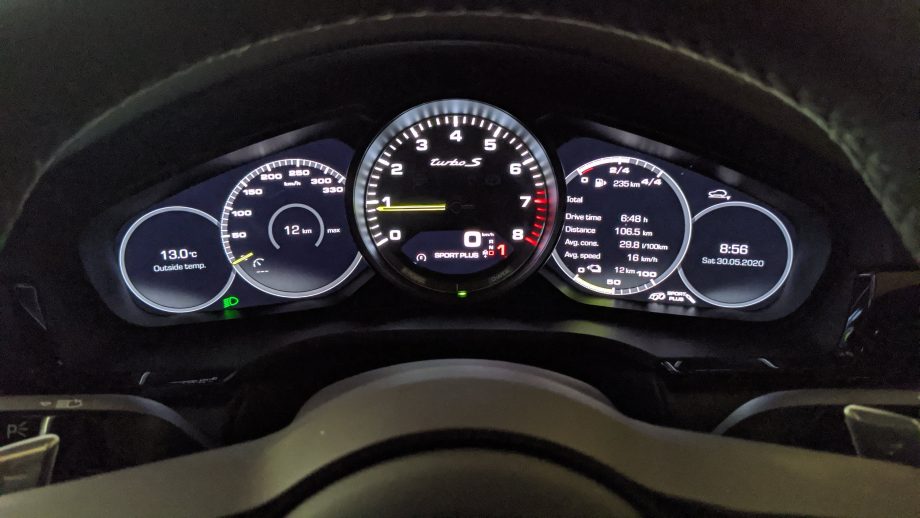 Porsche hasn’t gone full digital, however, as it has with its forthcoming all-electric Taycan. You’re still presented with an analogue rev counter, which we were more than eager to get into the red zone on several occasions. If you find yourself to be the owner of one, you’ll want to do the same. You get a satisfying pop from the exhaust that will never fail to make you laugh.

With seatbelt on, mirrors adjusted and Smooth 95.3 tuned into the radio, it was time to hit the Eastern Suburbs tour. First stop, Bondi Beach. We’re keen amateur surfers, so what better way to transport our boards to the waves than in the Cayenne E-Hybrid. We did have to put the rear seat down to fit them in, but they were treated to a luxurious cradling of soft fabric and leather. Only the best for our babies. 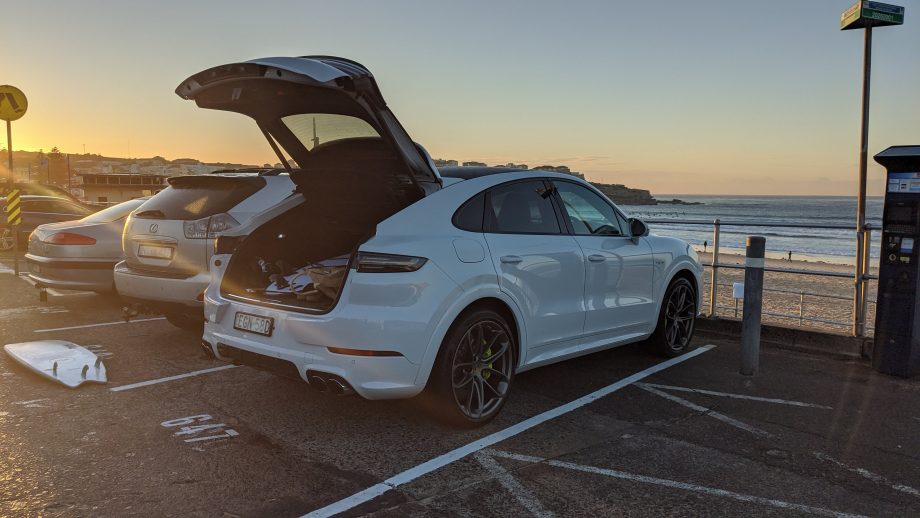 Name a better courier for boards in Bondi, we’ll wait.

We may have gone home with a decent chunk of Bondi’s sand on board, but it posed no such issue for our Cayenne. After all, that’s exactly what SUVs are made for, to get down and dirty across all terrains. We certainly weren’t going to be one of those owners who purely wanted a large and in charge vehicle to show off our status. 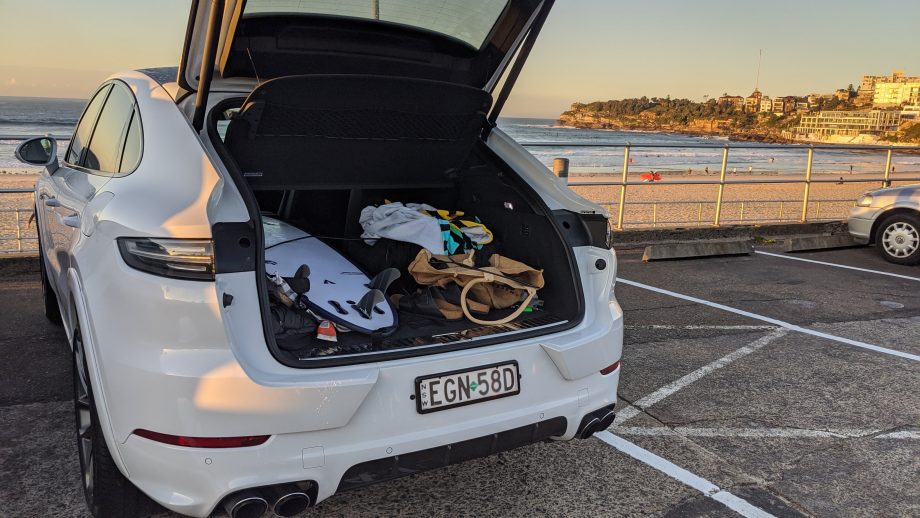 Despite being the headline feature of this particular Porsche, the Coupé body style, we imagine, will the one thing that could divide potential buyers. We’re pretty sure we’d all be in agreement that it looks cool, but the sweeping rear end does cut off some of the vertical height you would normally find on a non-coupé variant.

It retains the same width, so shouldn’t pose many problems for the Average Entitled Joe who wants to load up his golf clubs but something worth thinking about when taking a browse around the dealership. And for those with friends in equally high places, you’ll be pleased to know you’ll be able to fit your taller peers in the back without any issue, as headroom is plentiful. 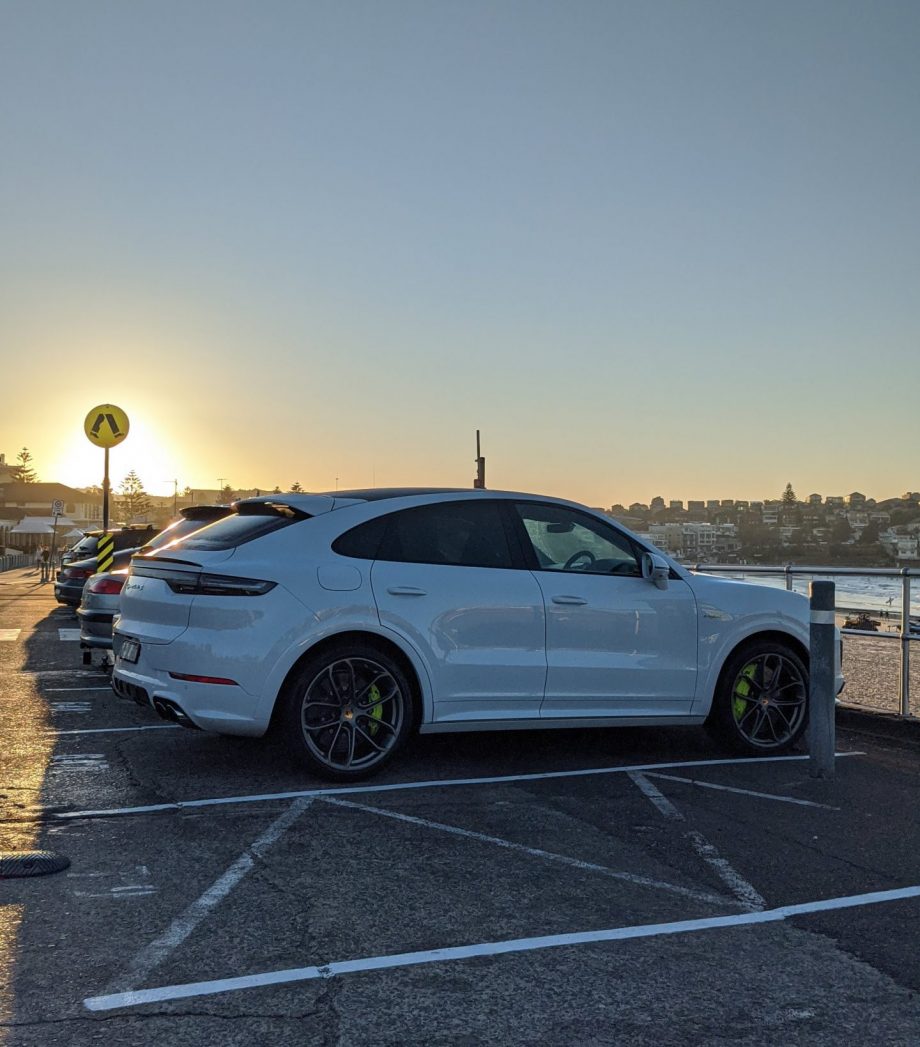 A sight for sore eyes at 7am

Moving around the side of the car and there’s no denying the fact that Porsche has absolutely nailed it when it comes to styling. The BMW and Mercedes-Benz interpretations of the crossover-SUV can look rather brutal and brash, but Porsche has essentially taken its iconic and “if it ain’t broke, don’t fix it” attitude to design in the 911, and stuck it on a larger set of wheels

For us, it most definitely works. Yes, it’s an imposing vehicle, but the softer curves and low roofline make it far less intimidating. We doubt Porsche sketched this design straight away, and there probably would have been a few more masculine drawings to come out of the design studio. We think the final result is spot on. 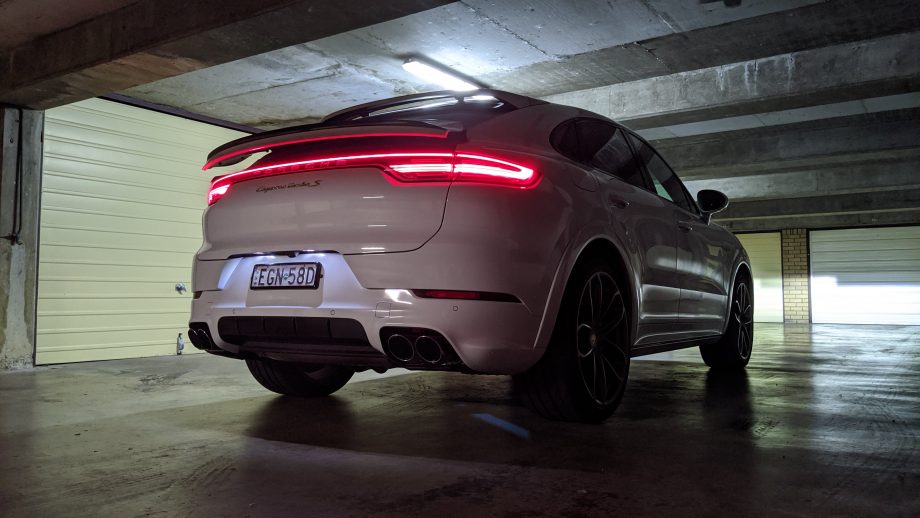 Even has a rear spoiler

We couldn’t review a Porsche and not talk about its performance now, could we? This may be an SUV, but it bears the Porsche badge, and if there’s one thing Stuttgart manufacturer knows, it’s speed. The Cayenne Turbo S E-Hybrid has it by the bucketload.

Under the hood you’ll be graced by a 4.0-litre V8 Biturbo, with an electric motor, naturally. The addition of electric power means as soon as you poot your foot on the gas, the engine springs into life with not a hint of lag. Couple that with the beast of a petrol-powered unit and you’ll be sent back so far into your seat you’ll have to name your next child Fabrice.

All that power mated to a taller body can mean you’ll be susceptible to some nasty body roll. Luckily, Porsche has just the solution in the form of an integrated rear spoiler, that can be deployed when you put the Cayenne into Sports mode. Once up, the spoiler helps to channel air flowing over the vehicle, pushing the rear end down and cementing you to the tarmac.

It means you can feel in complete control of the car at all times (and that you can be a little right-foot happy if space allows). 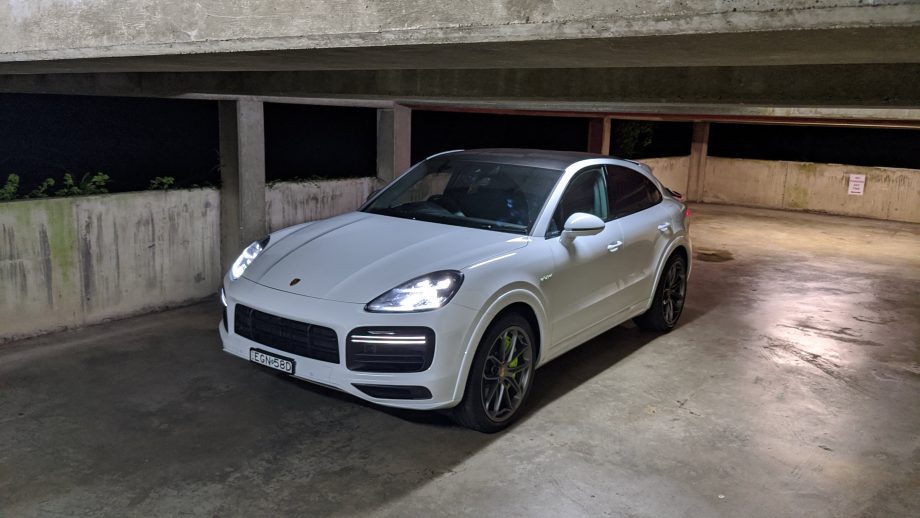 While it may be all too easy to stare aimlessly at the Cayenne Coupé’s rear end and side profile, it’s front may not be to everyone’s liking. It’s not ugly by any means, and it’s unmistakably Porsche, but we’d argue there are better-looking SUVs on the road right now…from the front at least. But considering most other road users are going to be looking at your behind, we’re not too fussed.

So what else can this wonderous Porsche do? It’s a dab hand at parallel parking, a trait we found out upon returning to Bondi Beach for our second surf of the day. Our usual parking spot wasn’t available but fret not, for this Cayenne was specced with Porsche’s rear-axle steering, an optional extra at $4,300. 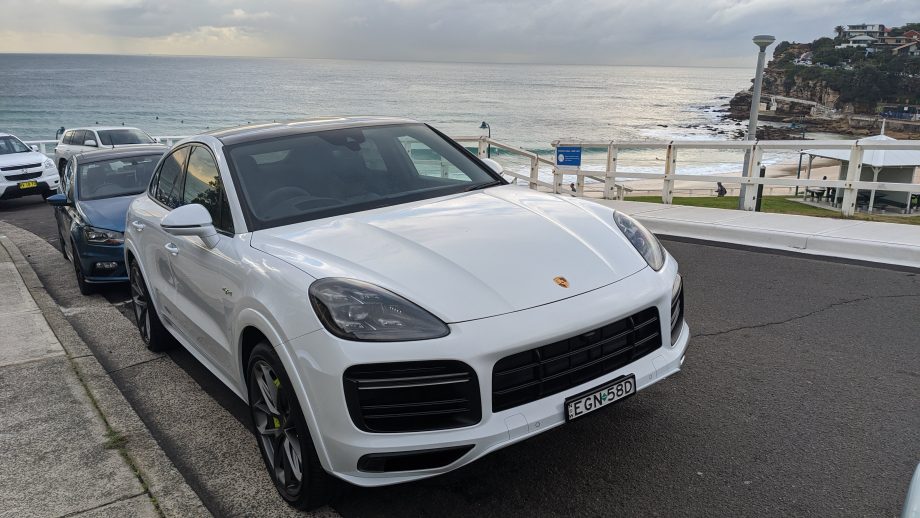 Looks good at Bondi and Bronte

How does it work? It allows the rear wheels to turn in the opposite direction to those at the front at low speeds, making parking – and navigating the tight corners of the Bondi Westfield car park – an absolute cinch, and makes them turn in the same direction as the front wheels at higher speeds. This adds an extra level of stability, which when combined with that rear spoiler only serves to make you feel safer. 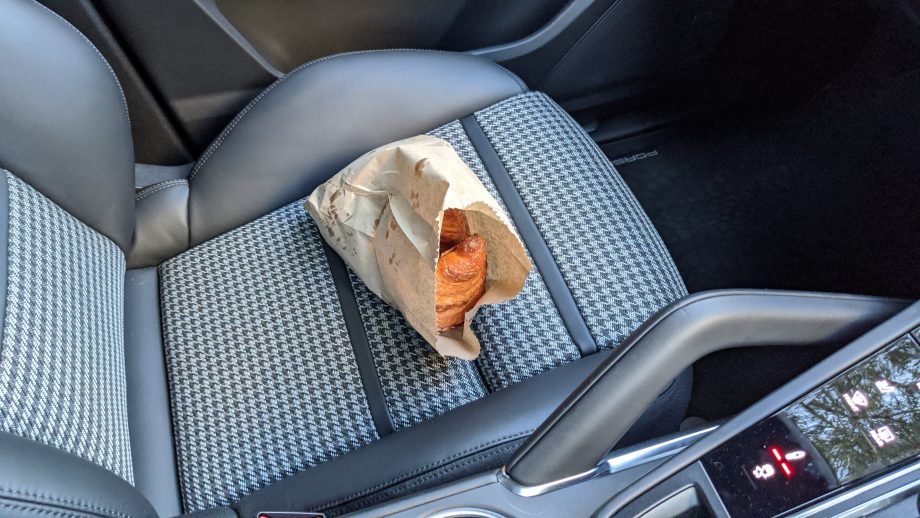 Following a successful afternoon surfing session, it was time (for us) to refuel at Iggy’s Bread in Bronte, a mainstay on any well-informed Eastern Suburbs tour. We let our croissants ride shotgun, as long as they promised to not spill their button the houndstooth cloth. They obeyed. 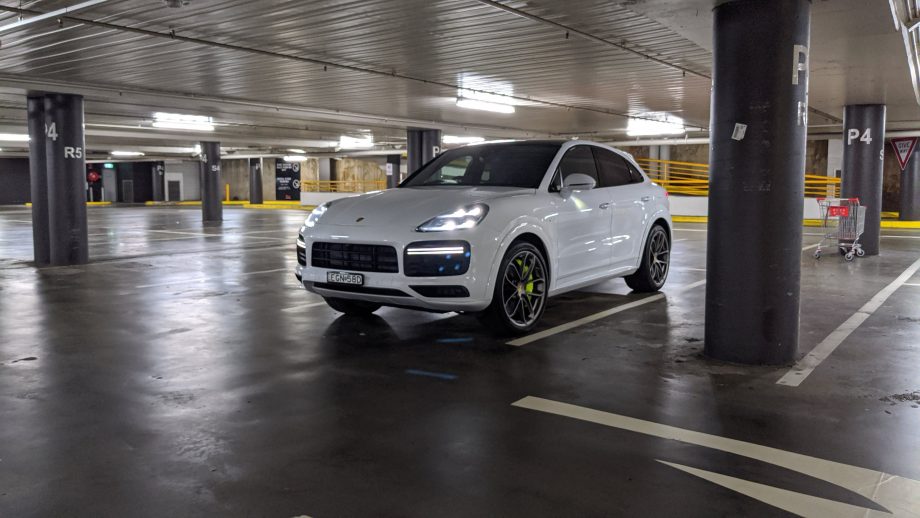 Then Westfield. No rims were harmed in the making of this.

Remember that snap we mentioned earlier that fires from the exhaust? What kind of publication would we be if we didn’t allow you, the reader, to hear it in all its glory? The piece de resistance of the Cayenne Turbo S E-Hybrid Coupé is the different modes it offers the driver.

You can choose for silene and serene fully-electric if you want. However, make sure you’re in space when you press the gas pedal, a) because it’ll throw you forward quickly and b) you want to make sure it’s actually on. It’s that quiet you have no idea.

But we know you’ll want to switch to Sports+ mode before you leave the dealership. How do we know? Because you would’ve listened to the soundtrack of this video first.

Music to any the ears of anyone who appreciates cars.

So, to summarise, would we buy a Porsche Cayenne Turbo S E-Hybrid? If we could afford to do so, yes absolutely. For us, it offers the perfect package for an SUV: interior space and power, but without the huge size of some other road-going behemoths.

It epitomises luxury from top to bottom and despite its high price tag, for the sheer thrills it provides and for the size of the smile on our face the entire week we had it, we think it’s worth every cent.