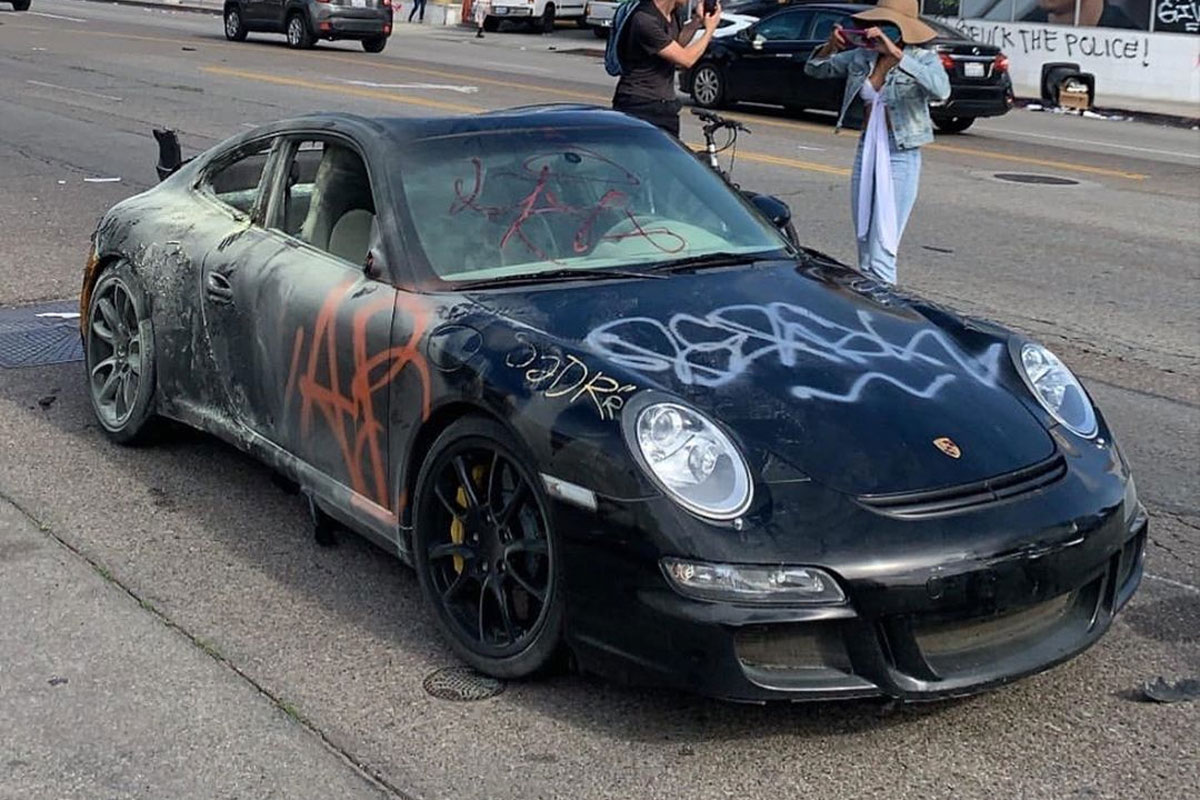 I’m incredibly conflicted. On the one hand, I can’t possibly understand the grief and fury that African-Americans are feeling right now. After such institutional failure, I can see why many people feel as if they have no choice to express themselves through the sort of civil disobedience and rioting that’s been happening across America. The lawlessness of police has precipitated the lawlessness of the people.

I can also see how seeing people driving around in German performance cars when you’re facing daily racism and struggling to survive during a pandemic could make your blood boil.

At the same time, it’s hard not to look at the following photo and not feel a pang of dismay.

Sometimes described as “the ultimate 911”, the third-generation GT3RS – based on the 997, the sixth-generation 911 – is a work of art. Belting out 370 kW and 469 Nm of torque from a beefy 4.0L flat-six, with an aggressive, distinctive body kit and ludicrous rear wing, this Stuttgart stunner would have turned heads up and down Rodeo Drive.

Now though, this performance champ is turning heads for all the wrong reasons. Covered in graffiti, dents and missing most of its windows, this GT3RS is almost as damaged as race relations in the US.

I just want to know how they managed to rip the damn spoiler off… Hopefully it finds a home on the back of a Honda Civic or something.

Some in the comments section reckon the owner parked the Porsche on the street deliberately hoping it would attract the attention of rioters so that they could collect an insurance payout. Others aren’t so sure it’s a genuine GT3RS, considering only around 4,000 made it state-side and it’s missing a few key GT3RS features… In any case, it’s sad that such a beautiful car was damaged like this.

Luxury cars and auto dealerships have been victims of looting during the recent riots in the US. On this same Instagram account there’s footage of where a Dodge dealership was broken into and over fifty cars were nicked, including a bunch of Hellcats, and where rioters broke into a Mercedes dealership just to smash some windows.

Some argue looters and opportunists are distracting from the message of genuine protestors. But, on the other hand: if sports cars getting torched is what it takes to grab people’s attention, so be it.

Our hot take? Buy this Porsche and restore it to its former glory. You’ll get a hell of a deal for one hell of a car.

(And then donate some the money you’ve saved on the car to the Minnesota Freedom Fund.)