Making a fashion statement can also mean making a political statement. Like how wearing a Che Guevara t-shirt you bought for a few thousand dong on a family holiday to Vietnam announces to the world that you don’t really understand communism, or wearing EarPods lets people know you’re a talker walker.

But there’s one fashion item that, in Australian eyes, instantly screams ‘finance bro’. And that’s the gilet.

Gilets, puffer vests, jerkins, body warmers… Whatever you want to call them, they’re known in the popular consciousness as an essential part of the ‘Young Liberal uniform’, alongside RM Williams boots and a shit-eating grin.

But we here at DMARGE think it’s an entirely undeserved reputation. Just because Conor McGregor’s a bit of a dick doesn’t make the Rolexes he wears any less cool. In the same way, gilets are an incredibly versatile and functional piece that’s worth adding to your wardrobe regardless of their political cache.

“They’re incredibly versatile and can be worn a variety of ways… With a shirt and tie, with your favourite denim jeans, even to and from the gym.”

“Having the freedom of having your arms free is the ultimate blokey style statement, too. It’s the urban equivalent of cutting the sleeves off a flannie so you can chop wood easier.” 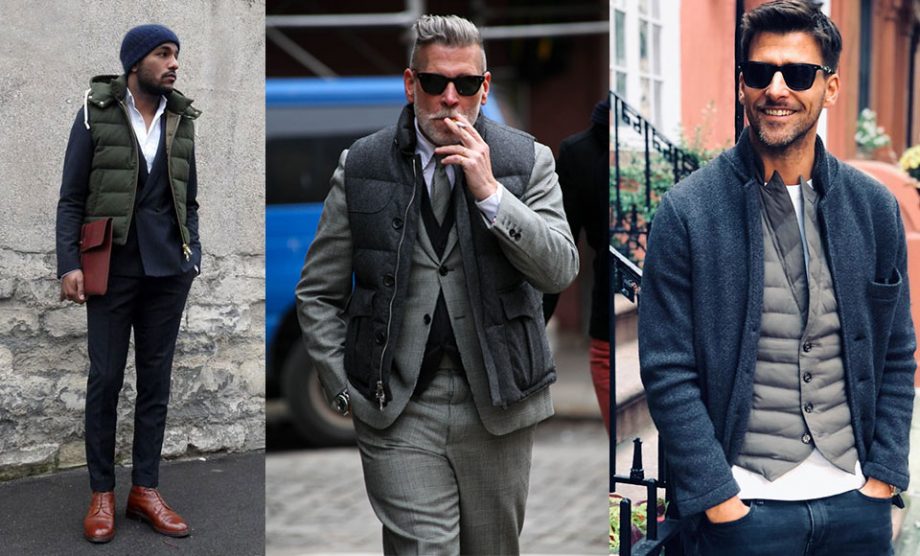 Three different ways to wear a gilet without looking like a muppet.

“I’ve even lost a few on domestic flights because they make great lower back support!” he joked.

Maybe part of the reason they’ve got such a wanker reputation is because they’re so popular in Europe – an essential part of Italian or French chic. In a classically Australian tall poppy syndrome sort of way, gilets are scorned as being high-falutin’.

The other issue with gilets is that many men who wear them don’t wear them properly, like the archetypal breed of Wall Street bro so thoroughly catalogued on Instagram.

“It can end up looking like dad garb – like a dad cheering on his daughter at netball,” Lack relates.

“You need to be careful when styling a gilet that you keep things restrained. Pair a gilet with a decent merino knit and classic white sneakers for a ‘sports luxe’ look.”

Also important: avoid wearing them with just a short-sleeve t-shirt, or calling them ‘puffer vests’. And don’t dress like Kanye.

“I hate that term! Calling them ‘puffer vests’ is probably why they have such an image problem,” Lack postulates.

There’s plenty of good gilets to be found at all price points too, like a classic Moncler Logo Patch number for $1,100 or UNIQLO’s Ultra Light Down Vest for $80.

As winter fades into spring, a gilet is a practical fashion accessory that when worn correctly looks classy yet approachable. There’s never been a better time to resuscitate the humble gilet’s battered public image and reincorporate them back into your rotation. Check out MR PORTER’s extensive collection if you need some inspiration.