Australia’s Rarest Ford ‘Supercar’ Goes Up For Auction In Queensland 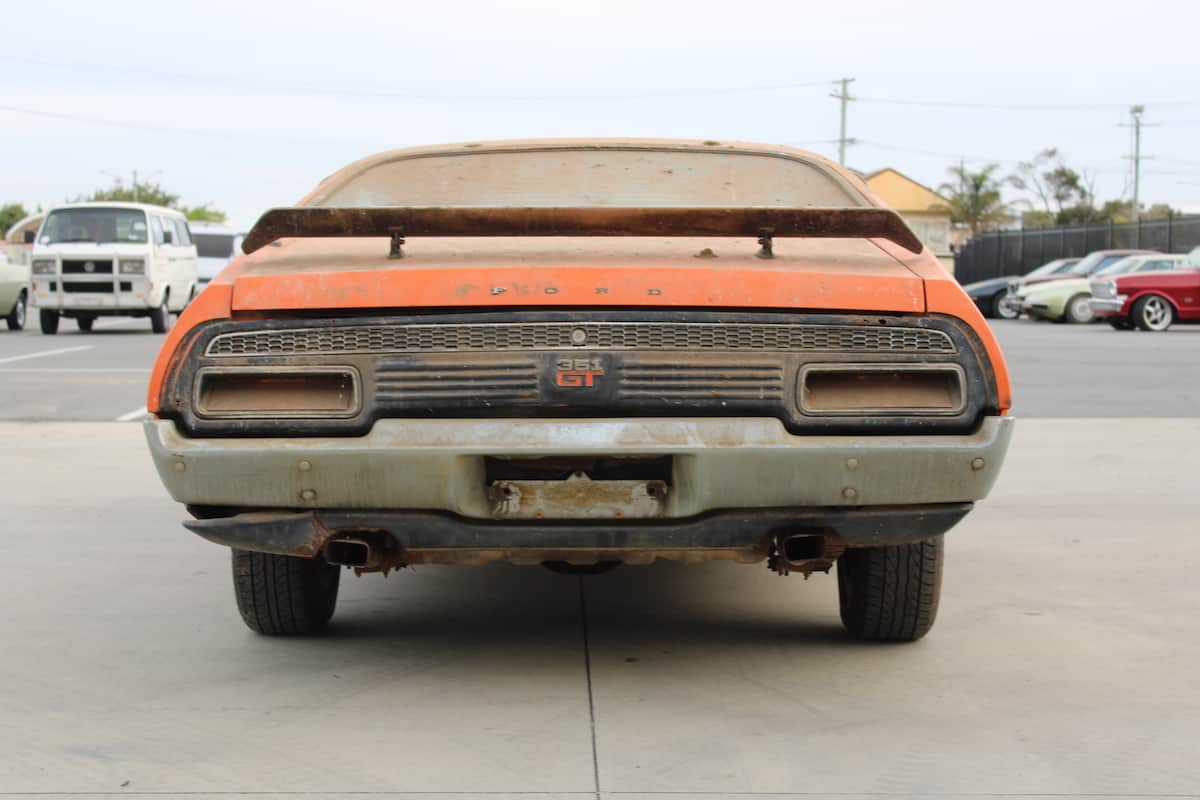 Holden vs Ford is one of the greatest automotive rivalries of all time. With the Holden brand facing discontinuation by 2021, Ford focusing on SUVs and utes instead of cars, and both brands having wrapped up local manufacturing in Australia long ago, it feels like the glory days of Australian motoring have passed us by.

Thankfully, there are still classic Australian cars bumping around that remind us of those better, more exciting times. Cars are like rolling museums: petrol-powered time capsules that let us experience the past simply through driving them. Getting behind the wheel of a classic Aussie vehicle is an experience any car nut worth their salt would jump at.

Even better than simply driving a classic car is being able to own and restore one. Being personally responsible for saving a piece of Australian history – one that’s fast as hell to boot – we can think of nothing better.

Enter this 1973 Ford Falcon XA GT Hard Top RPO 83 Manual Coupe. This very rare one-owner Blue Oval masterpiece is being auctioned after 32 years parked in a shed. And you can tell, because it’s absolutely caked in grime. 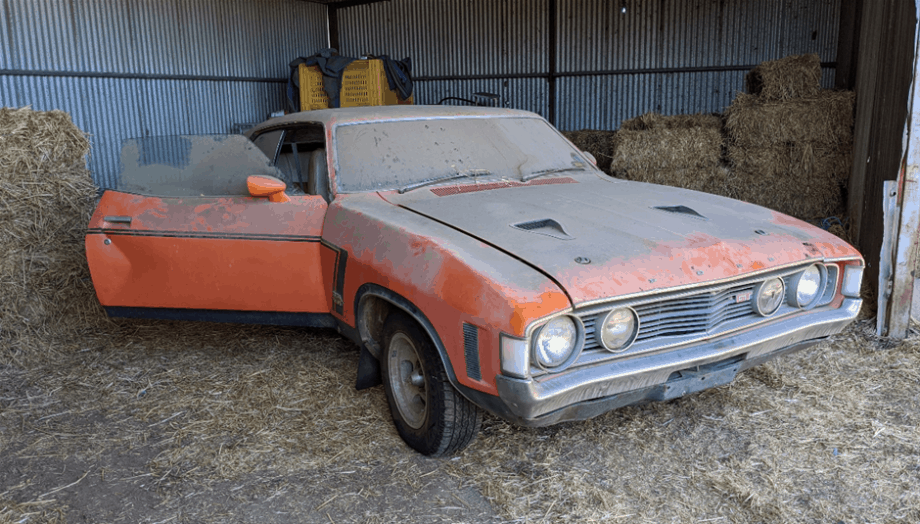 There’s a car underneath all that filth! Image: Grays Online

Known by enthusiasts as ‘The Chicken Coupe’ (so-named because the owner had wrapped chicken wire around the car during its long sleep in the barn to prevent it from getting damaged by animals), this car is the stuff of legend. Falcon XA GTs are already pretty rare and desirable beasts, but this one is particularly unique.

Back in the 70s, Ford had planned to release the hotly-anticipated GT HO Phase 4 Supercar, until a government ban based on a rising road toll and the ‘supercar scare’ of 1974 curtailed their plans. Ford had stockpiled racing parts for the GT HO, so they built 120 XA GT hardtops with the option code of RPO 83 (Regular Production Option), effectively building the supercar in secret. This is one of those rare RPO 83s.

The ‘Chicken Coupe’ is one of only two RPO 83 hardtop examples with a factory ‘MacRobertson’s Old Gold’ paint job: a rich orange hue that references Cadbury’s Australian dark chocolate brand of the same name. 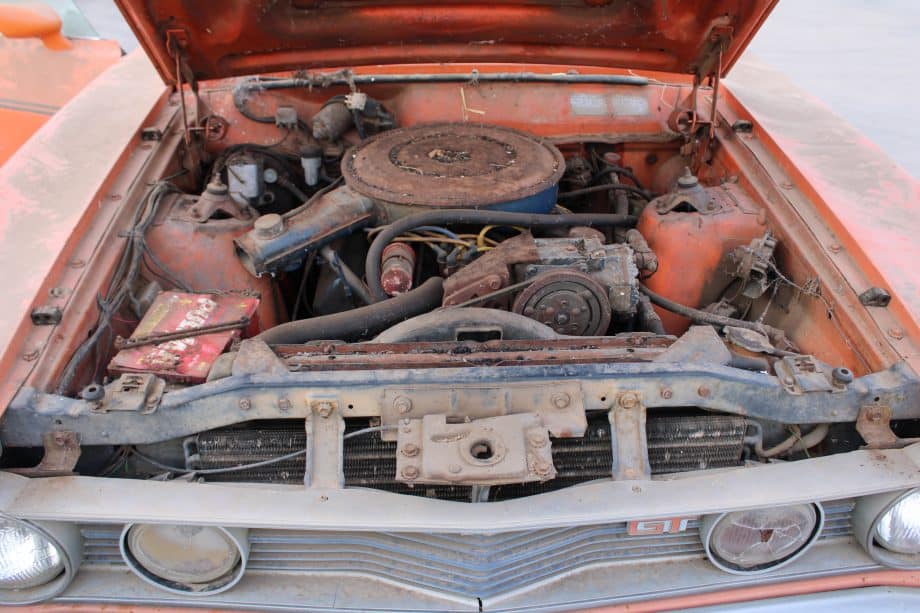 Under the bonnet is a huge Australian-made version of the classic 351 Cleveland, a mighty 5.8L V8 good for 300hp (224kW if you’re a 21st century Aussie). The RPO 83 package adds a Holley 780 carburetor, 2.25-inch exhaust headers and a clutch slave cylinder hydraulic pipe heat shield for added performance.

The car hasn’t been driven since the late 80s so everything probably needs a good check-up. The engine’s all original, however, which adds to its vintage bona fides. One advantage of these big American-derived V8s is that parts are still made for them and easy to find. The body panels and interior of this old Ford might be another story, however.

Anyone opening the doors of this barn-find beauty will be in for a rude shock, and probably quite the assault on your olfactory system: the chicken wire might have kept the birds off the car but it clearly didn’t stop the rats, because the interior of this Falcon supercar is a goddamn mess. 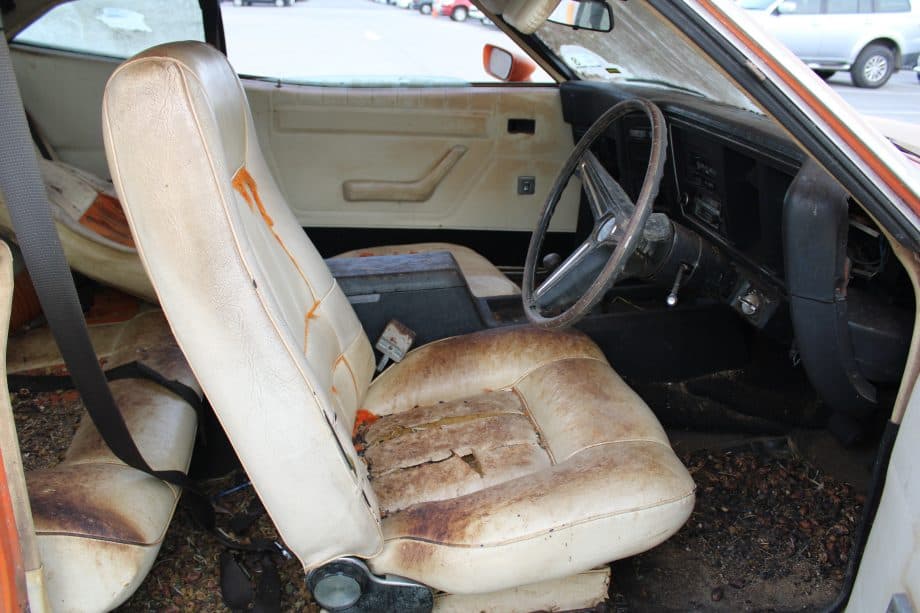 You can smell this picture. Image: Grays Online

That said, if you got a hazmat team in there and disinfected the thing, you’d end up with a pretty nice car. Remarkably, the dash isn’t cracked at all – which is common among vintage cars thanks to the UV intensity of the Australian sun. One very 70s dealer option is the bright orange cloth inserts in the seats, which you’d have to restore if you wanted to do the car justice.

“This car is as Australian as it gets,” Grays Online Classic Car Specialist Rian Gaffy says.

“From its accidental birth after the supercar ban to its decades in a shed surrounded by chicken wire to its colour scheme that honours a local chocolate company… We’re very proud and excited to offer it for auction.”

The ‘Chicken Coupe’ is part of the Grays July Classic Car Auction, with bidding commencing at 5pm on Friday July 24th. The last owner paid only $7,000 for it, but prices are (apparently) likely to well exceed that figure.

For your chance to restore an Aussie legend (and to become one yourself), head to Grays Online and get ready to bid.