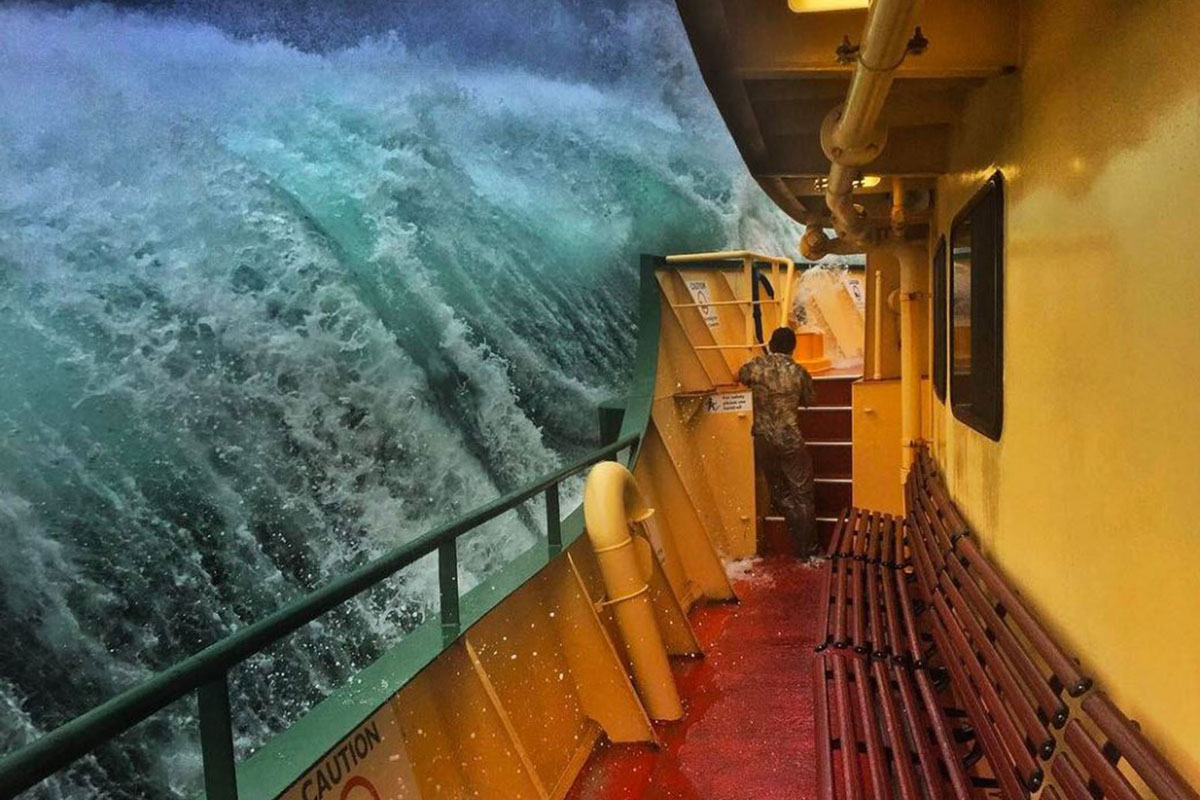 Australia has been through a lot this year. Fires, floods, respiratory diseases – you name it, it’s happened. But incredible footage, released yesterday, of the iconic Manly Ferry making its way back to Manly from Circular Quay, on a day where waves of up to 10 metres were recorded lashing Sydney’s coastline, suggests Australians have not yet lost the will to work.

Posted to Instagram by 9News, the clip shows the Manly Ferry battling between the heads (the five minute interval of the 35-minute commute where the ferry is exposed to ocean swell). 9News captioned the video: “Rough Ride: Ferry services in Sydney between Manly and Circular Quay have been suspended due to big swell.”

The ferry being on its way back to Manly would suggest it had already dropped its Northern Beaches load off in the city.

When I go to Deadman’s this morning, it was still dark with only one guy in the water. That surfer was Ollie Dousset, a bloke that trains harder and goes harder than anyone i know. The thing about Ollie, he’s an amputee and surfs with a prosthetic and man he charges! Imagine, climbing down the cliffs, running across the rock ledge in the dark by yourself… with one leg. If you zoom in on this one, you’ll see Ollie taking off in the virtual dark (so dark I was shooting with my 50mm f/1.5) out solo. You legend Ollie!! @olliedousset

All this while surfers, just around the corner, took on life-defying waves at a spot named ‘Deadmans.’

Beyond proving some Sydneysiders will (apparently) brave any conditions to keep the Viking mentality of presenteeism alive, this video is also symbolic of the state’s new approach to The Pandemic which, as NSW premier Gladys Berejiklian told radio station Nova 96.9 this morning, for the time being involves keeping the economy running, even as confirmed cases rise in Victoria.

WATCH: Big swell is pummelling the NSW coastline, prompting a Hazardous Surf Warning from the Bureau of Meteorology – but not everybody is heeding the advice. 🌊 #9News at 6.00pm

The plan, for now, premier Berejiklian said, is on finding a COVID safe way to live for the next “one to two years,” rather than shutting down every time there is a new outbreak.

The responses to the video also suggest some Australians are still in good spirits: “yes please!” one wrote. “That would be so much fun with a bunch of mates and a few beers!”

“Wow. What a scary commute that would be.”

“Most Fun People Have Had Since Covid…And They close it down…Boooo,” commented another.