There are lots of milestones boys need to master to become men. Tying a tie, shaving, backing in a trailer and being able to cook a steak properly are all bullet points on quite a long list.

Because the handshake is such a part of day-to-day life, especially for men, it’s been a real challenge adjusting to the new restrictions and courtesies that are now necessary thanks to The Bat Kiss.

How often in the last few months have you gone to hug someone or shake hands and realised you can’t do that any more? Do you do that awkward elbow tap thing? What if someone offers you their hand first: do you refuse it and make a big deal out of it, or do you just bite the bullet and shake hands like normal?

This dilemma is playing out every day in all sorts of workplaces – even on the race track, as a Formula 1 photo taken yesterday reveals. 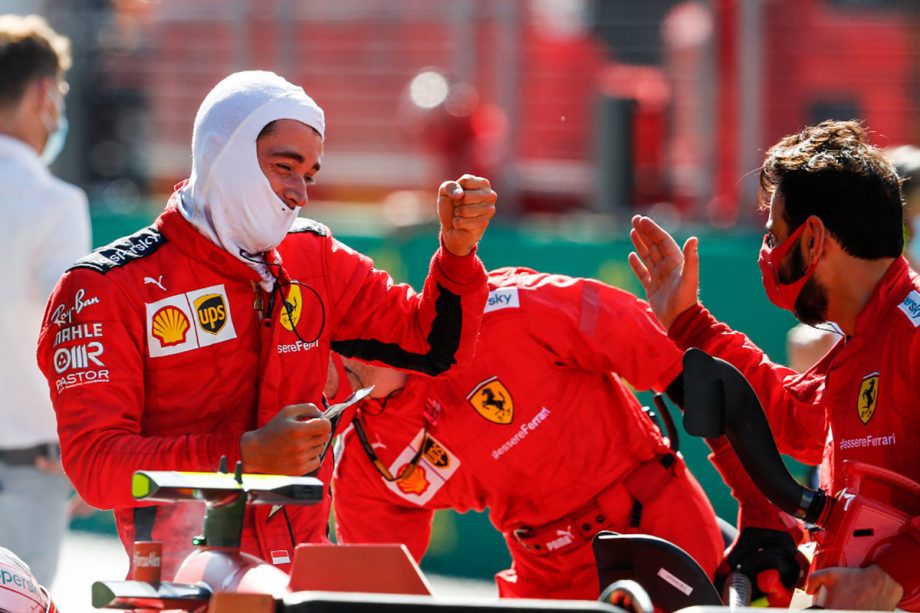 This painful interaction, captured during the Austrian Grand Prix last night between driver Charles Leclerc and his Ferrari pit crew, is awkward for three reasons.

Lastly, they’ve both hesitated, realising they can’t really do any of the above options because of social distancing.

Of course: awkward handshakes are by no means a new phenomenon: just check out the double thumbs up into failed handshake into fist-bump attempt into coordinated nose wipe of this pair of pro gamers at a tournament in 2015.

While Leclerc’s moment is nowhere near as bad as the pro gamers’ sorry attempt at a handshake, it is evidence that the trend, given the new ‘social distancing’ demands, has spread to the point where it is affecting even the most – typically – socially adept individuals.

Leclerc can be forgiven for wanting to celebrate, the 22-year-old Monégasque having cinched 2nd place at the 2020 season opener with some spectacular driving. F1’s been particularly stringent about social distancing – it’s easier to stick to than most sports because competitors aren’t physically contacting each other (although you do see a bit of contact between cars). It’s been a challenge off the track, however.

Leclerc’s fellow Ferrari driver Sebastian Vettel was given a warning after he was seen hobnobbing with his former team boss Christian Horner as well as Red Bull advisor Helmut Marko in the Red Bull Ring paddock after the race. Teams were told prior to the Austrian Grand Prix that there must be no interaction between the teams while face masks are to be worn at all times – Vettel not only lowered his face mask for the conversation but he was also in the Red Bull ‘bubble’, in which none of the Red Bull crew were wearing masks, news24.com reports.

We can understand Vettel wanting to talk shop like usual – social distancing’s a b*tch.

It’s not just sportspeople either: “I’ve accepted that 2020 will be the year of the awkward handshake,” DMARGE founder and publisher Luc Wiesman commiserates.

“Face to face client meetings are undoubtedly the worst. We stand there with hands by our sides like we’re waiting to meet the Queen.”

Fingers crossed things get back to normal soon, so we’re saved from more awkward interactions like these.