The Italian playboy has done it again.

The man delights in flaunting his Playboy lifestyle and lavish taste, regularly rocking expensive suits, designer brands and lots of bling. Long ago, Vacchi gave up a successful career in private equity and business management, and decided instead to pursue the finer things in life (that said, he still describes himself as an ‘entrepreneur’ and owns shares in his families’ business, the Italian packaging conglomerate IMA).

Another penchant of Vacchi’s, rather incongruously, is fru-fru slippers. Vacchi’s latest Instagram post shows him posing in a white linen suit, showing off a huge golden armlet and pocket chain, as well as a vintage gold Rolex GMT-Master worth $30,000… All paired with some obnoxiously fluffy slides, naturally.

Whilst he does like living the stereotypically macho lifestyle of a playboy, Vacchi’s never been afraid to embrace his feminine side, whether it’s through weirdly sultry Latin dancing or showing off his midriff and wearing stilettos (he’s actually pretty good in those).

It’s not the first time he’s rocked fluffy slides, either. He must have multiple pairs, as evidenced by this post he shared of a June teleconference (put some pants on, mate). But we’re less interested in the slides than we are in his watch, truth be told.

The Rolex GMT-Master, first released in 1955, was designed for Pan Am pilots who needed accurate timekeeping between timezones. It instantly became popular among civilians, too. Vacchi’s model appears to be an early 1955-59 “Nipple Dial” (ref. 6542) – nicknamed for its protruding gold house markers filled with lume. 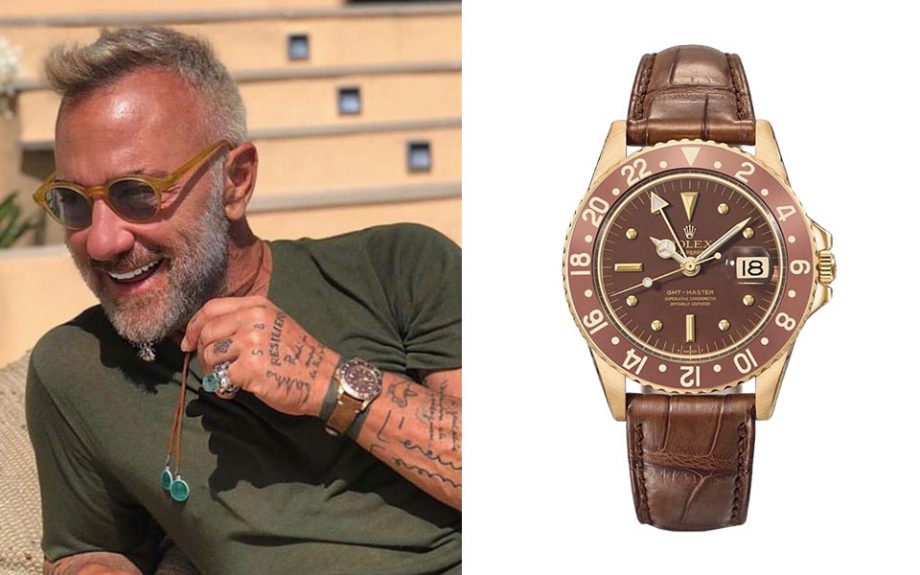 That Vacchi would have a “Nipple Dial” seems highly appropriate… Looks like he’s added his own personal touch with an aftermarket bovine leather strap, too. Nicely played.

We can laugh and point as much as we like but the reality is that Vacchi’s living his best life. We’d kill to even experience a sliver of his lifestyle – although we might forgo the slides, thanks very much.