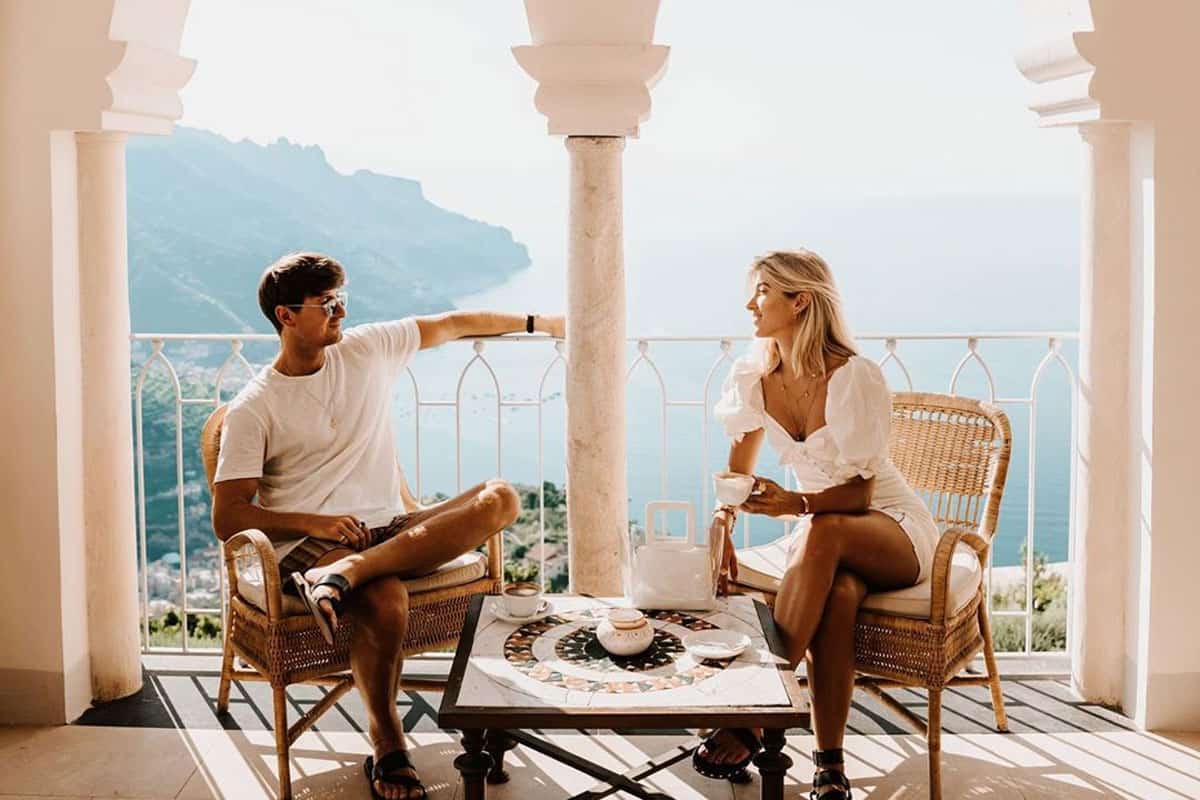 You collapse into your seat, kick your feet up, and nod off to the jolting of the carriages, backpack as a pillow.

There are many things travellers took for granted up until 2020, and the ability to drool all over a dodgy train seat was just one of them.

With The Pandemic in full swing, travellers are suddenly realising many of their favourite activities may never be kosher again.

Around the world, The Bat Kiss has bankrupted hotels, restaurants, bus operators, and car rental agencies, and sucked an estimated 100 million people out of work.

As Traveller reports, experts say “the era of risk-free travel will never return, even with the advent of a COVID-19 vaccine, and the stop-and-start nature of domestic travel in Australia foreshadows what the future of international travel will be like.”

A vaccine gives us hope. But none have been successfully developed so far, and even if one crops up, because The Virus is so adept at mutating, it may not be a silver bullet for your health at home – let alone while travelling.

This in mind, here are some of the things travellers took for granted in a pre-COVID era, which they may never get again.

As Senior Content Editor of The Telegraph (and proud millennial) Lizzie Frainier wrote in March, travel, like avocados, has become an expectation of modern life.

“The avocado stands for a lot more. It represents the life expectations of my peer group – from dining out each week and new clothes, to the latest iPhone and, most importantly, travelling the world.”

“Scan the social media accounts of my generation and you’ll see there’s one thing that binds us together: that as often as we can (when work and budget allows), we get on a plane or train and experience somewhere new.”

Even when borders re-open globally, the economic constraints and lingering health concerns of jet-setting means travel will never be quite so laissez-faire as it was last year, or if it ever is again, it won’t be until Coronavirus is as far away from 2020 as Polio.

It’s not all doom and gloom. As The Washington Post reports, “Theme parks, museums and iconic landmarks are known for drawing a crowd. But as they reopen and look to the future, those crowds are expected to be much smaller — and more controlled.”

You have to pay to play though: picture mandatory temperature checks, masks, rides, lines and seats spaced to allow for social distancing and (in the case of Disney World) characters that interact from afar.

“In preparing to reopen during this unusual time, we have to manage our theme parks in a very different way from what we’ve known before,” the Walt Disney Co. said in a statement announcing plans for a phased reopening of its Florida parks starting July 11.

The Louvre, in Paris, which has long struggled with heaving crowds, now requires all visitors (or the much-reduced number that can now get to Paris at all) to book a time slot.

DMARGE recently wrote about the golden era of travel, inspired by a stunning image from the 1960s. We could be set to revert (somewhat) to this kind of business model where airlines are forced to put their prices up, differentiating themselves with a better product, as less people travel.

On the flip side if you don’t have the coin, this could make international travel much more difficult for you. As The Washington Post reports, “While it can feel like airlines charge passengers for everything from choosing a seat to checking a bag, in reality, deregulation [over the last few decades] lowered the cost per mile for flying, making international travel more accessible than ever before.”

“The impact of the pandemic on airlines may translate to less travelers flying abroad, and, as a result, will make other parts of international travel more expensive.”

“If the airlines can only put half as many people on the plane, it’s going to cost a whole double,” says Rick Steves, the Washington-state-based European travel expert told The Washington Post.

It’s also worthy to note that as borders open we may see some hot deals to get people flying again and to grab market share, but most experts doubt this will last in the long term.

As Group Director of Food and Beverage at Ovolo Hotels, Vincent Lombino told DMARGE in June, a hotel renaissance could be on the cards. Why? Travellers will be more fearful to travel, and – when they do start travelling again – many will be reticent to check out the dodgy looking kebab shop on the corner or the street food stalls we once we so enamoured with.

Mr Lombino told us this could see hotel restaurants, after being sneered at for years, another chance to differentiate themselves: “People will find trust and faith in the strong brands,” Mr Lombino told us. In fact, “instead of running out the door” Vincent says they’ll stay “in their cool little bubble.”

A recent Traveller article makes a similar point: “Sadly, some of the world’s great gastronomic experiences just won’t exist after COVID-19. Consider the pintxos bars of the Basque Country, for example, in Spain’s north. All of those amazing displays of cold food laid out on the bars, platter after platter, row upon row – they just can’t exist anymore. The entire culture of tapas in Spain, in fact, with diners standing up and walking around and jamming in with hundreds of others, will take a long time to recover, if it ever does.”

Slurping Guinness in an Irish pub, drinking wine at an Italian mass and the classic four kiss French greeting will all be off the cards for the immediate future. How long they will take to return is anyone’s guess.

All you can eat buffets

As DMARGE reported in June, Qantas’ removal of the ‘self serve’ buffet and drink areas, in favor of snacking stations, in their airport lounges (instead allowing customers to choose from a selection of bespoke dishes from staff) could be a sign of things to come across the board in the future.

While Qantas hasn’t ruled out a return of the buffet, it seems unlikely to come back any time soon: “Some initiatives will become the norm while others such as capacity restrictions will ease as time goes on,” Qantas said in relation to the change.

“We haven’t ruled out a return of the buffet, toastie and pancake maker in the future or the reintroduction of self-serve beverage stations when restrictions ease, in the meantime, we are hopeful Qantas customers will enjoy the extra personalised offering.”

Frequent flyers like Immanuel Debeer have told DMARGE they welcome the change. Quite the contrary: it’s an opportunity to enjoy better meals – and stops the grots of the world from ruining the butter (we wish we could say this was just a metaphor).

It may be wishful thinking to expect this change to remain even if and when The Virus is eliminated, but Immanuel also told us, “Cleaning will now be a top priority, for anyone that’s travelled through Sydney on a busy day, you might know that the lounge there turns into a pig stall from time to time. I feel like [airlines] will now prioritise cleaning, which can only be seen as a good thing.”

As Traveller reports, cruising is a sector of the travel industry that has been hit particularly hard and will have to evolve if it doesn’t want to sink – particularly larger ocean liners, which will have to work a little harder to adapt than small ship cruising, expedition cruising and river cruising.

“Regardless of your choice, expect that there will be no more ‘interior’ rooms with no windows or fresh air,” Traveller reports. “Expect temperature checks every time you embark or disembark the vessel. Expect to see and to have to use hand-sanitiser everywhere.”

“Expect touchless devices for check-in and entry to your room. Expect the dining buffets to look drastically different, or disappear altogether. And expect that if there is a vaccine for COVID-19, you will have to prove you’ve had it.”

Getting to the airport late

As Traveller reports, once flights start to build up the boarding process both inside the terminal and aboard the aircraft itself “will be even slower and more tedious than in the past.” Airlines will also need more time between flights for cleaning, possibly leading to delays.

It’s also not over once you disembark. You will now have to remember to keep your distance around those notoriously crowded luggage carousels, Traveller reminds. “Perhaps grab a coffee and wait for the human parting of the seas to occur.”

This is another tricky one as the travel insurance business has not yet announced new plans for coverage in the pandemic era. Traveller describes the situation well: “Of course, overseas travel is banned by the federal government and many companies have suspended travel insurance with any plans to provide coverage for COVID-19 wholly uncertain. But if we’re to head off to New Zealand and the Pacific in the near future we’ll all need travel insurance.”

Fortunately, “the insurance industry will need travel insurance, too, since it’s a lucrative segment of their market with comparatively fewer and smaller claims than other areas,” Traveller reports. “Watch this space (and the fine print).”