(Not so) pretty in pink.

While anyone can damage a perfectly good car by driving it off the road or simply neglecting to maintain it properly, it takes a certain kind of skill (and budget) to absolutely ruin one.

Celebrities are notorious for this; they’re so rich and so famous no-one’s got the cojones to stand up to them when they want to butcher their whip.

That’s assuming that most car lovers or manufacturers have any sort of principles, of course. Ferrari are notoriously strict about what they’ll allow owners to do to ‘their’ cars, but not all brands are so discerning. Rolls-Royce, for example, will let you do just about anything to their vehicles as long as you’re ready to pay for the privilege.

Kylie Jenner, the youngest member of the Kardashian clan has recently taken delivery of a Rolls herself – and what she’s done to it proves once again that money can’t buy taste.

Jenner took to her Instagram Story to celebrate her new Rolls-Royce Cullinan SUV. This monster’s sticker price starts at AU$685,000, but the sky’s the limit when you option it out – like Jenner has, with a bright pink interior and ‘constellation’ roof.

Jenner, supermodel and beauty mogul, has an incredibly lavish car collection. Among other motors, she owns a white Bugatti Chiron, an orange Lamborghini Aventador, a ‘frappucino brown’ G-Class, a rare LaFerrari Aperta, and many custom-made Rolls-Royces alongside this newest purchase.

The first SUV and first all-wheel drive vehicle for the British marque, the Rolls-Royce Cullinan is already quite an ungainly tank of a car, weighing 2.7 tonnes and pushing 563hp (420kW) from a twin-turbo petrol V12. Upholstering such an ungraceful vehicle in neon pink leather is almost literally like putting lipstick on a pig.

Jenner’s also shelled out for Rolls’ famous ‘Starlight Headliner’ option, which adds literally thousands of fibre-optic lights into the roof of your luxury barge in order to simulate the night’s sky. This is cool, we admit, but also a touch over the top. Also, if you want to see the stars, why not just buy a convertible? 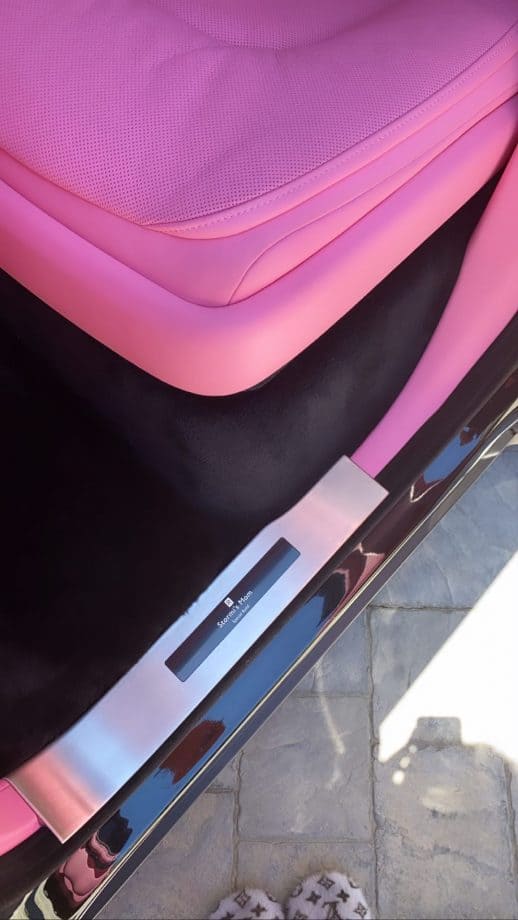 Another bespoke feature of Jenner’s car is a nameplate on the driver’s side door sill that reads ‘Stormi’s Mom’, referencing Jenner’s two-year-old daughter Stormi Webster from her relationship with SICKO MODE rapper Travis Scott. While it’s a cute touch we shudder to think how it might affect the resale value (though, to be fair, Kylie probably isn’t too hard up for cash).

That said: the awful interior might do more damage in the long run in that regard.