What would you do for an upgrade? Trade your track pants for a suit? Throw yourself to your knees at check in? Pray to the gods of ergonomics? For most people, the answer is: ‘anything but pay for it’.

Now though, with the cheap domestic flight frenzy Australia is now seeing (even if experts say it won’t last), flying business class domestically is a truly tantalising option (even if most people have no reason to travel right now).

But you already have a pretty good idea of what domestic business class looks like (especially after walking past it so many times on your way to your cattle class cell). What most people are in the dark about, however, is international business class (and not just because the lights tend to be dimmed when you walk in).

Chuck into the mix the pointy end policy changes that have come into effect of late, from killing off the lounge buffet to Hazmat suits that put Naomie Campbell to shame, and you have yourself a cocktail of luxurious ~mystery~.

What does flying international business class look like right now? DMARGE spoke exclusively with Jaynee Wehbe, global sales director at TRIANGL, who recently was granted an exemption to travel to Ibiza on business, to find out. 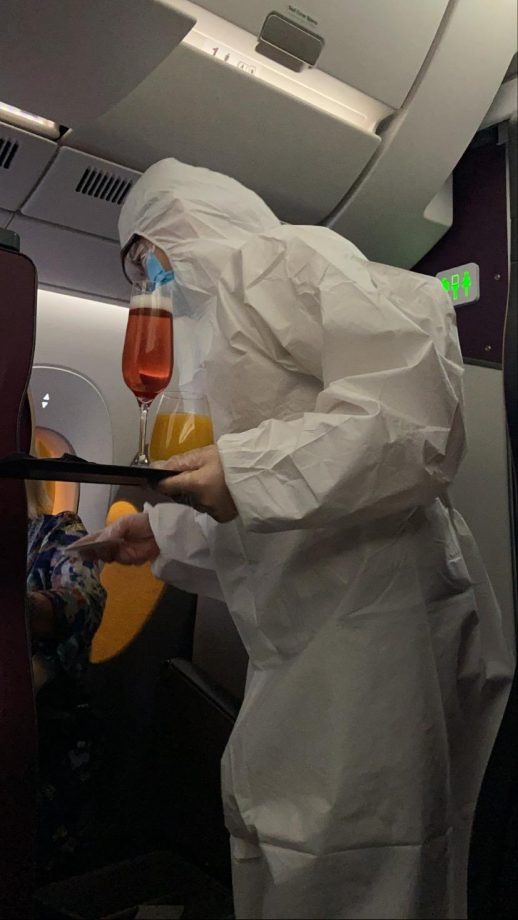 Jaynee set off two weeks back, on a work trip which involved a campaign shoot in Ibiza, then working on new collections, sourcing brands for TRIANGL’s store and sorting everything out for the rest of the year with her boss in Monaco.

Jaynee travelled from Sydney to Ibiza, on Qatar Airways business class, with stopovers in Doha and (unexpectedly) Amsterdam along the way. First though, she had to seek an exemption to travel, which she told DMARGE “was a straight forward process.”

“There’s a form on the DFAT website you fill out. I explained my work scenario – at first it was rejected as I didn’t specify a return date. You’re able to resubmit with extra info and it was then approved in a few days.”

“You then need to check with the country you’re flying into that you can actually fly there. I thought I could get into Spain on July 1 however they changed this to July 8th and made the announcement on July 3rd. Which is why I traveled to Amsterdam,” Jaynee added.

“I was meant to fly to Ibiza but they changed the restrictions without warning. So I’m in Amsterdam (only place you can fly to from Australia with no restrictions) trying my luck to get through this morning,” Jaynee told us two weeks ago.

Despite a last minute paperwork blip (“Spanish government came out with a form you need to fill in to gain entry into Spain and of course the form doesn’t work!”) she made it to Ibiza “with no dramas.”

“Got on the plane, filled in a hard copy, got to Ibiza airport and they didn’t even look at the form!!”

As for the onboard experience, this is what it’s like, according to Jaynee.

The hazmat suits are more confusing than creepy

“It made me feel more confused than anything! I mean why is it necessary to cover your entire body? And if they think it’s necessary then why aren’t we doing it too?” Jaynee told us.

“It was really hard to communicate with them too as the plane is loud enough and then you couldn’t see their mouth move or even their eyes!”

“The hazmat suit was only in business class: the other attendants wore a robe, mask and goggles only (only!). Which is also confusing…”

The flight may be safer than the airport

“Sydney international airport itself surprised me,” Jaynee told DMARGE. “From memory I didn’t see any hand sanitizer stations, check in staff weren’t wearing gloves/masks nor was there any sanitizer even though they were dealing with our passports and documents.”

“Our temperature wasn’t taken upon arrival to the airport or even before boarding the flight which I found weird as we’re getting our temperature taken at restaurants now!”

Face shields may not prove as effective as you think

“Another thing I found weird” Jaynee told us, “was that they were handing out face shields for the flight and you weren’t allowed to walk onto the plane without wearing one. But as soon as you walked past the flight attendant when you’re on the plane, you could take it off and have it off for the whole trip.”

“I just found the whole process inconsistent. Measures in place just to say that measures are in place.”

In terms of overall experience though, international business class on Qatar Airways remains much the same

“Other than the above comments, business class was much the same!”

This all comes in a context where international travel for leisure for Australians looks increasingly unlikely until at least mid-2021. So, despite the rumoured travel bubbles in the works, unless you’re travelling on essential business, it looks like you’ll have to scratch your business class itch vicariously for some time yet.

Bitcoin Is Tanking! Everything Australians Need to Know About The Crypto Crash