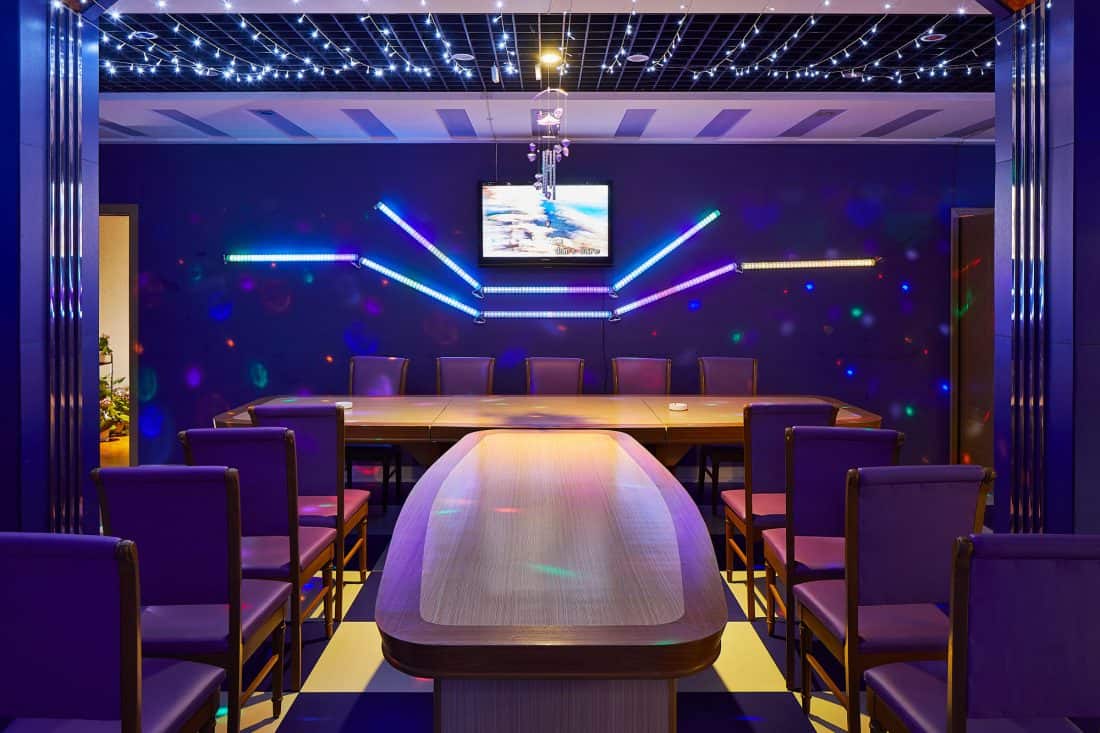 North Korea is known for many things. Fun is not one of them. But when tourists visit, they are shown a different side to the doom and gloom portrayed in the press.

Granted: it’s an act. But some might argue it’s no different to staying in a five-star resort in Bali. Whatever you think about that, two Australians have just come out with a book that offers a rare insight into a bunch of North Korean hotels that hosted “socialist-friendly comrades” during the glory days of Soviet bloc tourism in the 70s and 80s and which Westerners seldom stay in.

They don’t claim it shows every facet of the country. But it does provide a rare glimpse into what it’s like to stay in a rarely broadcast part of Pyongyang.

It’s perfect timing too. With international flights having been slashed and many globetrotters wiling away at home, the photos, published by publications like The Times and Traveller, are a welcome chance to live vicariously.

As Traveller reports, “For Scullin, 37, it was a chance to satisfy his curiosity by getting inside hotels he had only seen from the outside as a tour guide.”

For Reed, it was a chance to test her specialist “skill in perspective and picking up light, which pervades North Korean interiors and neon signs,” Scullin says on The Hotels Of Pyongyang (THOP) About Page.

Scullin also says, “Many express a degree of trepidation when considering a trip to the DPRK but Nicole was eager to board the Air Koryo flight from Beijing to Pyongyang as soon as possible.”

“Western tourists have typically stayed at one of Pyonyang’s two ‘deluxe hotels’ – the Koryo and the Yanggakdo.”

“To some, spending time in the hotels may sound restrictive, but to me the hotel design, strange amenities and shy staff have always been of places with the greatest opportunities to bond with local Pyongyangites.”

“With almost everything in North Korea state-run, a business like a hotel does not close down during low tourist periods, meaning the hotels in Pyongyang have survived a number of economic hardships the country has faced,” Scullin also states.

“Taking inspiration from the highly revered genre of Soviet architecture photography, I first got the idea to use my connection to North Korea to document these strange structures and brutalist relics.”

But forget guns and missiles, the most interesting aspect of these hotels is arguably the karaoke rooms.

Sosan Hotel – Karaoke Gallery 🎤⭐️🚨💎🎤 With distinct neon coloured room, the Sosan Hotel is known for having the most extensive English language song list in Pyongyang. Hotels of Pyongyang is available exclusively online. Shipping worldwide to your coffee table. ✈️🌍📦📚 Photography by @nicasa

While a tough project to organise (to hear the pair of them talk about it, check out this podcast), Scullin says it was worth it in the end: “It was a lot of work over a short period of time but I recall the thrill of looking at Nicole’s wonderful images on the flight back to Beijing, knowing that we had captured what we came for.”