Most people would do anything for an upgrade. But for Australians returning from essential trips abroad, they have little choice but to shell out for this luxury. In fact, many passengers are being forced to book business class tickets, or else risk being bumped from the flight and not getting home at all.

They are also being made to “feel like criminals,” one passenger has told DMARGE.

To give you a sneak peek into what all this looks like, DMARGE spoke exclusively with Jaynee Wehbe, global sales director at TRIANGL, who earlier this year was granted an exemption to travel to Ibiza and Italy on business.

Traveller reports that “since the Australian government’s international travel ban came into effect in March, more than 90,000 applications to leave Australia have been lodged, and only 22,640 of those have been approved.”

Jaynee, who in July told us about the bizarre ‘new reality’ of flying business class to Europe, is one of them.

Jaynee has since returned, along the way confirming the rumour many returning Australians are being forced to fly home in luxury. 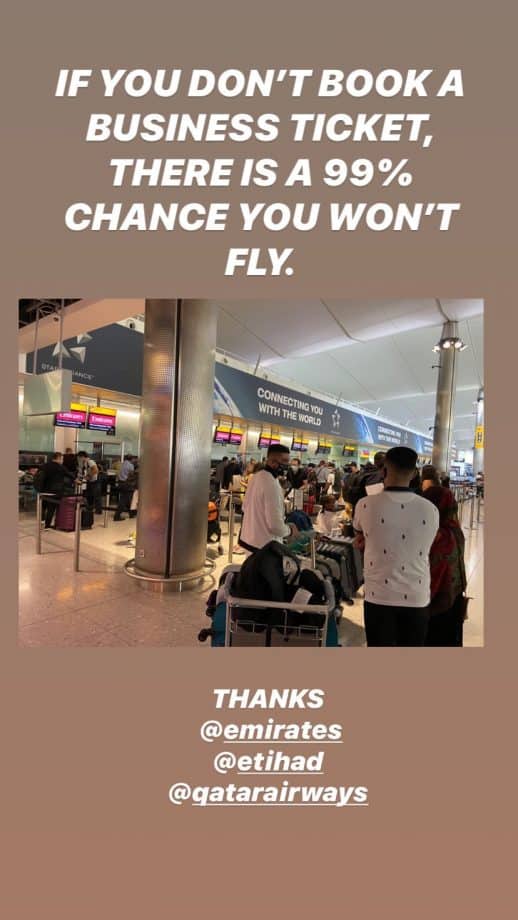 Jaynee’s first flight home was supposed to go Nice-London-Doha-Sydney with Qatar on the 2nd of July. Jaynee tells us, however, “A couple of weeks before departure they canceled the Nice- London flight with no notice (I just checked for myself).”

“Had to rebook my own Nice-London flight.”

“I got to London 5 days before my scheduled London-Sydney flight,” Jaynee continues. “Two nights before I get a call from Qatar saying I have been taken off the flight and they can move me to the 10th of July on business. Only business class were traveling, all economy were being bumped.”

“I declined this and instead booked with Emirates for the 6th of July. So I stayed in London for an additional 4 nights.”

“On the 6th I get to Heathrow airport, go to check in and then am told that Dubai have changed their rules and no one is allowed to board without a negative COVID test. It was the first I had heard of it. No email or anything – I booked before the rule existed and Emirates didn’t alert me.”

“There are no on the spot COVID tests at the airport and the quickest test turnaround is 36-48 hours.”

“I call to see when the next available flight is and it’s not until the 16th of July on ANY airline.”

This ‘passenger culling’ trend (Jaynee told DMARGE there were only about 40 people on the flight she eventually made it home on) started after the Australian National Cabinet cut international arrivals from a maximum of 6,500 per week to 4,000 per week, a policy which came into effect on Monday the 13th of July, causing chaos among expats and returning travellers.

The new limit, designed to ease pressure on hotel quarantine, has been leading airlines to cancel passengers’ bookings.

Jaynee is far from alone. Australians like Jim Collins and his family, who told the ABC in July they had been trying to get home to Tasmania from the UK since March, have also been hit hard by this phenomenon.

Mr Collins told the ABC in July, “We’ve repeatedly tried to get flights … And every time we’ve been able to do that, the flights have been cancelled.”

Last month, DMARGE reached out to Qatar Airways to seek comment on this.

Qatar Airways responded: “Due to the limitations on passengers travelling to Australian destinations, Qatar Airways analyses each flight on a case by case basis to ensure we facilitate onward travel to the final destination for as many passengers as possible.”

Jaynee’s experience suggests this culling is still happening in August.

“I think 90% of the flight on the way home was business. It was easier for me to use the economy toilets rather than business that’s how empty economy was!” Jaynee tells us.

“I only saw a handful of people in economy, mainly business and first class only.”

Jaynee also provided DMARGE with several more observations on what it’s like to fly from Europe to Australia right now.

Many flights have barely anyone on them

There is a metric sh*t tonne of administration

“This is the 8th form I’ve filled out with the same information that no-one collects.”

Though the Hazmat suits are more to put customers’ minds at ease than anything, it’s interesting to see the different airlines’ approaches.

The ‘welcome home’ announcement is not very welcoming…

“Substantial fines or a term of imprisonment” await passengers not complying with quarantine requirements, according to a message broadcast on arrival. While understandable, it’s not exactly a warm ‘Bienvenue’…

As Jaynee told DMARGE, “[the] welcome home announcement was a little intense – the common sentiment amongst us was that we felt like criminals.”

Passengers don’t love being made to wait around for hours… 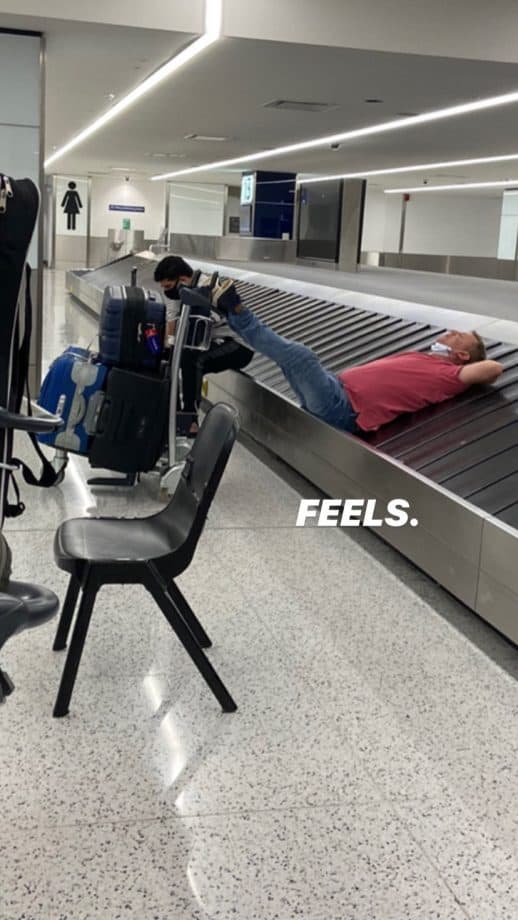 “And now we sit here and wait two hours with no communication as to what’s happening next.”

Sydney Airport’s safety protocols may be painstaking, but they are important

According to Jaynee, there are nurses checking if arriving passengers have COVID at Sydney airport. If you are found to have it, you go to a hotel hospital.

Hotel quarantine is a bit of a gamble

But at least once you get there you’ve got plenty of help (Jaynee also posted a video, thanking army officers for helping her lift her 40kg suitcase down the stairs).

Quarantine is a blessing and a curse

“Even though I have no access to fresh air or sunshine for two weeks, I am so grateful for this whole experience,” Jaynee wrote on Instagram.

This all comes in a context where international travel for leisure for Australians looks increasingly unlikely until at least mid-2021 (unless, as Alan Joyce said this morning, a travel bubble with New Zealand comes to fruition at the beginning of next year).

So, unless you’re bouncing on essential business, it looks like you’ll have to scratch your travel itch vicariously for quite some time yet – and be ready for some administrative stress when booking your flight home.