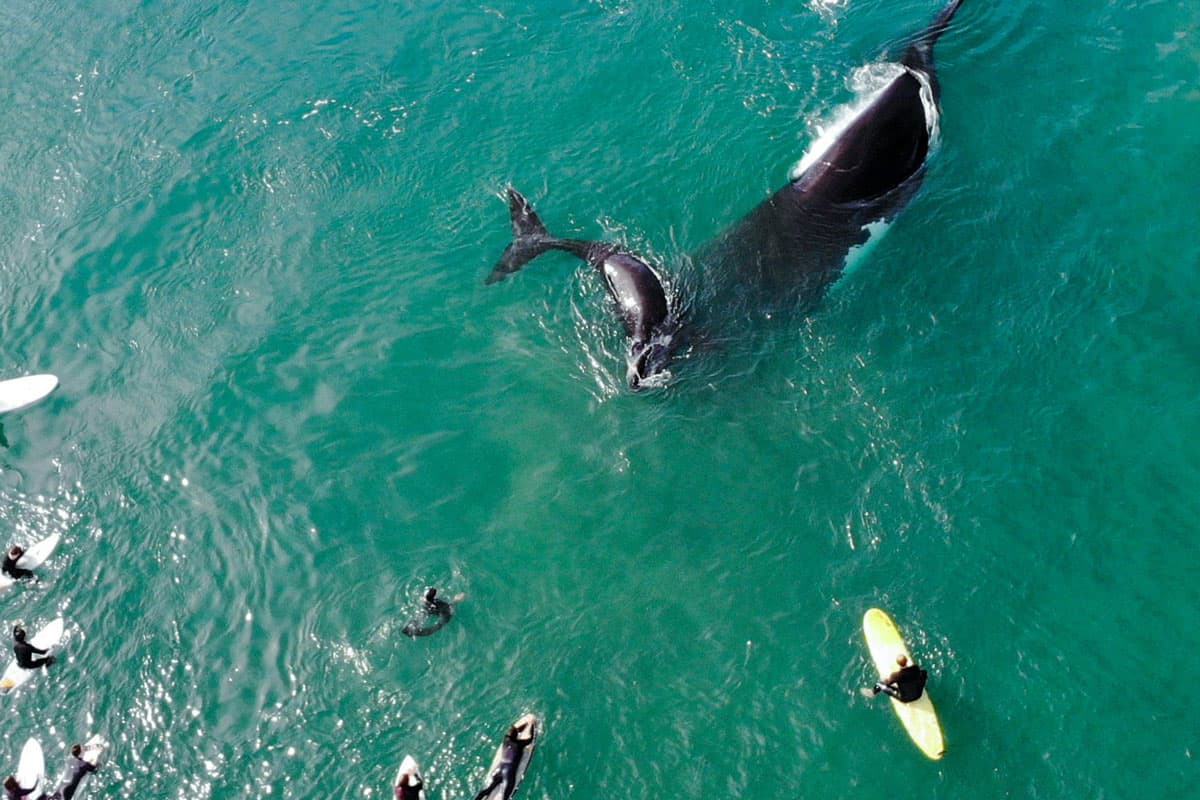 A brief scan of the weekend’s news suggests Australia is falling apart. Confirmed cases are on the rise in Victoria, the recession is just getting twanging (despite some positive noise from the ASX) and Sydney real estate agents’ favourite joints (yacht clubs, Fitness First) keep being shuttered.

Forget all that for a minute though; indulge in a slice of sweeter news. A mother and calf whale put on a show in Sydney’s North on Sunday afternoon, frolicking within 10 metres of surfers at Manly beach, in a display most tourists would kill to experience.

Though some were initially worried the whales might be stuck, surfers said that was not the case.

Guardian Australia reported this is quite early in the year to see a whale calf in Sydney: “Eastern Australian humpbacks migrate north from Antarctica, along the coast to tropical waters in north Queensland from April to July.”

“The whales give birth in the warmer waters and often mothers and calves are [usually] spotted heading south during the latter part of the Australian spring.”

One boardrider told Guardian Australia he had never seen a whale, particularly a calf, come so close to the beach at Manly.

“There was a bit of pointing going on and I looked round and the little one was just there.”

John Martin, the author of the above video, however, pointed out that despite initial media reports the whales were humpbacks, they were actually southern right whales (as well as admitting he was “wrong re nets” and that the whales were swimming freely).

Beyond providing ~refreshing~ news amid the pandemic, the incident also highlights one of the reasons Australians – particularly on Sydney’s Northern Beaches – love the beach so much.

Unlike Bondi, where there appears to be a larger emphasis on strutting your stuff, Sydney’s north is known for its more relaxed atmosphere, and beachgoing for the sake of beachgoing (knowing that if you go often enough, sooner or later you are likely to see something special).

There aren’t many other metropolitan hubs where you can do that, and be at the CBD in 17 minutes (#fastferry for the win), in the world.

The upshot? The fact that Sydney’s nightlife has become an international laughing stock may not matter in over the next few years. In fact, as we adjust to the ‘new normal’, places like Manly, where residents enjoy the best of both worlds, may become more sought after than ever, even as property prices drop across the board.