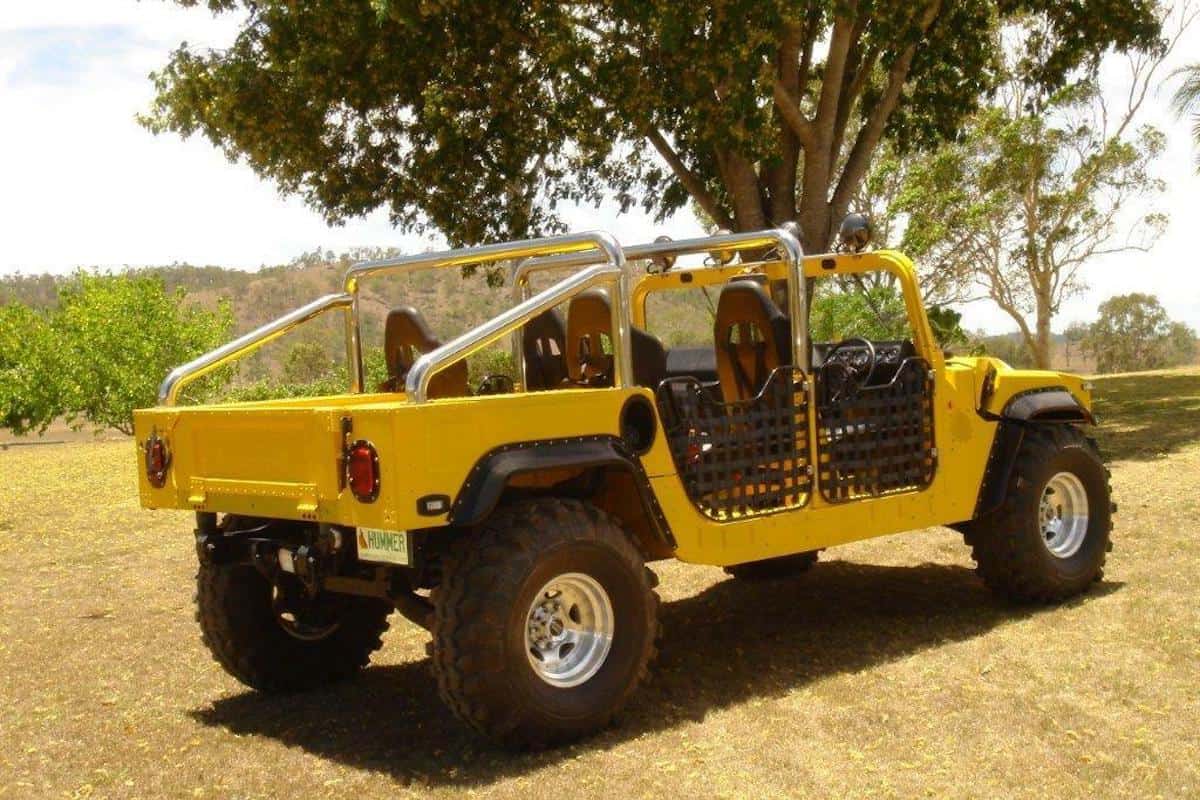 Fun fact: Arnold Schwarzenegger is almost singlehandedly responsible for bringing the Hummer into being. The story goes that while the legendary action movie star was filming the classic comedy film Kindergarten Cop in the early 90s, he saw a military convoy of M998 HMMWV trucks (High Mobility Multipurpose Wheeled Vehicle, aka the Humvee). Taken by their buff aesthetic, he lobbied their manufacturer, AM General, to produce a civilian version. They did, calling it the Hummer – Schwarzenegger bought the first two ever made.

These early Hummers, retroactively called the H1, were still basically military vehicles – they were never designed for civilian use. Some concessions were made for civilian consumers such as conventional glossy car paint instead of military drab and a cushier suspension, but there was no getting away from the fact that it was still a fish out of water. No styling whatsoever, not particularly comfortable, incredibly thirsty, but with off-road capabilities and a look unlike any other car on the market, the Hummer was an unexpected sales success.

Subsequent Hummer-brand models such as the H2 and H3 were much more like conventional SUVs than the rugged H1. Without the military credibility and spartan driving experience of their H1 and Humvee forefathers, the later civilian Hummers were nothing but oversized, overpriced emblems of American excess. They still sold, mind you, but they’re not cool. H1s have cred.

But this Hummer on sale in Mackay, Queensland has more cred than even Schwarzenegger’s H1s, as unlike his cars, this Hummer is literally a military vehicle. Indeed, it’s not even really a Hummer – it’s a bona fide Humvee. And it might just be the toughest, roughest car in Australia. 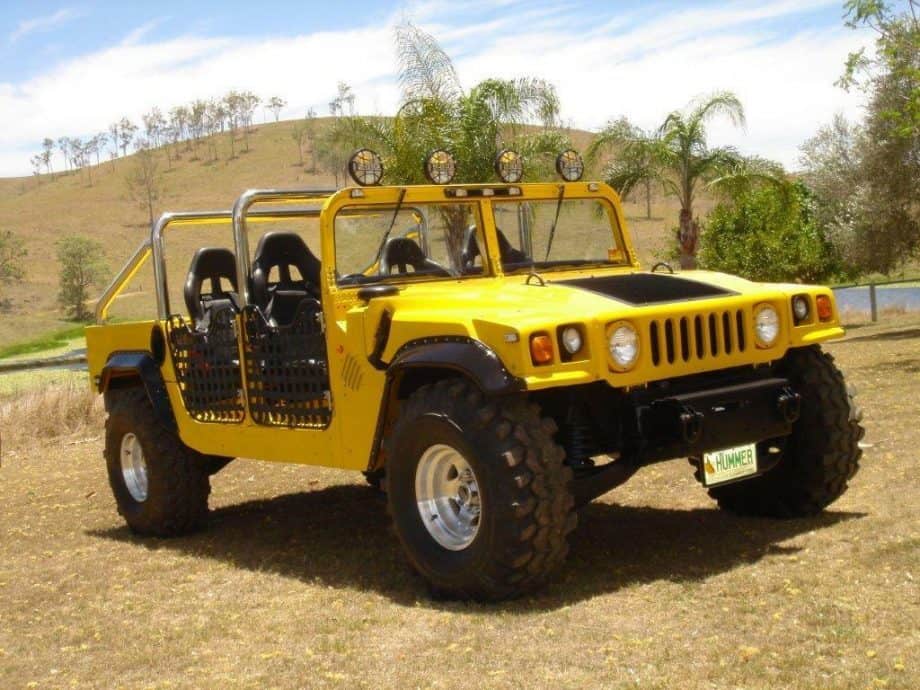 The ‘HUMMER’ license plate is a great touch, too. Image: eBay

“This is a genuine 1986 ex-US Air Force military Humvee, not a civilian H1 Hummer,” the owner relates.

“The original importer brought 7 into Australia in 2001, kept this one for himself and modified it to the stage you see it as now after a full body-off restoration.”

“For a military vehicle this machine is in perfect condition and it’s hard to believe that it was once in a war zone. It has stainless steel roll bars, racing bucket seats and seatbelts, flare kit, Ziel spotlights, American racing mags with 15/39.5-16.5LT Interco Super Swamper tyres, custom-built dash and console with CD [player] and radio [plus] a spare set of civilian rims and tyres… only 1533.4 on the clock after restoration and conversion to RHD. It comes with a roadworthy certificate and is fully registered and insured on the road.”

“This is a very rare and unique machine capable of traveling over the worst terrain you can throw at it. The possibilities for a machine such as this are endless… it is a showstopper and head-turner wherever you go.” 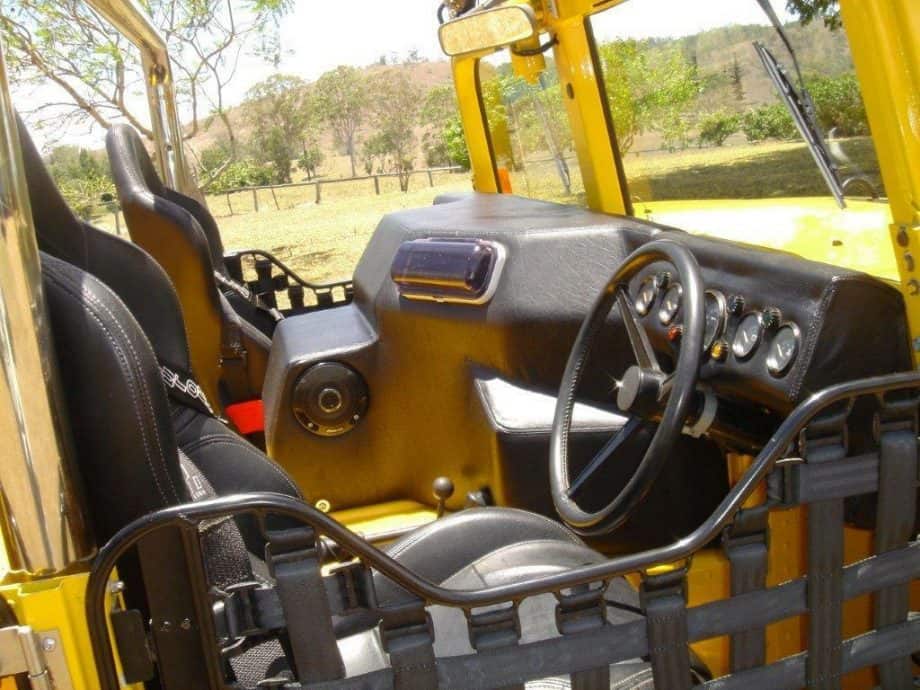 The fabric mesh doors might not be very safe but they are very cool. Image: eBay

This Humvee has many features that the average 4×4 lacks due to its military origins. Its oddities include a top-mounted radiator for its huge 6.2 diesel V8 engine; inbound brakes, portal gears and an armoured undercarriage; a central tire inflation system and run-flat tires; 41cm of ground clearance, and absolutely no fuel economy. On top of that, it’s got mesh doors, no roof and a bright yellow paint job. You’ll never be able to blend into the crowd whilst driving it – but that’s the point, right?

It’s a very different beast to this Hummer H1 Alpha on sale in NSW. While that vehicle is similarly outrageous both in terms of size and style, this yellow baby is the yin to its yang. The H1 is the ultimate bugout vehicle; a luxurious yet capable personal transport. Conversely, this Humvee is a party on wheels – an utterly ridiculous retro Tonka truck of a car that defies logical explanation. It’s the perfect antidote to po-faced Toorak tractors and Jeep Wrangler wannabes.

This mil-spec monster is currently listed on eBay with a buyout price of $78,000, if you’re the kind of punter that finds the Lamborghini Urus too subtle for your tastes.