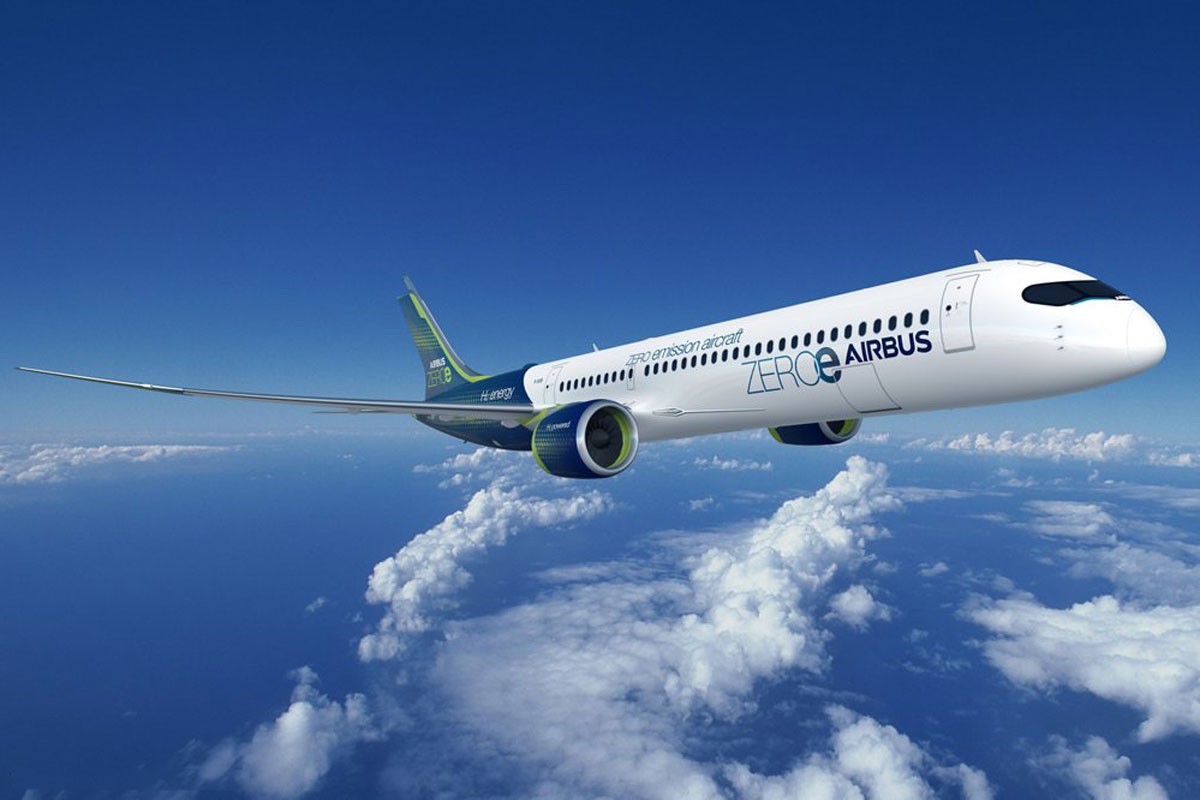 Airbus yesterday in Toulouse unveiled three concepts for the world’s first zero-emission commercial aircraft which could enter service by 2035. Each of the three concepts represents a different approach to achieving a zero-emissions flight, exploring various technology pathways and aerodynamic configurations in order to support Airbus’ goal of leading the way in the decarbonisation of the entire aviation industry.

Airbus has announced all of these concepts rely on hydrogen as a primary power source – an option the company believes holds “exceptional promise” as a clean aviation fuel and is likely to be a solution for aerospace and many other industries to meet their climate-neutral targets.

“This is a historic moment for the commercial aviation sector as a whole and we intend to play a leading role in the most important transition this industry has ever seen. The concepts we unveil today offer the world a glimpse of our ambition to drive a bold vision for the future of zero-emission flight,” said Guillaume Faury, Airbus CEO.

“I strongly believe that the use of hydrogen – both in synthetic fuels and as a primary power source for commercial aircraft – has the potential to significantly reduce aviation’s climate impact.”

The three concepts – all codenamed “ZEROe” – for a first climate neutral zero-emission commercial aircraft, Airbus has said, include:

A turbofan design (120-200 passengers) with a range of 2,000+ nautical miles, capable of operating transcontinentally and powered by a modified gas-turbine engine running on hydrogen, rather than jet fuel, through combustion. The liquid hydrogen will be stored and distributed via tanks located behind the rear pressure bulkhead.

A turboprop design (up to 100 passengers) using a turboprop engine instead of a turbofan and also powered by hydrogen combustion in modified gas-turbine engines, which would be capable of traveling more than 1,000 nautical miles, making it a perfect option for short-haul trips.

A “blended-wing body” design (up to 200 passengers) concept in which the wings merge with the main body of the aircraft with a range similar to that of the turbofan concept. The exceptionally wide fuselage opens up multiple options for hydrogen storage and distribution, and for cabin layout.

“These concepts will help us explore and mature the design and layout of the world’s first climate-neutral, zero-emission commercial aircraft, which we aim to put into service by 2035,” said CEO Faury. “The transition to hydrogen, as the primary power source for these concept planes, will require decisive action from the entire aviation ecosystem. Together with the support from government and industrial partners we can rise up to this challenge to scale-up renewable energy and hydrogen for the sustainable future of the aviation industry.”

According to Airbus, to tackle these challenges, airports will need significant “hydrogen transport and refueling infrastructure” to meet the needs of day-to-day operations. Support from governments will likewise be key to meet these “ambitious objectives” with “increased funding for research & technology, digitalisation, and mechanisms that encourage the use of sustainable fuels and the renewal of aircraft fleets to allow airlines to retire older, less environmentally friendly aircraft earlier,” Airbus has stated.

While this is a big step in terms of a needle-moving company aiming its rudder at a more eco-friendly future, for some, it’s neither good enough nor quick enough.

“Would be amazing if it’s 2025 Instead of 2035,” one Instagram user wrote under Airbus’ social media announcement (the same user later admitted they were commenting as an “avgeek” not necessarily as an environmentalist).

“Not sure how will you achieve net zero emissions because hydrogen is produced from natural gas. So you still fossil fuel to produce a fuel to use in airplane,” commented another.

“They changed only fuel from high octane to hydrogen… that’s all,” another said (in a claim that needs checking out).

In celebration of this #ZeDay #ZeroEmissionsDay, we’re so excited to unveil our 3 #zeroe concept aircraft fuelled by hydrogen. Each option takes a slightly different approach that will help us to realise our ambition of bringing a zero-emission commercial aircraft to market by 2035! Check our #Story for more details! ✈️ #airbus #airbuslovers #cleanaviation #aviation #aviationlovers #plane #instaplane #instaaviation #innnovation #futurofflight

Other Instagram users were more complimentary: “Hydrogen!! Yesss, finally. No electric,” remarked one.

Another called for Boeing to innovate too: “Airbus always pushing forward not like Boeing. We just need a clean way to do hydrogen now, the energy of the future.”

This links to a broader cultural ‘clenchpoint’ – Prometheanism vs. the ‘back to basics’ school of thought. The former argues we should use resources freely, innovate with no limits, and have faith in human ingenuity to solve the problems that arise down the line, the latter of which argues we should cut the excess out of our lives, live more frugally, and not take those round the world trips to begin with (at least not until we’ve already found an innovative way to do so in an environmentally friendly manner).

What will happen next? Watch this (air) space.