For almost 60 years, Arnold Schwarzenegger has been one of the world’s most prominent fitness figures. The bodybuilder, actor and politician has had one of the most unlikely career trajectories in modern history – transcending humble beginnings as the son of a policeman in rural Austria to becoming a fitness icon, film star and eventually the Governor of California. There’s no-one else quite like him.

The 73-year-old doesn’t show any sign of slowing down, either. Schwarzenegger, who’s highly active on social media, regularly shares footage of his workouts and fitness advice with his millions of fans (as of September 2020, ‘the Governator’ has over 21 million Instagram followers).

His latest post is par for the course – showing off a workout from the comfort of what appears to be his home office. Keeping things casual in a t-shirt, shorts and a pair of old Vans, Arnie works up a sweat with some t-bar rows while listening to some Taylor Swift (a little unexpected but we back it).

Old, but not obsolete. T-bar rows are one of my favorite exercises. Here’s some Monday motivation!

It’s entertaining that Arnie’s home office has more exercise equipment than most people’s home gyms. Indeed, his own home gym is a virtual fitness paradise, with more machines than a Terminator movie. Still, when you’re worth over $400 million and virtually your entire life revolves around being totally jacked, perhaps having weights in every room in your house makes sense.

What’s notable about this exercise is how low-tech it is. A t-bar row machine is at its core just a few pieces of piping – nothing like the expensive, bespoke exercise machines other millionaires buy for their superyacht gyms or Mark Walhberg’s ‘recovery stimulating’ $18,000 Power Plate for example. You could make one of these t-bar machines at home with only some basic welding knowledge (or buy one for cheap).

The other ‘low-tech’ form of exercise that Arnie’s a big fan of is cycling. During COVID-19, the seven-time Mr. Olympia winner has been spotted numerous times wheeling around Los Angeles on his custom fat-tire pushbike by paparazzi and fans alike. Indeed Arnie’s posted some of his on-bike antics himself on numerous occasions, extolling the virtues of cycling (and wearing a mask when you go outside during this pandemic). It’s definitely a better health move than tooling around in a ‘Schwarzenegger-spec’ Humvee, that’s for sure. 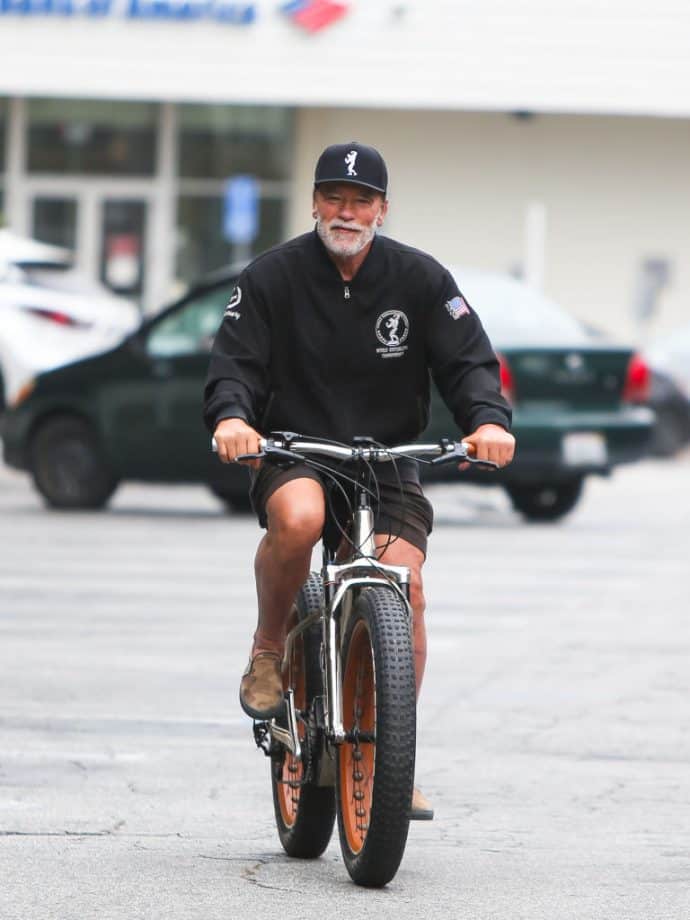 Schwarzenegger spotted with his beloved bike on June 24 earlier this year. The eagle-eyed might notice he’s wearing the same Vans here as he was in his t-bar exercise video. Credit: Getty Images

Clearly keeping things low-tech and old-school is working out well for Schwarzenegger: he’s still in impeccable shape and arguably looks better than he has for years. The salt-and-pepper beard suits him, too.

Aside from his advocacy for PPE during the pandemic, Arnie’s charity After-School All-Stars recently partnered with social media giant TikTok to provide food to struggling families during COVID-19. Clearly, good karma is also essential to a tip top rig.