The green and gold connection is more than just skin deep. 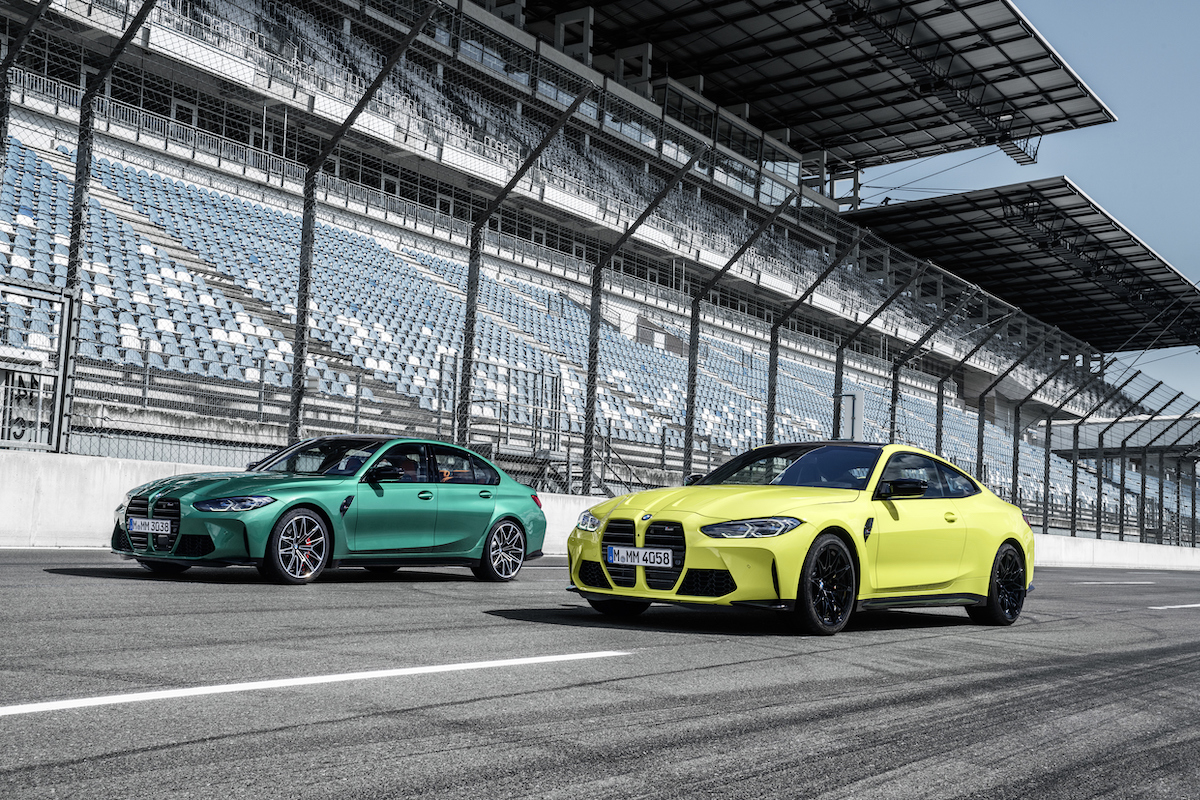 Have you ever seen a hotter pair of twins? The new BMW M3 and M4, in 'Isle of Man Green' and 'São Paulo Yellow' respectively.

It’s widely acknowledged that Australia has some of the best driving roads in the world. But it’s no good having great driving roads if you don’t have a similarly great car to enjoy them in.

It’s also widely recognised that BMW has some of the best performance cars money can buy. While BMW is far from the only German carmaker that makes sporty cars, unlike many other marques, performance comes first at BMW. Some BMWs might be luxurious but they always prioritise driving dynamics over everything else: that’s why they’re so well-regarded, particularly in Australia.

But not all BMWs are made equal. BMW’s M division takes normal BMWs and turns the dial up to eleven. Originally founded to facilitate BMW’s racing program, BMW M is now one of the world’s most respected factory tuners, an ‘M’ badge just as coveted (if not more so) than an AMG badge on a Mercedes or a Nismo badge on a Nissan. ‘M cars’ are, quite frankly, insane – truly the ultimate driving machines, as the tagline adroitly says.

In an unprecedented move, BMW have chosen the Land Down Under for the global launch of their newest (and hottest) hotted-up beauties: the 2021 BMW M3 sedan and BMW M4 coupé. Under a veil of secrecy during the COVID-19 crisis, BMW snuck the two speedsters into Australia for a unique launch film, playing with the idea of ‘rumours’: rather than dispelling or ignoring the rumours surrounding their hotly-anticipated M cars, BMW instead decided to embrace the whispers, literally whipping the media up into a frenzy, leaving the speculation in the dust.

It’s a truly special opportunity for Australia, which as an automotive market tends to play second fiddle to bigger regions, such as North America or Europe. In an exceptionally appropriate move, the M3 and M4 are decked out in lustrous green and gold – Australian national colours and new shades exclusive to the pair of performance heroes. But why has Australia been chosen for the global launch?

“The M brand is incredibly strong here,” he proudly relates.

“Australia is one of the top three markets worldwide for M cars… One in five BMWs sold in Australia are M cars, ahead of both the UK and the US.”

Indeed, the only two countries more in love with BMW M are our neighbours across the Tasman in New Zealand and world watch capital Switzerland. That’s perhaps no surprise, as all three countries boast incredible driving roads (as well as citizens who know a thing or two about cool cars, clearly).

There’s a lot of information to digest regarding these Bavarian beauties, so let’s go over the most important features.

The biggest question looming over the M3 / M4 pair (designated the G80 and G82 internally) was whether they were going to feature the controversial new ‘kidney grille’ design that debuted on the new second-generation (G22) 4 Series. The larger interpretation of the classic BMW grille design had many BMW fans fuming, and the rumour mill has been in full swing as to whether the M3 / M4 would have a similar grill, too.

The short answer? Yes, the pair do feature the new grille design – but it’s not what you think.

The 4 Series’ grille is larger, more angular, has both apertures pinched close together and features a honeycomb design. The M cars’ grille however has glossy black horizontal slats and a far less severe appearance. It looks more like a jet engine intake than a pair of nostrils, which is sure to elicit a huge sigh of relief for BMW purists. They also have the net benefit of making the cars look wider and more purposeful – a point hammered home by the M car’ characteristically widened stance and burbling quad exhausts. A closeup of the new M3’s grille, which the M4 also shares.

Compared to the outgoing F80 M3 and F82/83 M4, the pair are far more angular and aggressive, continuing BMW’s move towards more geometric design. It makes the cars look far less staid and gives them far more presence than previous models, and sets them apart from the rest of the market.

As alluded to above, the pair come in three exclusive new shades: ‘Toronto Red’ metallic (which is yet to be revealed), ‘Isle of Man Green’ metallic and ‘São Paulo Yellow’ non-metallic – as demonstrated on the M3 and M4 respectively. At DMARGE, we’re big proponents of green cars, so the Isle of Man Green has got our mouths watering – but the São Paulo Yellow is arguably even more exciting. That it’s been showcased on the M4 like this is especially apt; it suits the coupé perfectly.

Another aesthetic first for the new M3 / M4 is that you can choose the colour of your brake calipers from the factory – red, blue or black, for the record.

Also cool are their carbon-fibre-reinforced plastic (CFRP) roofs with aerodynamically optimised fins, a rear spoiler and the two pairs of fat, 10cm-wide exhaust tailpipes that are now a customary feature of M cars.

Of course, the biggest visual difference between the two cars is the number of doors. BMW haven’t said anything explicit yet about the new M3 Touring as part of this launch, but we have it on good authority that it’s on its way too (look at us, getting involved with the rumours too!) Otherwise, they’re basically identical under the skin, right down to performance figures.

Speaking of, the 2021 M3 and M4 have raised the stakes when it comes to driving dynamics – they’re faster and more capable than ever before.

Both are powered by a formidable straight-six engine – the twin-turbocharged S58 that first appeared in the G01 X3 M – which is to be offered in two states of tune depending on the transmission offering. Buyers have a difficult choice to make: basically, you can get the M3 and M4 with a six-speed manual transmission, but only in the ‘base’ trim. The higher ‘Competition’ trim delivers more power but is only available with an eight-speed M Steptronic transmission.

BMWs are famous for their exceptional handling and the new M cars are no exception, featuring extra bracing and adaptive M suspension across the range for better cornering. 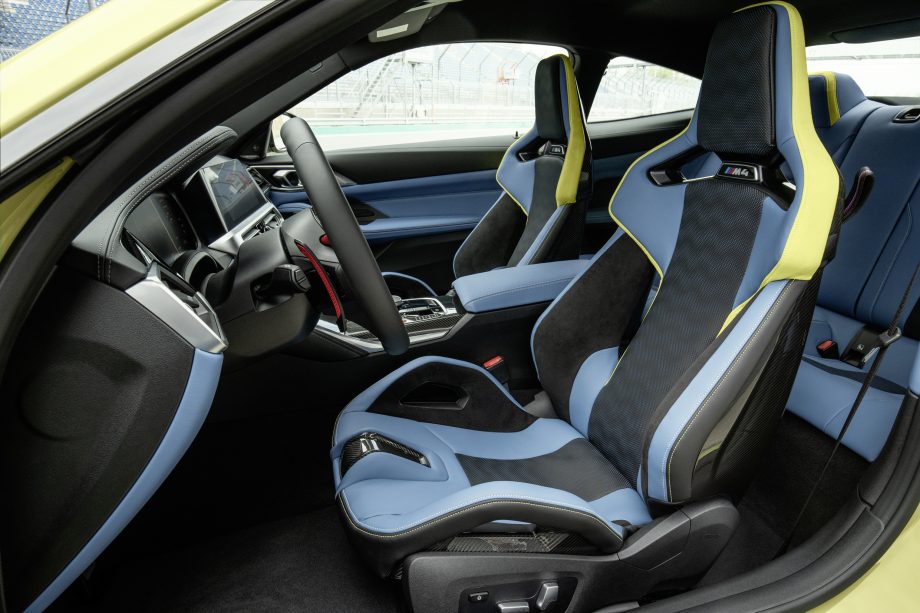 A standout highlight of the options list is the new M Carbon bucket seats, which are a particularly innovative new edition to the M range. BMW M is a tuning house, after all, and race-spec bucket seats like this really add to the sensation that the new M3 and M4 are factory-ready tuner cars. The standard M sport seats are still pretty bolstered (and feature seat ventilation for the first time), but if we were in the dealership, we’d be speccing the bucket seats, hands down.

There’s plenty of specs to pour over – too many to list here – but what’s the big takeaway from this launch?

Firstly, that BMW is paying attention to Australia more than ever, which is good news for Australian drivers. Perhaps BMW’s interest will spark other performance marques to up the ante and bring more cool models our way, which would be amazing.

Secondly, that BMW is becoming fun. Not that they’ve ever been boring, far from it – but the design and launch of these two sports cars reveal that the brand knows how to cut loose. From the funky new ‘Aussie spec’ colours to the cheeky film right down to the driver-focused options available for the cars, the new M3 and M4 show that BMW is better in 2020 than it’s ever been.