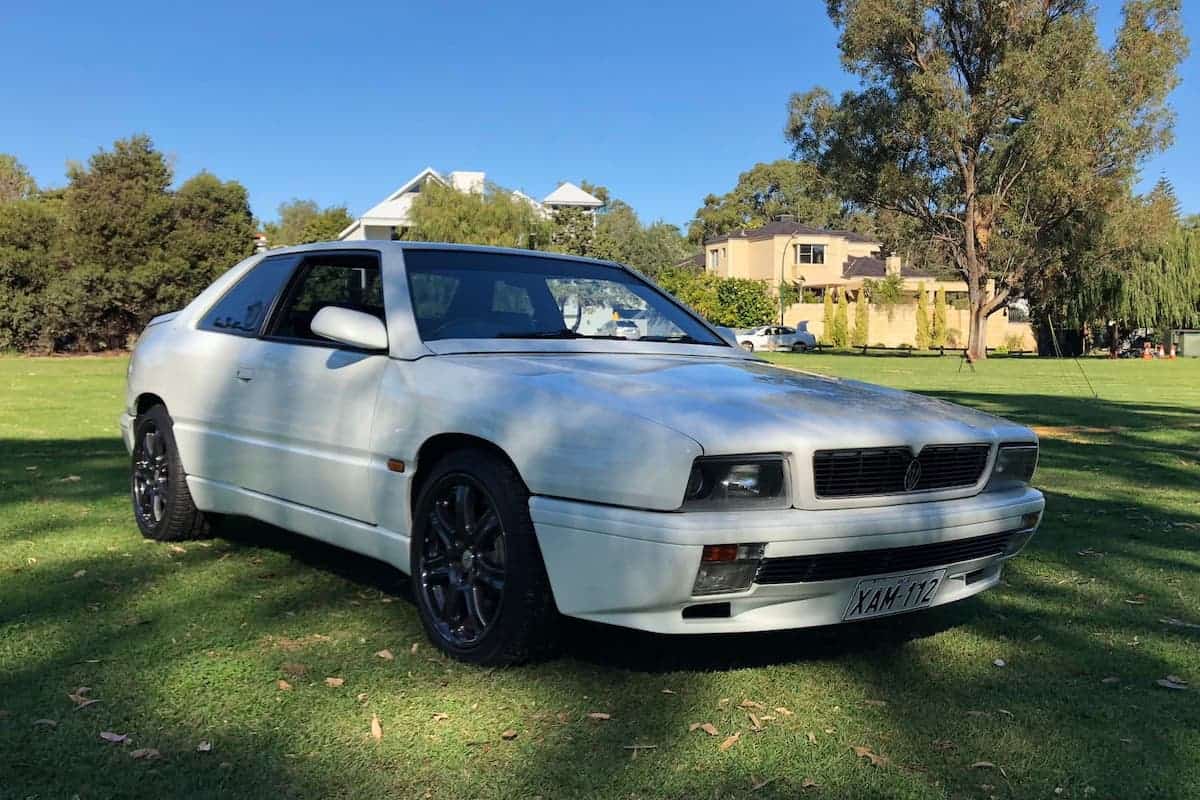 Bello in bianco: the 1997 Maserati Ghibli GT (AM-336) with a rare manual transmission. Image: Carsales

The Italian motoring industry is one of the largest in the world, and many of the world’s most iconic brands hail from the Stivale: Ferrari, Lamborghini, Alfa Romeo, Pagani… With so many illustrious names, it’s hard to keep track. That’s not to mention the many brands that are no longer, like Bizzarrini, De Tomaso or Lancia (the latter technically still exists but only sells one car, the Fiat 500-derived Ypsilon, which looks to be the last vehicle they ever produce).

Maserati was another Italian performance marque that looked to join the graveyard of departed car brands many times during the 20th century. After years of rocky finances and flitting between different owners, the brand has finally found its footing as part of a branding group with Alfa Romeo, Maserati, and Abarth under the huge Fiat Chrysler Automobiles (FCA) umbrella.

However, Maserati isn’t the same brand as it was in the 20th century. Ferrari, who controlled the marque from 1999 to 2005, effectively transformed Maserati into Ferrari’s luxury division. Fiat has continued to treat the brand as such, and Maserati these days focuses on creating luxurious, big cars to compete with the likes of Mercedes-Benz, Jaguar and BMW. Maseratis are still sporty cars, but many feel as if Maserati has lost much of its more focused sporting character since Ferrari and FCA have been at the helm.

Luckily, old Maseratis still exist, although it’s hard to find many in good condition – modern Maseratis might be more boring (although that’s a matter of opinion), but they’re certainly more reliable. But that’s just Italian flair, you’ve got to take the rough with the smooth. Speaking of smooth, let’s get to the point: this 1997 Maserati Ghibli GT on sale in Floreat, Perth is an immaculate, sporty example of everything that makes Maserati great. 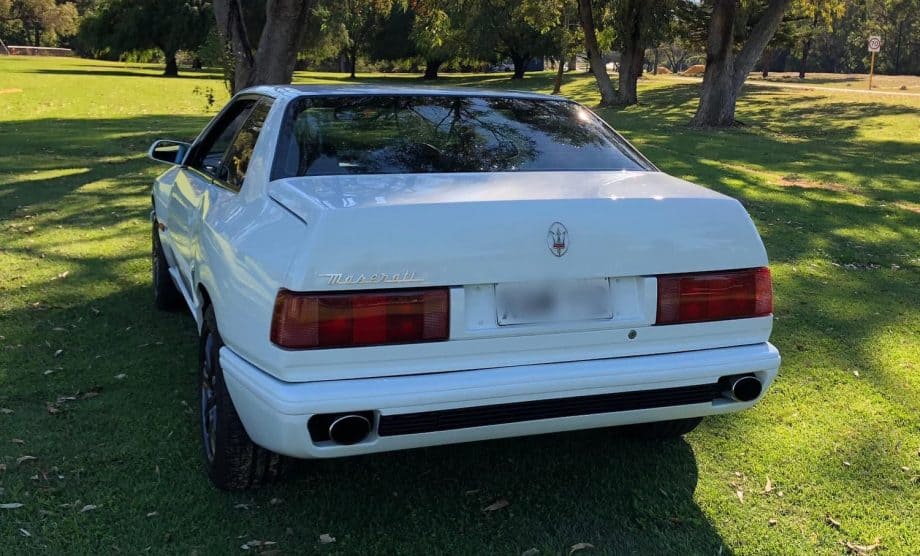 How do you say ‘nice bum’ in Italian? Asking for a friend. Image: Carsales

“Designed by Italian design supremo Marcello Gandini who penned the Lamborghini Countach and Alfa Romeo Montreal, the Ghibli GT had the highest ever per litre power output of any street-legal car [at the time], surpassing the Bugatti EB110 and Jaguar XJ220,” the seller relates.

“Very quick, have pod fillers currently fitted but original air boxes can be reinstalled if the screaming turbo induction noise offends. One of only three white Ghibli GTs delivered to Australia. Only 1063 of these bespoke Italian chariots were produced by the Modena factory, so [they’re] extremely rare.”

“Very rare Getrag 6 speed manual (most Ghiblis were supplied as 4-speed automatics). Interestingly this was the same transmission as chosen for the legendary BMW E36 M3. These cars were also fitted with the same Ranger differential that was fitted to their cousin, the sublime Ferrari 456 grand tourer.”

“This car spent a large part of its life in sunny/dry Western Australia, went east for 4 years and returned home in 2016. Only 68,400.00 km from new, serious money spent by previous owners… Retrospective engineering approval was gained for brakes as part of securing a roadworthy for this car when re-registering on its return to Western Australia [and the] braking test surpassed current 991 Porsche braking distances.” 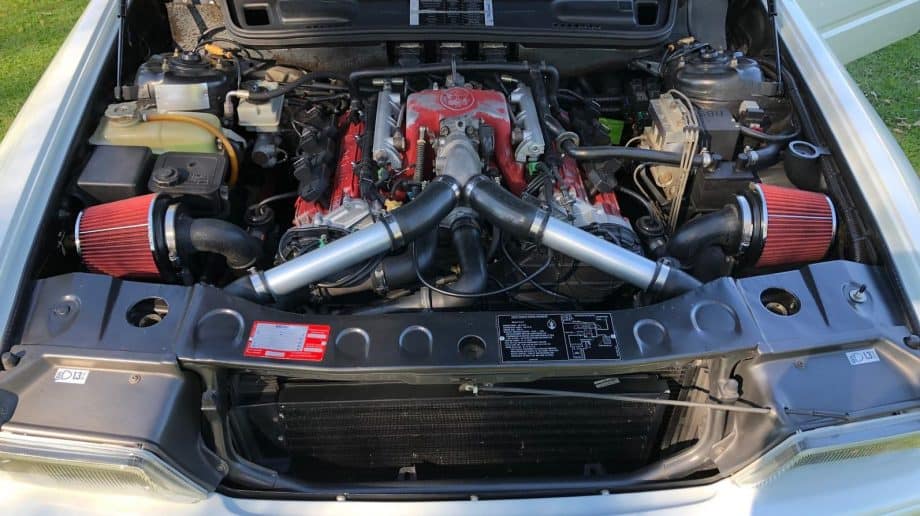 The Ghibli GT was and remains a particularly fast car: its twin-turbocharged 2.8L V6 made 228kW in the GT, the fastest version of the second-generation Ghibli ever sold in Australia. For reference, that’s only 32 more than the current third-gen Ghibli – which is a much bigger, bulkier car (that also has a more than two decades-newer design). Hell, you can’t even get a new Ghibli with a manual transmission; it’s not an option.

From an aesthetic perspective, the older Ghibli GT is a much more distinctive car, too. While it does share much in common styling-wise with the bigger Biturbo it replaced, it’s very much its own car. If anything, it looks more its contemporary rival, the Lancia Delta Integrale Evoluzione II, particularly in a paint job like this baby – although the Ghibli GT is much more refined and a coupé as opposed to a hatchback.

Inside, it continues to impress aesthetically. Swathes of luscious, completely unmarked dark blue Connolly leather and light blue Alcantara are contrasted by beautiful burr walnut trim. The steering wheel is not original (although the original is supplied) but it is period-accurate: the same wheel was fitted to the rarer, explicitly race-focused Ghibli Cup, which never made its way Down Under. 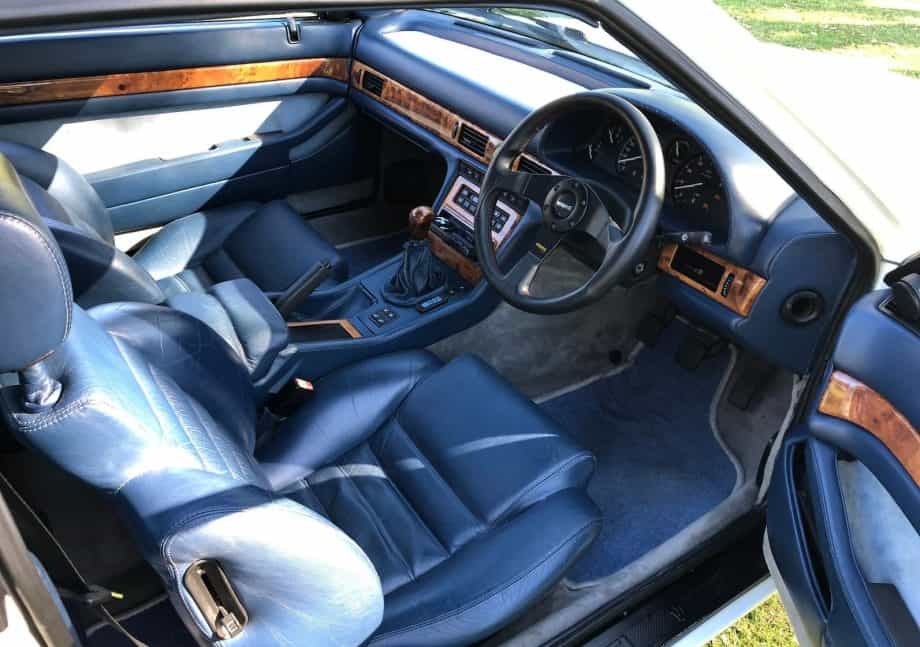 So clean, it’s almost as if no bunga bunga parties have ever happened in here. A shame, really. Image: Carsales

We’re strongly of the belief that the 90s is one of the best periods in time for cars. It was an era of technological innovation, striking designs and fun: cars really haven’t been as fun since. The past custodians of this Ghibli are clearly on the same page, because this car’s condition simply beggars belief.

Someone else who likes 90s Maseratis is Cary Joji Fukunaga, the director of the upcoming twenty-fifth James Bond film, No Time To Die. In the latest trailer for the much-anticipated picture, a fourth-generation Maserati Quattroporte from the same era as our lovely Ghibli GT can be seen attempting to run down Daniel Craig as the famous fictional spy.

If you want to get in on the 90s Maserati action, this spicy Ghibli GT is listed for an eminently reasonable $42,000 on Carsales. Get on it pronto.