The 72nd Primetime Emmy Awards, like many awards ceremonies this year, was a slightly more subdued affair than usual… Except for Dan Levy’s outfit.

Turning social distancing from a negative into a positive, the Emmys had a rather unique format this year: while host Jimmy Kimmel and some other celebrities presented from the Staples Centre in Los Angeles last Sunday, rather than have nominees turn up in person, the Emmys instead sent professional cameras and camera crews to nominees’ homes and mailed out their awards.

However, we think Levy’s outfit was the highlight of the entire show, the stylish Canadian actor and co-writer of Emmys-sweeping comedy Schitt’s Creek putting everyone to shame with his full Thom Browne suit blazer and skirt outfit, accompanied by combat boots and an Omega De Ville dress watch perched on his wrist. 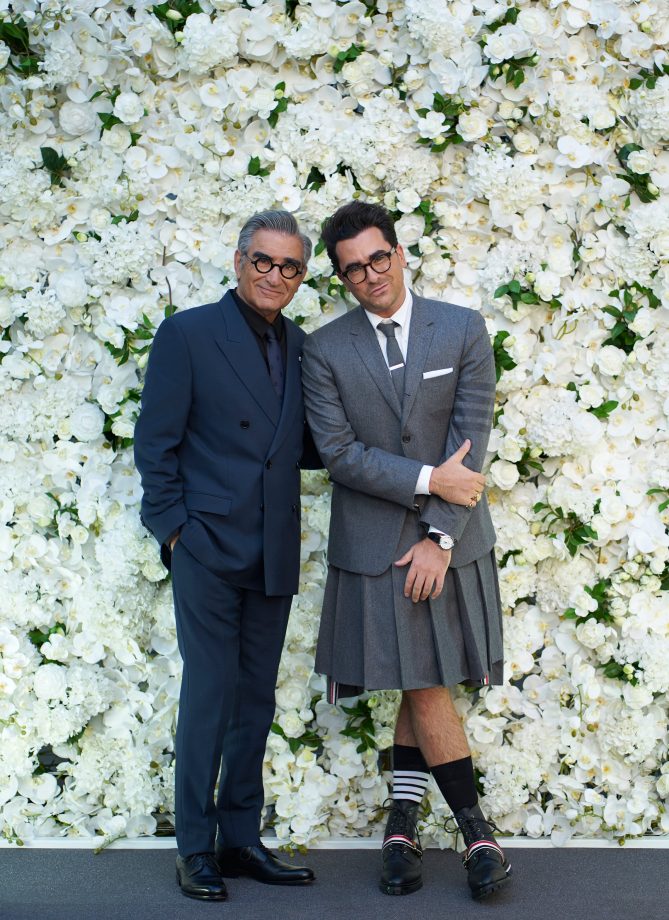 His father (also his co-star and co-writer on Schitt’s Creek) also looked pretty dapper in a contrasting navy and black Dior ensemble, but his look is far less sartorially imaginative than his son’s.

Levy, one of the most prominent queer actors in showbusiness and a high-profile advocate for LGBT issues, clearly wanted to make a statement through his unconventional outfit choice. Despite the fact that men have been wearing ‘skirts’ for centuries – kilts, cassocks, thobes, sarongs, fustanellas, you name it – the skirt is still broadly seen as a ‘female’ clothing item. Levy’s crisp skirt is a convincing argument for why men should perhaps lighten up in their attitude to skirts and rock them if they so desire.

Schitt’s Creek, a comedy series about a rich family forced to live out in the sticks after losing their fortune, swept the 2020 Emmys with its final season, winning all seven major comedy awards out of the eight categories they were nominated in — Outstanding Comedy Series, Outstanding Writing, Outstanding Directing plus all four major acting categories (lead actor/actress and supporting actor/actress) – setting a new record for most Emmy wins by a comedy series in a single season.

Dan Levy alone won Outstanding Writing, Outstanding Directing and Outstanding Supporting Actor in a Comedy Series. Oh, and Best Outfit of the Emmys. In case we hadn’t made that clear.