“Let it be known I did this under intense sufferance.”

Richard Mille makes some of the world’s most expensive and desirable watches. Founded in 2001 by the eponymous French watchmaker, Richard Mille timepieces have quickly become part of the highest echelon of haute horologerie. Instantly recognisable thanks to their distinctive tonneau shape; highly technical construction and design; celebrity endorsements from the likes of Felipe Massa, Margot Robbie and Pharrell Williams; and an unmistakable air of exclusivity, a Richard Mille watch is like a ‘sports car for your wrist’ (and are priced accordingly).

Even the cheapest pre-owned Richard Milles start at around 70,000 AUD on Chrono24. New ones – even the brand’s least desirable models – regularly go for over 100k. Richard Mille prices make Rolex prices look like chump change in comparison. How can the average watch fan hope to get their hands on a ‘Millie’?

Simple – by buying a fake one.

Let’s be clear from the get-go: wearing fake watches is not cool. Leaving aside the whole intellectual property theft angle aside, it’s an amateur move. It shows that you don’t really care about the art or heritage of a watch – you just want to look richer and cooler than you are.

But counterfeits these days are getting pretty good, and we were curious to see if the average Sydneysider would pick a fake RM from a real one (not to mention: whether I’d magically be bestowed with Rafael Nadal’s powers by wearing one).

We found a fakie on Wish for the much more reasonable price of $45.94 (including shipping) in August. Our first surprise was that it arrived in Sydney far quicker than Wish estimated – so score one for the fake RM. 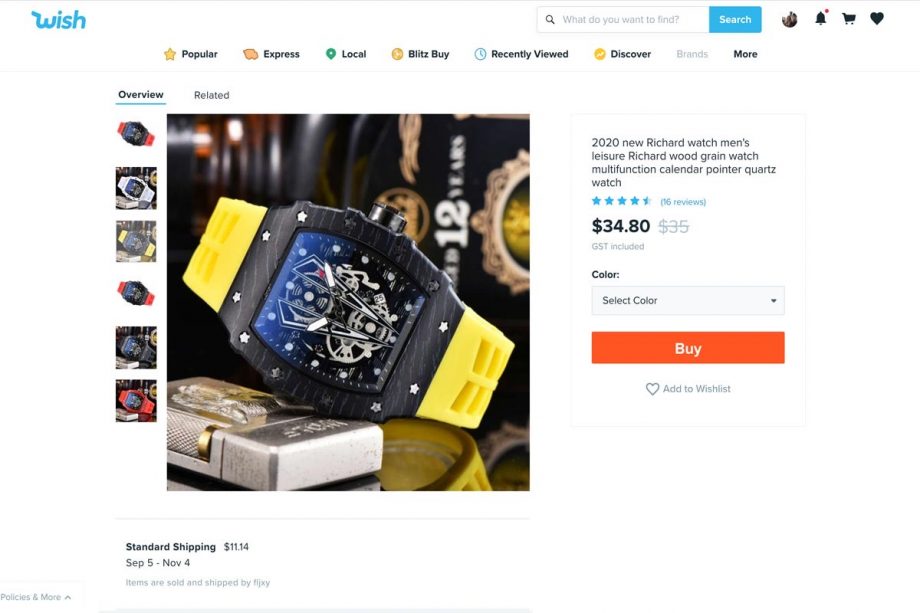 A screenshot of the Wish listing. Image: Luc Wiesman/DMARGE

We opened up our goodie bag… And that’s when the fun began.

The listing didn’t explicitly delineate which Richard Mille model the fake was supposed to imitate. Indeed, it’s a grab-bag of different RM models and features: the caseback says it’s supposed to be a RM 35-01 ‘Rafael Nadal’, but the dial more closely resembles an earlier Nadal collaborative model, the RM 27-03. The strap is unlike the strap on either of those models, however: it looks more like the strap first utilised on the RM 11-03 which has appeared on a number of models since. As far as we can tell, that strap has never come in yellow, either.

The ad describes the watch as having a wood-grain design – which it does, kind of, but no real RM has ever come in wood. The grain somewhat resembles the black Carbon TPT that the actual 35-01 is constructed from. In reality, the fake is neither wood nor carbon. It’s some kind of metal, probably steel (again the listing doesn’t really tell you much). It also doesn’t have a transparent caseback and the distinctive five-pointed rivets that adorn the case are just bits of plastic, as far as we can tell.

Laughably, the ‘movement’ that you can see through the dial is actually just a plastic graphic, although at a distance it’s surprisingly convincing, as is the case texture. The biggest giveaway it’s fake is the crown, which doesn’t even try to resemble any real RM crowns. It’s also incredibly flimsy. 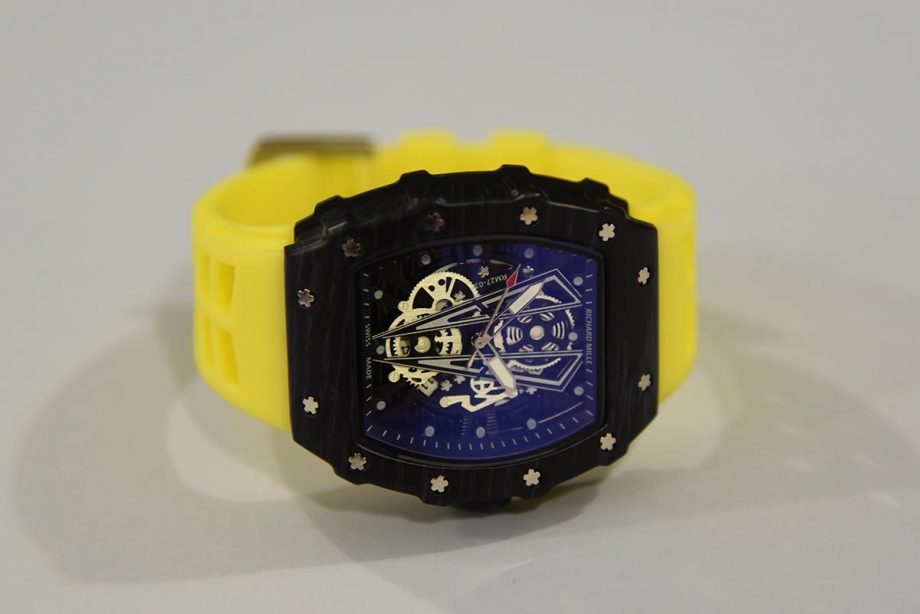 A closeup of the counterfeit. Image: Luc Wiesman/DMARGE

Other oddities about the fake: for some reason, it smells really strongly of coconuts. But that’s not actually a bad thing. Unlike a real RM, it’s quite heavy, especially considering that it’s just a quartz watch (another giveaway that it’s fake). The crystal is made of cheap plastic, and the integrated rubber strap feels particularly nasty. It’s also crumbling somehow where the strap connects to the watch itself.

The watch features no less than three different instances of the brand name, all in different fonts, only one of which is accurate. Funnily enough, the real ‘Richard Mille’ font is used for the name on the middle of the caseback, where you don’t see it. (It also says ‘Swiss Made’ on the back, which we highly doubt.) The lettering on the watch face is in Calibri and there’s a curved Richard Mille logo on the buckle, which is in another font entirely.

In other words: it’s a cheap and cheerful dumpster fire.

I was honestly surprised the thing even worked. It’s no more or less accurate than any other cheap quartz watch: it tells time, and the date wheel is shitty but functions. It’s not exactly easy to read – the cheap, non-lumed hands don’t contrast very well with the shiny plastic fake movement graphic so it’s not very practical.

It is, however, surprisingly comfortable. Normally, I take my watch off when I’m at work so I can type more comfortably, but I didn’t need to with the fake RM. The only other watch that’s had that honour has been a Jaeger-LeCoultre Reverso. The rubber strap isn’t very pliable but it does the job fine. The buckle, however, is awful. But what do you expect from a $35 fake watch from Wish? 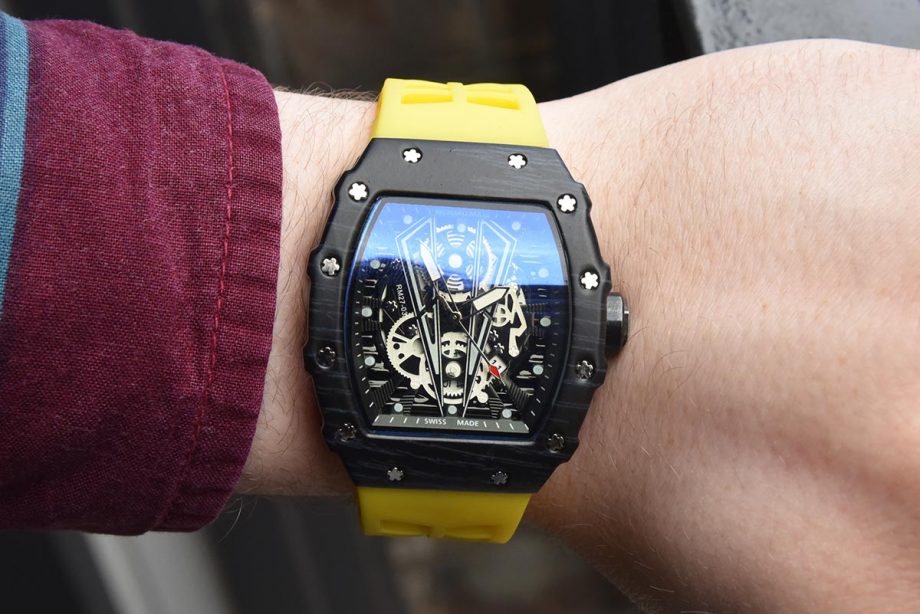 Did I Get Away With It?

In short, yes. So many people thought the watch was much more expensive than it actually was, or straight-up thought it was real.

I posted a photo of the watch to my Instagram story and dozens of people reached out thinking I’d scored a real ‘Millie’. Walking on the street, I could see myself getting sideways glances too – either people knew of the brand and thought I was wearing a real one, or they just found it to be an eye-catching watch. I even wore the watch on a date and got a compliment on it (although I didn’t get a second date, so I don’t know if that’s really in the fake Richard Mille’s favour).

Even my dad, who’s a bit of a watch buff, thought it was pretty convincing until I pointed out that the movement… Well, didn’t move.

But fuck, it was embarrassing wearing this thing around.

And that’s the point: you’d have to be a complete knob to unironically wear a fake watch, let alone a fake Richard Mille.

The problem with investing in many luxury brands is that they are so often counterfeited. The arms race between brands and fakers has been escalating for literally hundreds of years: Louis Vuitton’s famous monogram was first introduced in order to combat forgeries, but LV still remains the most faked brand in the world. Go to any Chinatown in the world and you’ll find dozens of fake Rolexes, too. It’s no surprise then that Richard Mille watches – some of the rarest and most exclusive timepieces in the world – have become the target for counterfeiting.

That said, I’m ashamed to admit that I quite enjoyed the intrigue and eyeballs. I felt as if I was in on a secret that no-one else was (I mean, quite literally, because I knew it was fake). I can see why people would buy fake (or real) Richard Milles: there’s nothing quite like the man’s watches.

Now that my time’s up, I might revisit the ‘Michard Rille’ of my own volition. As a party prop, mind. Not as a real timepiece. Who knows: maybe this could be the Cinderella slipper of the 21st century? I’ll see if my next date notices and report back.