Johnny Depp has always been known as having a rather eclectic fashion sense. Sometimes he comes up with unexpected masterstrokes, like this ‘distressed yet dapper‘ dernier cri he donned in Berlin earlier this year. Conversely, he sometimes really misses the mark, like with this baggy blue suit he turned up to a London court in.

We’re not sure whether this latest outfit of his is gold or gross, but it does reveal how one fashion item straight out of the 70s remains just as cool today as it did when Elvis was still knocking back peanut butter, banana and bacon sandwiches.

The Pirates of the Caribbean star was spotted at the 68th San Sebastián International Film Festival in Spain on the weekend wearing an unusual outfit consisting of a Ramones t-shirt, dirty-looking tan leather jacket, paint-splattered jeans, baggy newsboy cap, white-framed aviator sunglasses and two scarfs: a floral-print silk number around his neck and a rather incongruous Rastafarian-patterned scarf hanging out of his jeans pocket. 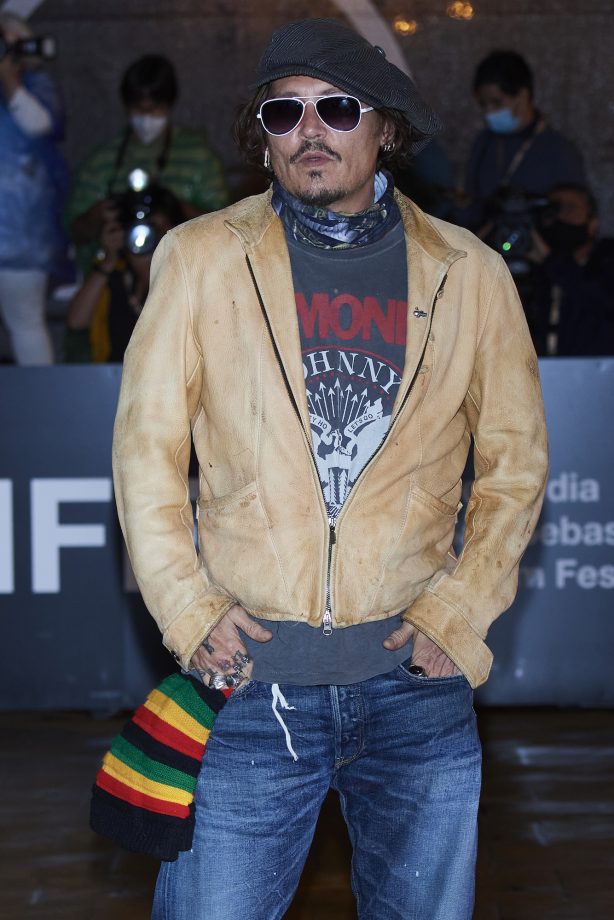 We’re going to be honest here: the jacket looks like it’s made out of human skin. It’s not one of his finest outerwear choices. The Rasta scarf also doesn’t make a huge amount of sense, nor does the newsboy cap.

His jeans look good – there’s definitely such a thing as too distressed, so the fact he’s shown some restraint on the denim front brings him back into our good books.

What is an exceptionally good style move is the Ramones t-shirt. For those of you who aren’t familiar with the band, the Ramones were a seminal early punk band from New York who grew to prominence in the 70s thanks to their iconoclastic style and ‘fuck you’ attitude; hard, fast and loud music; and their famous band logo which riffed on the the Seal of the President of the United States. A Ramones t-shirt has arguably become even more iconic than the band, up there with other clothing items like Thrasher hoodies or Yankees caps – people who may have never heard Blitzkrieg Bop, stepped foot on a skateboard or watched a game of baseball wear these things because of their fashion appeal and iconography.

Depp seems like the kind of guy who would have listened to the Ramones back in the day, however. Matched with the classic shades, slightly worn denim and surprisingly ‘punk’ scarf, the Ramones t-shirt works perfectly. Just ditch the dodgy jacket and you’d have a winning outfit on your hands.

It goes to show that classic 70s Americana never goes out of style. We’re seeing that adage further reinforced in 2020 with the continued revival of loud prints, creative colour choices, boat shoes and stylish militaria.

A 70s band t-shirt is a great way to show your taste and make just about any outfit look good. Just make sure you know at least one Ramones, AC/DC or Iron Maiden song before you slip some of their merch on, would you…