“This Sydney house will no doubt be the talk of the town.” 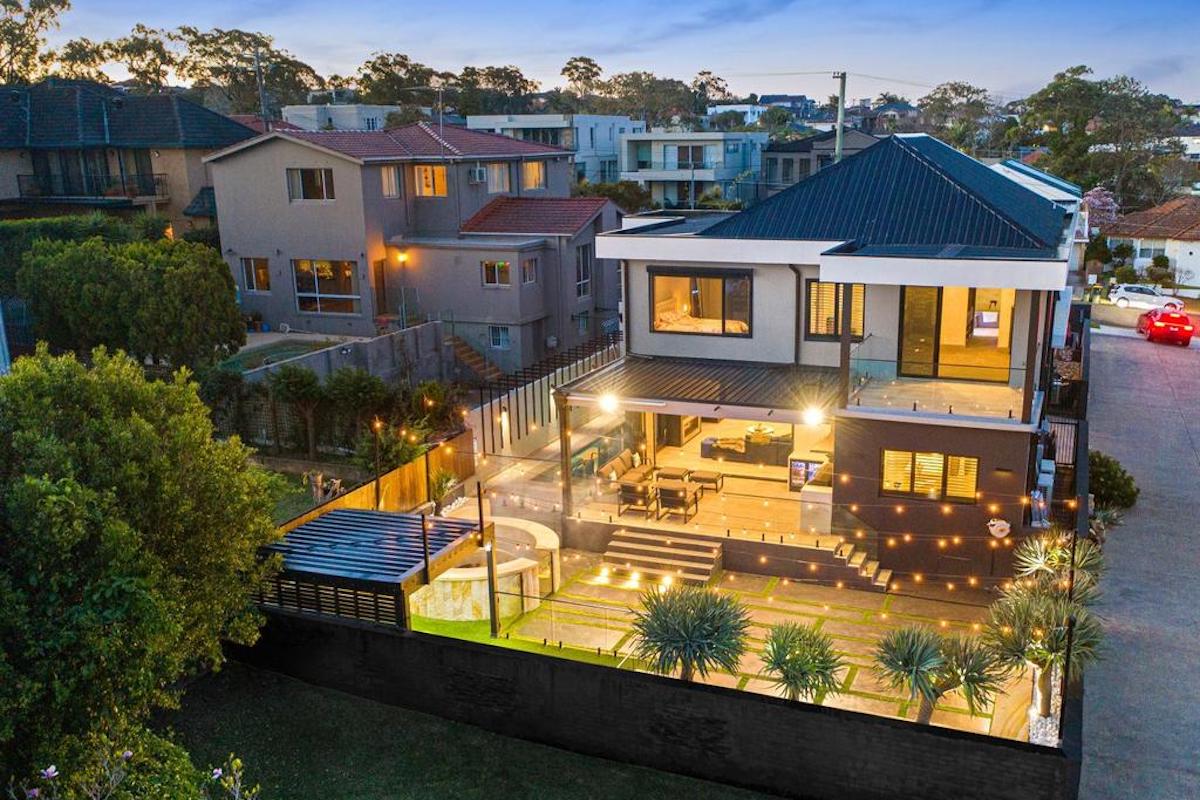 A funhouse, but not a madhouse: 66 Townson Street, Blakehurst, NSW 2221. Image: realestate.com.au

Even though restrictions have eased somewhat in the Harbour City, Sydneysiders are still largely reluctant to go out in the same sorts of pre-COVID numbers. Which makes sense, and is probably for the best – there’s still no vaccine and it’s not as if The Bat Kiss has got any less virulent.

So most of us are still homebodies. Which is fine, until you run out of books to read or games of Scrabble to play.

However, the owners of this property in Blakehurst in Sydney’s south probably aren’t facing the same levels of boredom as the rest of us plebeians, as their ‘no expense spared’ house has more than enough to keep even the most easily distracted satisfied.

“With a mini-golf course, 4K cinema room, a hand-built fire pit and a heated lap pool, this Sydney house will no doubt be the talk of the town,” realestate.com.au relates. 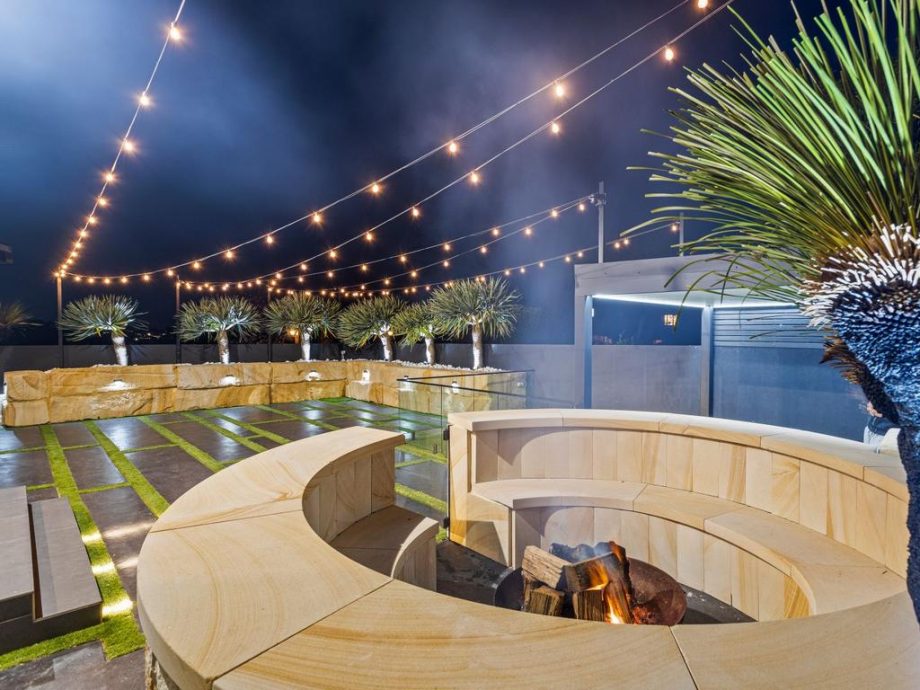 The fire pit reminds us a bit of ‘Love Island’. Image: realestate.com.au

66 Townson Street doesn’t sacrifice fun and games for comfort, either: “all four bedrooms are oversized and feature walk-in wardrobes and ensuites. The main bedroom is complete with water views and a stunning ensuite with a freestanding stone bath, shower and his/her vanity, while two other bedrooms have private lofts.”

“Behind the central hub is the rear entertaining desk with a built-in barbecue, pizza oven and bar fridge. This overlooks a stylish backyard with a custom 14-seater sandstone fire pit and a heated pool. The double garage features the other highlight of the house – a cinema with a 130in screen, 4K projector, surround sound and a fully stocked bar.” 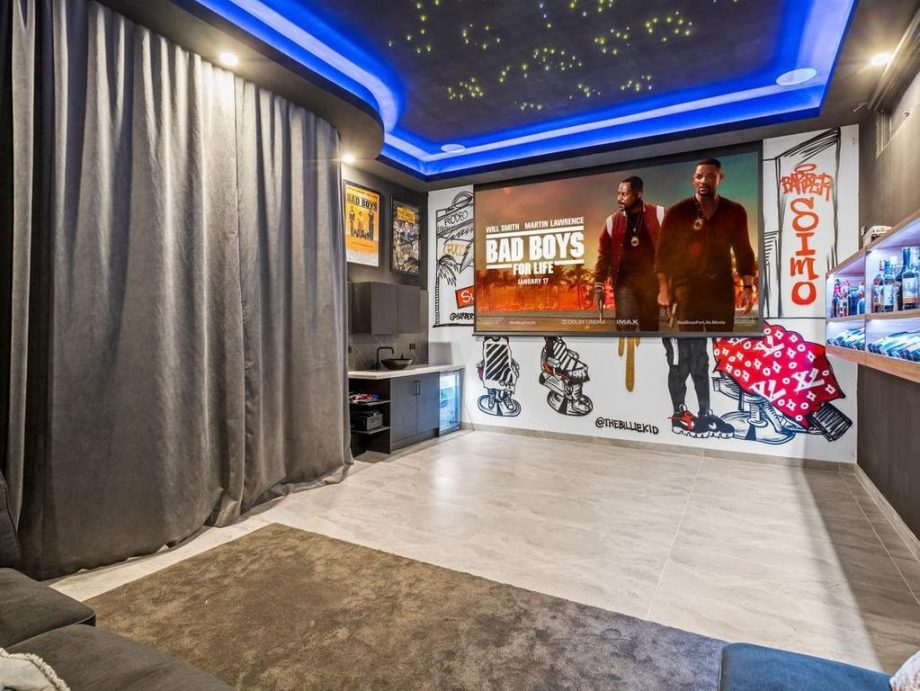 We’re not sure how we feel about the graffiti-style mural that adorns the back wall of the home cinema – it stands in stark contrast to the ‘classiness’ of the rest of the property. You can’t deny it’s a unique feature, however, and it’d be a shame to get rid of after so much effort has gone into it. We’ll leave that decision up to the buyer.

The open-plan living space is the perfect environment for a house party (don’t forget that 1.5m social distancing!): the large, high-end kitchen, replete with a butler’s pantry, is an entertainer’s dream. Designer appliances and plenty of prep space mean you’ve got all the tools at your disposal for any COVID culinary experimentation you want to try your hand at, too.

Two particularly luxe features of the living area include a built-in fireplace and a full-size aquarium. They are next to each other, however… Hope the poor fishies don’t get fried. 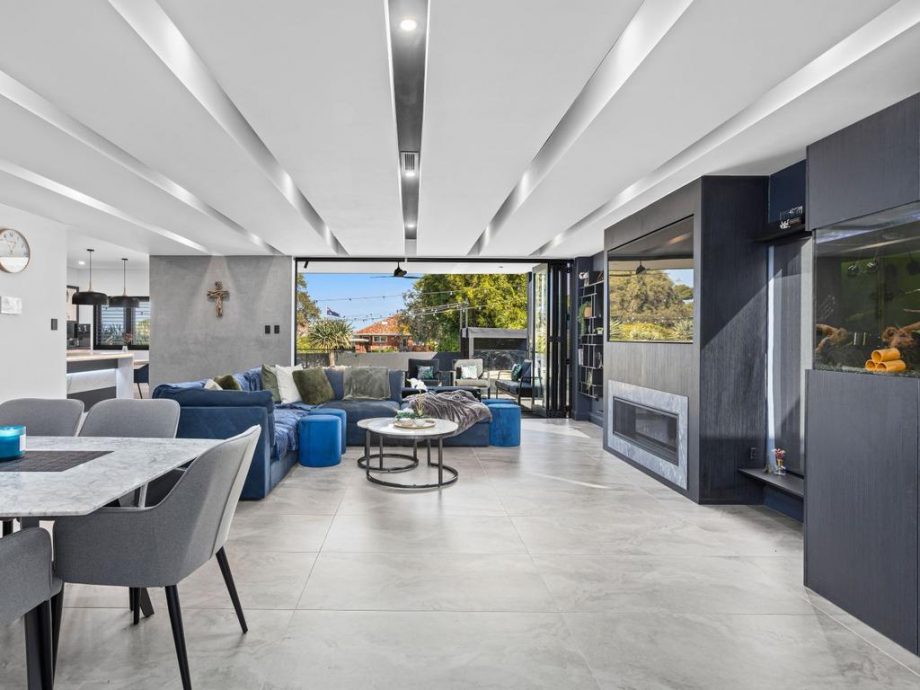 Watch the TV, fire or the fish – either way. Image: realestate.com.au

Blakehurst itself, billed as a “blue-ribbon locale”, is also a particularly nice patch of Sydney to locate oneself in. Only 18km from the CBD with sweeping ocean views and proximity to the Sutherland Shire’s fantastic beaches like Cronulla and Shelly, you’re well-placed for when society gets back to normal or if you need to bunker down indefinitely (here’s hoping it’s more a case of the former rather than the latter).

Currently open for inspection, you can check out 66 Townson Street on realestate.com.au.