“Ensuring the continued repatriation of passengers to Australia is becoming increasingly challenging.” 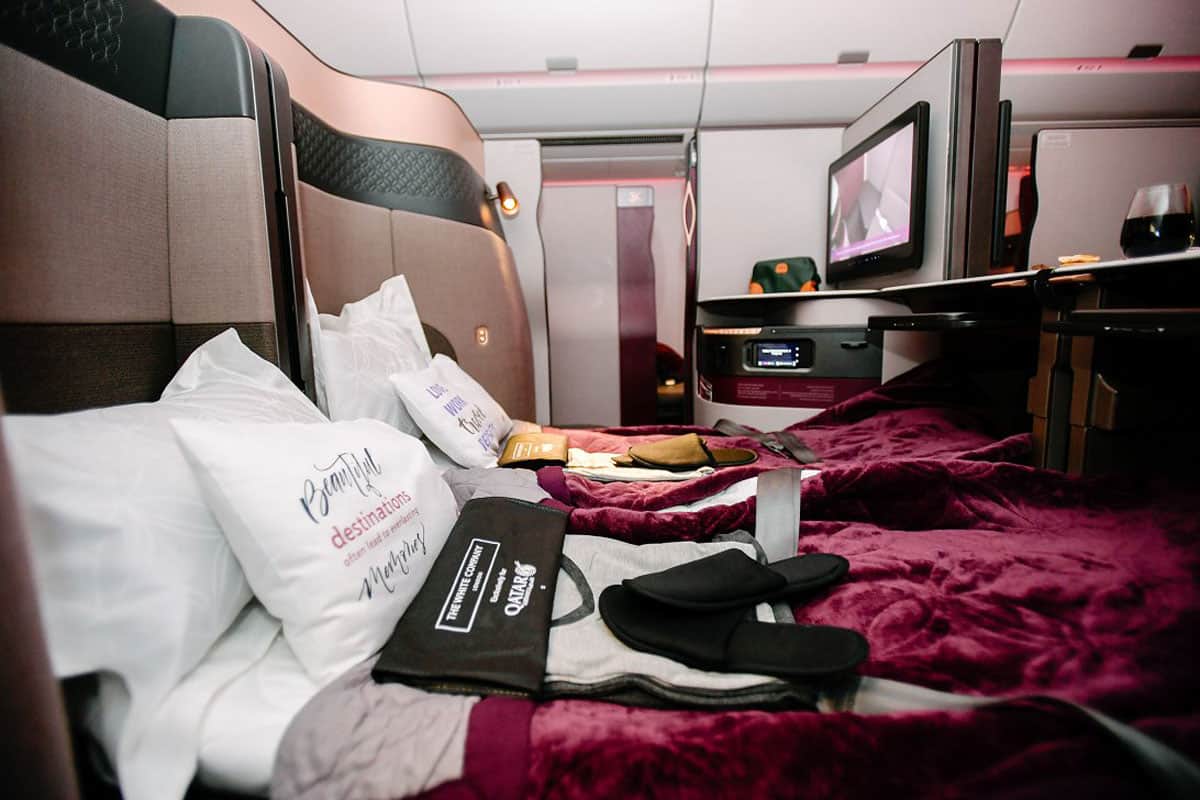 Since the Australian government slashed the international arrival cap from 6,500 per week to 4,000 per week in July, ‘passenger culling’ has become the airline trend du jour.

On the one hand: carriers have a vested interest in keeping customers happy. On the other: they are trying to keep afloat during the most difficult period in commercial flying’s history, amid strict government regulations.

This has led to the prioritisation of business class ticket holders, and a whole lot of bumping and shuffling.

Australians like Jaynee Wehbe, global sales director at TRIANGL, who earlier this year was granted an exemption to leave the country to go to Ibiza and Italy on business, have been forced to book and rebook new tickets – at the pointy end – to ensure a flight home.

Jaynee told DMARGE in August: “I think 90% of the flight on the way home was business. It was easier for me to use the economy toilets rather than business that’s how empty economy was.”

“I only saw a handful of people in economy, mainly business and first class only.”

Jaynee is far from alone. Australians like Jim Collins and his family, who in July had been trying to get home (to Australia) from the UK since March, told the ABC in July, “We’ve repeatedly tried to get flights … And every time we’ve been able to do that, the flights have been cancelled.”

Last month, DMARGE reached out to Qatar Airways to seek comment on this phenomenon, after noticing a number of complaints (levelled at almost every airline still operating) on Twitter.

Just heard from a friend en route to Australia from U.S. that with flights limited to Sydney, Qatar Airways is only placing those who upgraded/paid for business class on those flights. Must be nice to be rich! Can you confirm this is your policy @qatarairways?

Qatar Airways told DMARGE: “Due to the limitations on passengers travelling to Australian destinations, Qatar Airways analyses each flight on a case by case basis to ensure we facilitate onward travel to the final destination for as many passengers as possible.”

Qatar Airways last week added to this, with a public statement highlighting the challenges passenger caps bring, and explaining how the airline is tackling them.

“Qatar Airways has been in regular communication with the Australian Government since the onset of the pandemic to provide, in addition to nine repatriation charters operated to/from Australia, extra capacity to help bring Australians home,” Qatar Airways announced.

“Due to the cap on international passengers, travelling to Australian destinations, based on limitations of quarantine facilities, Qatar Airways can only carry a limited number of passengers per day to all of its Australia destinations, resulting in thousands of Australian citizens and residents being unable to be accommodated on flights in the coming months.”

“Despite the challenges, Qatar Airways is operating a robust Australian network to five cities, Adelaide, Brisbane, Melbourne (currently no inbound passengers permitted), Perth and Sydney to facilitate ongoing repatriation and is currently operating more flights than any other international airline.”

“Due to the dynamic nature of the pandemic, airlines operating flights to Australia have faced ever-changing restrictions, often imposed on short notice. Because of the continuous changes in restrictions as announced in Australia from time to time, passengers have experienced a cascading effect of restrictions affecting both previous existing bookings for flights scheduled during the first announced period of restrictions and new bookings that were made for flights scheduled for dates beyond the first announced restricted period, but are now included in the current extended restriction period,” Qatar Airways added.

“These combined restrictions have resulted in many passengers having their tickets rebooked onto later flights several times as demand exceeds the new caps announced.”

“With the recent extension of restrictions until late-October, Qatar Airways can only transport a maximum of approximately 4,500 passengers during this time. As a result, every day hundreds of people are advised that they cannot be accommodated on their booked flight and need to be rebooked for a later date where there may be availability. To further limit the impact of the restrictions, the airline has already stopped accepting any new bookings for flights to Australia until the current passenger cap is relaxed.”

Qatar Airways Group Chief Executive, His Excellency Mr. Akbar Al Baker, said: “Ensuring the continued repatriation of passengers to Australia is becoming increasingly challenging… Given the restrictions, we cannot accommodate these passengers on an alternative flight the following day where we face the exact same issue so the problem continues to grow on a daily basis. We are working to prioritise cases that are emergencies or require urgent travel, but many cannot be immediately expedited.”

“While the airline realises the need for restrictions to limit the impact of any possible second wave of infections, many passengers will be unable to travel back to Australia for the foreseeable future.”

To conclude, here are the key facts.